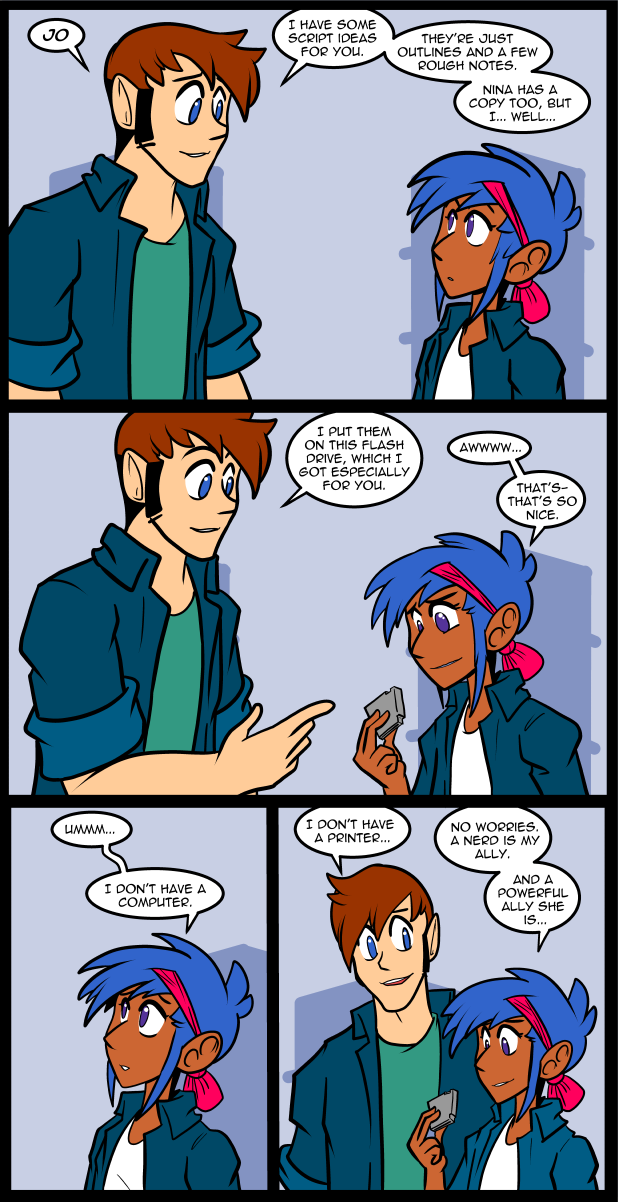 There exists part of an old story I wrote ages ago that I think would be a good base for Jo’s movie. I might have to alter it a bit but I think I have enough for it to make sense within the framework of the comic. If I were more skilled I’d probably make a comic version of that movie concurrently, so you guys could see a completed story of what she ends up making, but I doubt I’ll ever be able to. Then again, you never know. Maybe I’ll get to a point where I feel well enough to do such a thing. I’d do that one in black and white, and keep it at regular print dimensions though. That would make it much easier to print up later, compared to Between Failures; where I just made it however I wanted after the first two stories, I think, and it’s random and hard to format.
I’ve got such a backlog of stuff to do already this is really just mental preparation for some future that might happen after I get all that done.

I went to the doctor today and they took a jug of blood. It was thick and hard to get out of me, even though I tried to drink plenty of water. She told me that I need to stay hydrated, but not too hydrated, and that the drugs I’m on may contribute to my heat sensitivity. That said, my foot actually went back to being foot shaped after… I have no idea how long. It still swells up when I do certain things, but it returns to footness after a bit now. I’ve reduced my intake by quite a bit and there are no longer as many bad foods in the house, so I can’t get all crazy and graze at night, or whatever. Mom, the Teen, and I have also agreed that we only get one day for special food now, which is how it was before the Teen moved in with us. The results have been pretty obvious. What with the foot and all. So things are looking up hopefully.

Printers are available at Goodwill for $5 (and sometimes you can get a pack of paper for around $2.) Put off buying that game for 2 weeks and you can have one!

And it’s cheaper than a flash drive!

Maybe, but there’s a good chance there won’t be a driver for them on Windows 10.

I KNEW there was a reason not to downgrade from WinXP :()

Eh, flash drives can be had really cheap, too. As can SD cards. You’d have to work really hard to find a storage medium that isn’t big enough for script text.

But I suppose hardcopy would have the advantage of being available on a shoot without worrying about battery. One of it’s few remaining advantages.

the problem with goodwill printers is finding ink for them

Been cannibalizing old toner cartridges to keep my $5 laser printer alive for years now. Things can be a little dark for awhile after a toner refill.

I have thick blood also and am ALWAYS dehydrated. My body doesn’t hold onto salt so I just pee water out that I drink within 30 minutes. Anyway, I started horse chestnut extract. It’s supposed to be a natural blood thinner. All I can say is that im noticing changes in skin tone/texture, I don’t have cold hands/feet and I’m actually GROWING nails- my digits are actually getting nutrition from my blood. It helps and is relatively harmless. I’m sorry into immunity sucks ass.

Thick blood? Blood thinners? My wife is a hematologist, and she uses the term ‘ blood tHinner’ to mean something that keeps the blood from clotting. It’s used for patients that are at risk of having their blood clot without an injury, thereby preventing it fron getting to a part of the body. These are used only with frequent monitoring of various biochemical signs and clotting speed. If blood doesn’t clot enough, it’s dangerous too — you become leaky and bleed sasily, even internally.

I haven’t heard the term ‘thick blood’ used except by a nurse telling be about diabetes. It seemed to be her explanation about why diabetics have trouble with their feet. My wife told me that terminology was nonsense and what was really happening was some complex Biochemistry involving sugar and fat metabolism. If your condition is relared to type two diabetes (mine is) avoid sugars, though you still need some, and dietary fibre is your friend. It slows absorption of sugar, so your nutrients last longer after a meal.

If this is the Nerdopean Union, I hope we don’t have a Brooksit referendum.

UGH! Please don’t tell Jo to get all political, and stuff, because then she’d leave her circle of friends, and she’d call her exiting: a “Brooksxit”.
:D

At least, I think that’s what you’re talking about.
Or maybe, she’ll remain in her “union”, and do a: Brooks-remain.

I take it that ally is Alex?

Exactamundo! She lives on her computer when she’s not working or geeking somewhere else.

Also what is your profile pic of? Is that just a teddy bear?

Having nerd friends is always an asset.

Is that flash drive in the shape of a miniature NES cartridge?
I’m of two minds on those novelty flash drives. On one hand, they’re cute and/or neat, depending on the design. But on the other hand, they almost NEVER come with anything but really low storage capacity. Four to eight GB is most common. I have seen a 32 GB stick shaped like a Lego brick. But if you want 256 GB? It probably won’t look like a 1-Up mushroom.

My biggest problems with novelty flash drives are: One, they tend to have a cap that can”t stay attached to the drive while it’s in use, and Two, they’re usually way more expensive per gigabyte than one in a no-frills casing.
(Also, you want “really low storage capacity”? My first flash drive held 256 MB. Not GB, MB.)

I had been wondering what the shape of the flash drive was. Thanks for clarifying.

I also have my original 256 MB flash drive. I still don’t think I own anything over 1 GB.

I once had a flash drive for work that was 32 MB. It was pre-loaded with a firmware update for Sony TVs, and the USB port on some of them were hard to get to and required a shorter than normal drive. This one looked like a wireless mouse adapter.

It’s good to have powerful allies — and nerds are best if you’re not a techie. I suspect that flash drive won’t work and play well with other — USB connections.

“She told me that I need to stay hydrated, but not too hydrated…”

I think DocSpeak is a dialect that lets you say something more or less helpful, but avoid something that could be used against you in a malpractice suit.

Doc-speak “She told me that I need to stay hydrated, but not too hydrated”

I notice a distinct lack of clarification on the part of the doctor.

internally or externally hydrated?
if internal, oral ingestion or enema?
so if I’m thirsty, I’m supposed to take long soak in a bath?
do I get out before or after my fingers get all pruned?
should I replace all my clothing with hydro-gel polymers?
how much is too hydrated? 2 bath tubs? or a swimming pool?

Well, “dehydrated” to the medical folks means you don’t have enough liquid within you. So I would assume that “hydrated” from a medical sort usually refers to internal hydration, not external. (With a possible exception if the medical sort is a dermatologist, but even then I think they would specify external if that’s what they mean.)