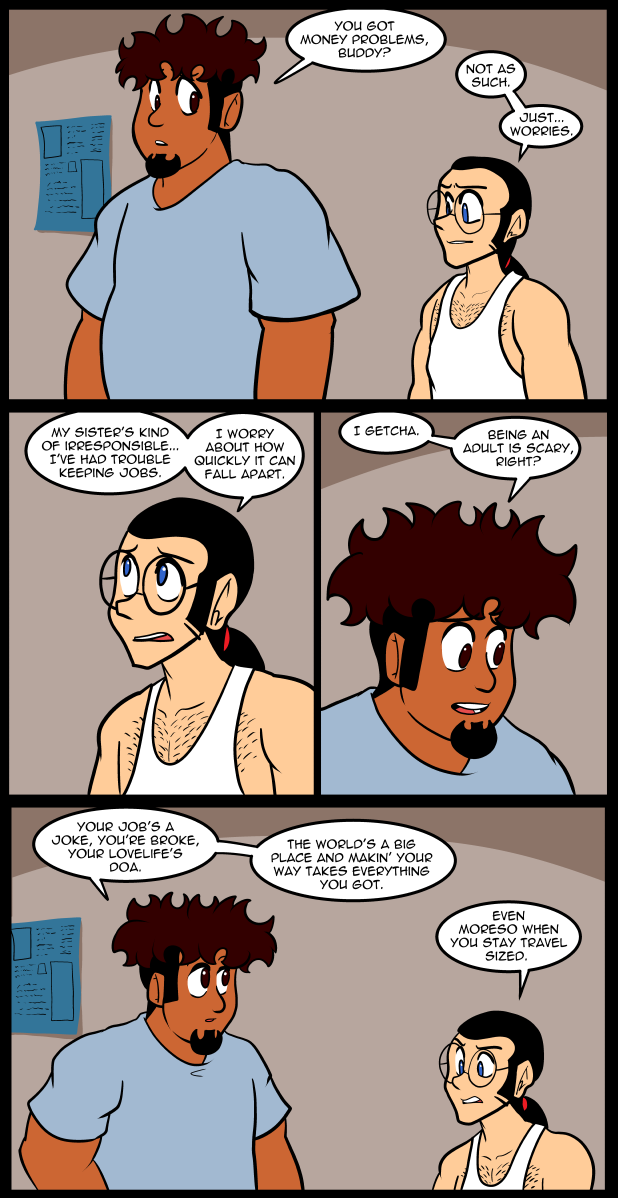 Mike is not as good at advice as, say, Thomas, but he does know a lot about old television shows. That might be part of why he is the way he is. He kind of believes that everything will be okay if you just make it to the end of the episode. Either Ed isn’t picking up on the references, or he’s ignoring them. I’m not sure which. I think with Mike he understands that what he says tends to come from a place of wanting to help, but not knowing how exactly. In many ways Mike is a much more pure person than the rest of the cast. He wants to do his best and help other people do their best in a way that is more selfless than Thomas, or Jess. Early on people tended to see Mike as an antagonist, but he never really was. If you look back on the early pages he’s doing his best and the other characters are the ones reacting as if he was the cause of the problem when he really isn’t. He’s seen as an outsider though. They don’t trust him, so the reader tends not to either. The good intentions always show through though and he becomes part of the family. Mike really could be a great leader if he had confidence in himself and followed what he knows is right. The problem for him is he’s caught in a framework that is broken at the corporate level. It’s actively working against him all the time, but he resists. I think that’s what eventually endears him to everyone. I bet if you worked with Mike after a while you’d get the feeling that he’d stick up for you if you were unfairly treated. He’d never ask you to do a job he wouldn’t do himself if he could. When he’s in trouble you’d want to help too.

Considering he’s a man in his early 20s, Ed might not get the Friends reference, and I’d be surprised if he got the Cheers one. I’m early 30s, and I barely got that one, and I watched the whole series on Netflix a couple of years back.

I’m 20 and I’ve seen Friends. I got the reference right away. Cheers you have an argument for. I didn’t get that one.

Since they’re available online I took a chance. Even if people don’t get it the awkwardness comes across.

Scrolled down here and was astounded people didn’t get the Cheers reference. There are still people who haven’t watched that show?

I prefer tossed salad and scrambled eggs myself.

Yesssss! I’ve seen most of Frasier. Just not Cheers.

I’m in my 30’s. I watched Cheers when it was on TV. Did not get the reference because that was 20 years ago and it just wasn’t taking up headspace.

I remember my Dad watching Cheers when it was on in the late 80s or early 90s, enough to remember the chorus of the song (I always get frisson when I hear that part), but I also remember not caring about the show, as I was about 5 or 6 at the time.

I actually got both references, and I never actually watched a full episode of Cheers; my parents used to watch it.

Didn’t get it but then i haven’t had a TV scene the early 80’s tried watching some on you tube. it is surprising the pure drivel that is on TV.

Oh man I had to read it a couple times to catch the cheers reference lol. Almost missed it

It just goes on and on my friend…

Some people started singing it, not knowing what it was….

No one else did. I have to be the one…urgh.

It is interesting just how my perception of Mike has changed over the course of the series. I don’t think I ever truly saw him as an antagonist, not with how Thomas rode roughshod over him from the get-go. But I definitely saw him as a dim guy to be worked around, rather than worked with.

I think the nerf gun fight was the first time my viewpoint on him changed. It seemed like he’d be a fun guy when he loosens up, and I saw him as a source of more wacky store-related hijinks.

Now… it’s nice seeing how supportive he’s being. It’s also nice watching that correspond to how competent he is at his job. I will be sad if he turns out to be a true “sixer”. I feel like everyone would fight to try to keep him. Even Reggie might try to pull some favors for that.

Hey baby, I hear the blues are calling tossed salad and scrambled eggs!

Sorry, i had to :) You very rarely make spelling errors, but this exact one i’ve seen you make many times over the years :)

To save me typing, here are the lyrics.

The theme song was the best part of Friends.

I had a boss like Mike who wasn’t afraid to get in the trenches with us. Immediately earned my respect… even if he did end up firing me a year later. No hard feelings, though. I’m sure we’re both in much better places in our lives.

When I worked as a gopher on a construction site, the place we rented a lot of equipment from’s representative was a nice looking lady in business clothes that would take doughnuts to the bosses. Later at a different site working for a different company, the rental guy shows up with a water pump in a pickup. He asks us (who happen to be standing in a huge puddle) how things are going. I say they’d be a lot better if that pump was out here. He grabs it and proceeds to slog it out into the puddle. Surprised the hell outta me.

I can see how some readers saw Mike as kind of an antagonist, since he seemed to be in charge, + telling people not to mess up…in the beginning, which can make some readers see Mike as the heavy in the early stories.

Kind of like:
John Cleese was kind of surprised when Basil, in the Fawlty Towers [ TV show], was getting a lot of sympathy from the crowd.

Cleese said that Basil was a really big jerk to everyone. But- I guess Basil got a heap of sympathy, because, in his mind- he was just trying to do his job, and run his life, without everything screwing up.

Well, Basil was your typecast, tight-laced but extremely dopey Brit. Everything he didn’t want to happen would by his own hand (or mouth) unintentionally, and especially when there were well-paying customers. It’s too bad that he never decided to give one of the fussy customers a “damn good thrashing”.

[ It’s too bad that he never gave a customer a “damn good thrashing”.]
Yeah, I’ll second that. :D

I got both references, but I’m in my mid-forties so best possible target. I wouldn’t say his love life is DOA, but then again, I wouldn’t say that about most of the cast of Friends either.

What’s he talking about? Ed hooked up with Nina.

Is that history already..?

It was stated that Mike’s advice is poor, and he obviously wouldn’t know everything, but Ed’s love life was DOA until Jess pushed him to take Nina before she was taken. However, I can’t say anything about his current job or hourly rate at his Blockbuster/Bull Moose hybrid store.

Ed’s gone jogging with Nina, and maybe gotten a hug from her, but I don’t think things have gone any further than that. I certainly don’t think they’ve “hooked up” yet, unless I’ve totally forgotten some development.

Mike doesn’t know about Ed and Nina as he’s their manager and that would be against the rules. Ed hasn’t told him.

You roll out of bed, Mr. Coffee’s dead, the future’s looking bright.
And your shrink ran off to Europe and didn’t even write.
And your husband want to be ….. a girl.
Be glad there’s one place in the world!

Yeah… No surprise why they didn’t use that verse for the theme song.

I was wondering whether that was a Cheers reference, only because the phrasing is so different from the song’s version. Also I don’t think that couplet was in the actual opening? Maybe it was just cut out of the version I saw to make room for more ads.

Its internationally messed up because he’s misremembering it.

I got the Friends reference, but I don’t know any of the Cheers theme except the line “You wanna go where everyone knows your name.” So I didn’t catch whatever the Cheers ref was. I’m plenty old enough — hell, the other day a piece of a kids show theme song from the late ’60s or early ’70s floated through my brain — I just never got into Cheers.

If anyone’s curious, the show in question was Lancelot Link, Secret Chimp — that link takes you to the theme song on YouTube, this one to Wikipedia. Think secret agent comedy a la Get Smart, only with chimps instead of humans.

Yeah, I know, whoever came up with that was almost certainly high on something. It was the Sixties, ya know? And no, the Sixties didn’t end until at least 1974, for the pedants who were about to say “No, it was the Seventies.” Trust me, I was there.