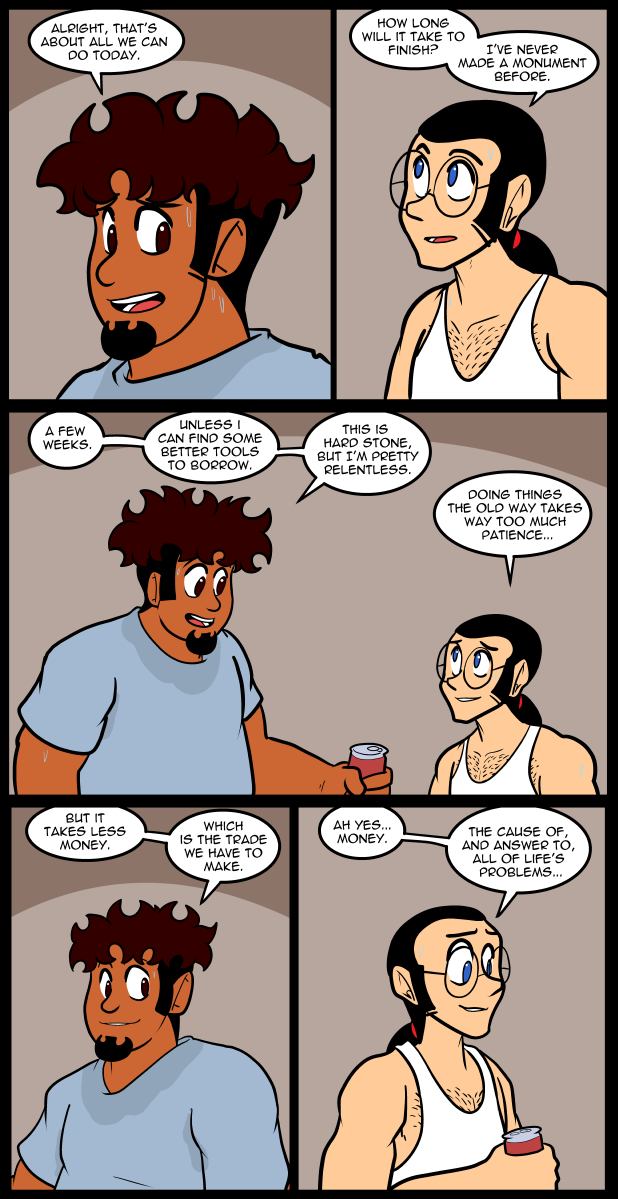 Money can’t buy happiness, but it sure as fuck can rent it.

I’ve been listening to videos about attractions that no longer exist at various amusement parks. It’s weird because I remember seeing shows about some of them when I was little, but I’ve never been to them and just sort of assumed they existed forever. Since they don’t interest me I never thought about it. The story of the evolution of the rides is interesting though. The thing is, these stories are a really perfect example of how history works. For a lot of those old attractions there’s no clear video, or even accurate photographs. They exists as stories and will eventually be legends more than anything. The Country Bear Jamboree is a great example. Even as someone who never went to Disneyland I was aware of the country bears because Disney was such a huge deal on TV. It’s been gone for over a decade. Even before that it had been altered twice, so the original experience was lost before then. That whole thing is just a weird memory now.
There are people who document stuff like the evolutions of Disneyland now. Really dedicated people. And there are people who collect the parts and sell them to collectors and stuff. It’s like a small scale version of how archeology works.

I also came across a story of a girl who was killed at one of the attractions which I though was just a legend, but it actually happened. I think it was called America Sings. Anyway, the stage would move and she was supposed to stay in a chair when it did, but she used to gambol about and see how long she could wait until she had to step back. One day she misstepped apparently and her head was caught by the mechanism and crushed in front of a crowd of guests. Her parents tried to sue but the witnesses said she had been out of her seat when it happened, which was not what she was supposed to do, so they got a small settlement. Anyway the designer of the ride blamed himself for her death regardless. I have to say it does strike me as a design flaw, but whatever. You can look it up. It’s listed in all the stuff about America Sings. It happened, like, nine days into the opening and the stage was redesigned to break away if anything similar happened. The stories differ by the source, which is also how legends change over time.

In any case it’s interesting to watch since I haven’t been able to find any good documentaries or anything recently. The Disney stuff has that feel of learning something even if it is oftentimes pointless information.

The amount of deaths inside the parks aren’t abnormal for an amusement park, but they are almost all gruesome and freakish. Generally the cause is the victim’s stupidity.

Teen corner
I’m back again peeps. although I still don’t have much to say considering I have zero life. I went to my brothers for a weekend and it ended terribly because we got into a fight. shocking. I ended up coming home early. I went and tried to do some more senior pictures which ended with me falling out of a tree I tried to climb into and I’m covered in bug bites that are giannt and terribly itchy so that was productive. other than that i’ve been binge watching orange is the new black and finished it about an hour ago. I made a coconut cake from scratch for fathers day which was a pretty tasty success although it was a rough day in the beginning. oh and i broke up with my boyfriend of almost a year. I know my life is so interesting. my mind is still pretty set on thinking about how I’m going to have to adult soon. I even made a list on amazon of things I’m going to need to buy for my place when I move out. yes this really is what I’m wasting my summer doing. its sad really.

Are there zombies lurking about? :)

Wait, that’s pretty much down the street from where I live… Huh… I wonder if there’s still access?

I know that place. Used to live in San Marcos once upon a time. The submarine theater was kind of hokey, but essentially good natured. The “glass bottom boats” (they had a glass viewport in the center of the boat so you see what was beneath the water) was interesting. We had a family membership to the pool and the golf course would give unused tee times to those of us in the youth league they ran. There were also some kiddie rides, I think, and a sky ride was added while we lived there. Amusingly, the documentation for the sky ride was in German and Aquarena Springs call our house because we had a German surname. They were looking for somebody who could read the docs and were literally calling people with Germanic names from the phone book. I guess it seemed feasible because there were fewer than 10,000 phones and you only had to dial four digits to call anyone in San Marcos. It was as though the whole thing came in a big kit and they couldn’t figure out how to put it together. Can’t imagine why they didn’t call the foreign language department at Southwest Texas State University (now Texas State University) first thing. They eventually got it put up and I remember riding it.

The same can be said for beer.

Mike seems quite reliable with this kind of things.

Having worked at an amusement park, I am reliably confident in saying that a majority of incidents (from as minor as a paper cut to as major as multiple deaths) are the result of human stupidity.

I completely agree on the whole legends thing, though. There are a lot of stories about the park I worked at, most of them passed down each year by employees (none of whom are over the age of 23) and some are fun, some are gruesome, and the accuracy of every one is questionable at best.

And there’s a small pile of detritus in the back of the park where all the old rides and parts of rides/buildings/stuff are dumped, because the park’s too cheap to have them hauled off or anything, and that helps with some of the stories.

Heh, as far as money not buying happiness, I like a slightly different version…

“Money can’t buy happiness, but it can make misery much more comfortable.” :)

Rule of acquisition 242 time like Latium is a highly limited commodity.

Sorry. 242 seemed like a really fun number to factor at the time.

“That’s the trade we have to make”

But what a poor trade that is. Count the extra hours spent and multiply it by your pay (or the pay of the person you’re employing). Subtract the cost of proper equipment. If the result is negative: Bad trade.

Just like driving twenty minutes to save 50 cents on gas. That’s a lousy 1,50 per hour of work, way below minimum wage.

Time is a currency too, and one of the most finite. Yet so many are giving it away so easily…

Oops. Should read “Subtract that from the cost…”

Yeah, that’s what happens when you rearrange a sentence without re-checking for grammar AND logic.

I think this would count as a combination of hobby and volunteer work. At the end of the day, you may end up taking away more than the cost of the time and pay.

Driving way out of your way to get a paltry amount of savings in gas, though. I don’t advocate that. The only exceptions: You’re making a fun trip of it, or you find a gas station that sells gas with no ether.

Well if a task is fun, then you might as well extend it. I wouldn’t mind driving around for no reason at all if the car, road, and weather make it enjoyable. I was specifically referring to tedious tasks that are more effort than fun.

In this particular case, proper equipment can help outline the rough shape in a few hours, and chipping away at it slowly is exhausting and boring, like cleaning the floor with a toothbrush. For the details you can take your time and enjoy being creative, but there’s really nothing interesting about clobbering rough chunks of stone off a block.

I work at a water park/skiresort and I can tell you that while most of the injuries are cause of stupidity, one ride has guest put on helmets cause a couple was messing around and not holding on right and the girl slammed her mouth down on her boyfriend’s head and got a tooth stuck in the back of his skull, there are times when pour design and maintenance are to blame. A waterslide with a full vertical loop, people got stuck, rubber matting comes loose and a lady gets lodged under it and the people behind her start to pileup against her till they realize no one’s coming out the bottom

Hey Mike, if the store Manager thing doesn’t work out…

Connecticut has a couple of permanent Amusement parks, Lake Compounce and Quassy. The former has had 5 or 6 deaths in the past 35 years, and the latter, 2. That’s plenty creepy for me. I took a girlfriend to Rocky Point Park in Rhode Island back in 1985; by 1995 they had closed their gates for good.

If you poke around on the internet, you can find sites dedicated to classic rides that have been removed. But the really dedicated ones will use 3D modelling to make virtual re-creations of their favorites. I remember seeing sites for “Adventure Thru Inner Space,” as well as the Florida version of “Mister Toad’s Wild Ride.”
But I think some of the funnest that I’ve personally experienced? Fans have made custom maps for the PC version of “Left 4 Dead 2” that re-create some of the rides in Disneyland. There’s one I’ve played ( http://www.gamemaps.com/details/2613 ) that is about 98% accurate of “Indiana Jones Adventure: Temple of the Forbidden Eye,” and then there is “Journey to Splash Mountain.” ( http://www.gamemaps.com/details/6084 ) You start at the main entrance plaza, hike up Main Street, through AdventureLand, New Orleans Square, and on to Critter Country, eventually calling for rescue at the Hungry Bear restaurant. And while it’s not quite as accurate to the real park (the bathrooms are in the right places, but their layouts are all wrong) it’s still freakin’ awesome. Because you’re tooling around the Mouse House during a zombie apocalypse.

Actually it was an employee that died. http://www.snopes.com/disney/parks/amersing.asp

That’s what I said.

Regarding money & happiness: Nope, you can’t buy happiness, but you can clamber past some serious *obstacles* to happiness by throwing money at them judiciously. For example, it’s difficult–possible, but difficult–to be happy if one is living on the bottom tier of Maslow’s Hierarchy, where there are serious anxieties concerning survival. People with money can obtain more secure shelter, more healthful food, a less toxic or dangerous environment, and higher-quality medical care than can people without money. And better education. And lots of other good things, which do, or can, contribute measurably to happiness. I would like all rich people who say “Money can’t buy happiness” to spend the next ten years living on $750 per month.