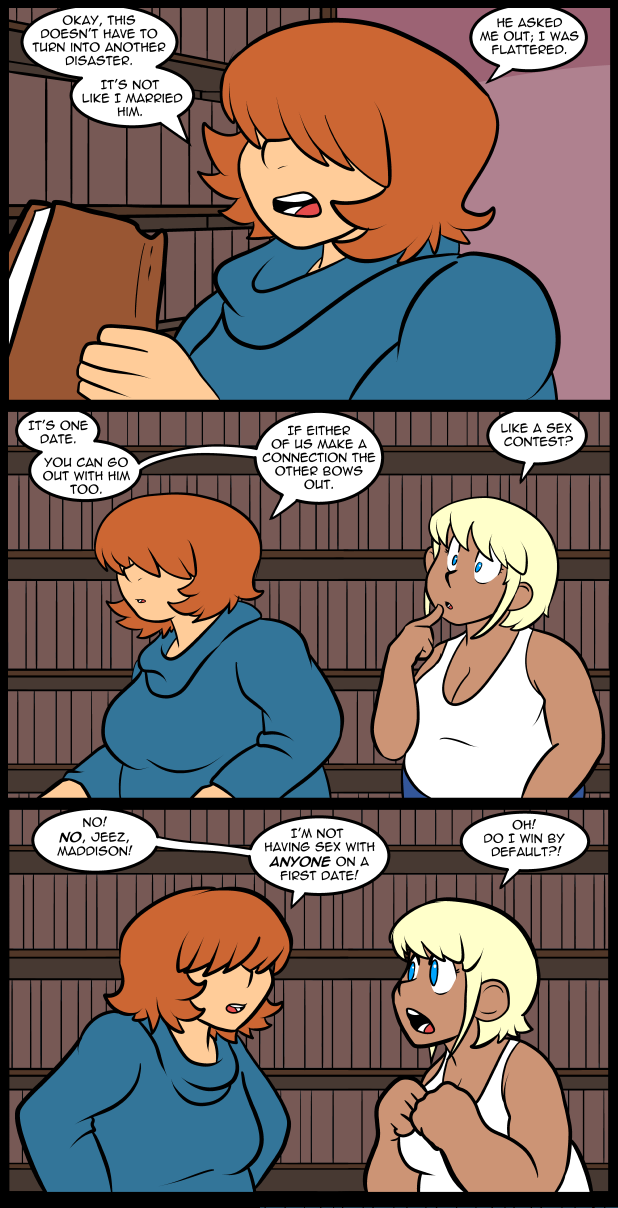 If there’s one thing I know about people is that there are many kinds of intelligence. For example, we have Alex, who has what is traditionally called intelligence, then we have Maddison, who would be considered dim by many, but is perfectly capable of functioning in the world and serving a purpose too. In fact, Maddison is more likely to procreate than Alex, so on an evolutionary level she’s more likely to win out over time. Intelligence, like many gifts, is not always the blessing it seems like. Sometimes it makes people not do things that seem like mistakes, but ultimately would be a benefit. Waiting too long to have children, for example. Waiting for the perfect time to start a business. Not dedicating oneself to art, which leads to a comic that could have been much better. It’s hard to know what choices end up being the good ones sometimes.

I’ve seen a lot of friends do things that were dumb as fuck, in my opinion, at one time, that eventually led to great success & happiness. A lot of things that I didn’t do, in the name of good judgement, have conspired to ruin, by some reconings, aspects of my life. Intelligence sometimes makes those people who have it arrogant to the point of thinking they can see the outcomes of all events. It gives you a confidence level that can be detrimental.

Of course sometimes stupid is just stupid too, but it’s not always as easy to parse out as we think.

Subject change
I’ve gotten some messages from people interested in getting me Xmas gifts. I’m very flattered, and if you’re hell bent on it here is the link to my amazon list:

It’s a completely insane list of things. Your safest bet is Lego, because it doesn’t matter if there are duplicates. Parts are parts. If you don’t want to do that you can email me for my shipping address, which some of you have already done. I can’t guarantee reciprocation anymore. I’m not fast enough to keep up with drawings as I used to be, but if you tell me your favorite character, or something, chances are my guilt will get you something at some future time.

Alternatively, you can pledge a dollar on patreon. A lot of people have fallen off of it in the last few months. I know it may seem like a dollar isn’t that much, but if 1000 people pledged it would add up. I think there are just shy of 400 supporters now and they have basically made it possible for me to keep making the comic, what with all the medical expenses. (The go fund me thing also helped a lot, but these bills never stop coming…)

I will eventually draw a sketch or an avatar image for any person who asks and successfully pledges on Patreon. I’m behind by at least a month, but I’m still chipping away at the list. Just be patient and I will get to you. After that you can request another sketch every month. It will get tacked to the end of the list and done in order received.

I send out a message every month that explains the whole deal. You can actually do the same thing directly through paypal, but they have really weird rules about stuff, so I’m hesitant to just use them. I do use them to donate a dollar a month to a podcast I like though. All I know is if you fuck up they take your money and freeze your account and stuff, which would be a massive disaster.

Also, if you ever just email me randomly, I reply to everything eventually. It can be several days later though, since everything that isn’t time sensitive is first come first serve. Also sometimes I accidentally delete messages on my phone, or think I’ve replied because I started writing a response in my head without actually writing it out. I know I have at least one message to reply to right now. I think Peg was the name. Don’t worry, it’s on my list.

I’ve got a doctor appointment tomorrow morning and possibly jury duty on Friday, I think. I have no idea how bad this week could go, but hopefully I’ll still be able to have pages ready for xmas week. I guess if I finally fail without actually being in the hospital my streak will be broken at a few months shy of ten years. Unless my memory is failing me March will be the tenth anniversary of the comic. I really hope I’m feeling well enough to do something special by then. Fingers crossed… at least when they aren’t being used.

Win by default? If I am dating two girls and one tries to get to know me while the other tries to sleep with me the first one will win a relationship.

Reggie would agree with you.

What if one tries to do both? That’s my preference really.

Maddy a freak tho.

Hold up, ANOTHER disaster? What happened before?!

She’s Maddie. She probably lives from disaster to disaster; life is what happens in between…

*puts on sunglasses*
… failures.
*cue The Who*

I foresee this turning into another disaster. Mostly for Reggie.

So Maddi’s philosophy is “You bone, you own”?

So, a girl version of peeing on it to claim ownership?

Pretty much but it makes pet ownership legally problematic in many jurisdictions.

It is a good thing this isn’t a manga, because this would surely devolve into a(nother?) disaster.

I like these characters, and the fact that they have life and depth to them. Don’t get me wrong, I love my shallow and goofy as much as the next guy, but I’m glad Jackie operates at a cut above that level of literature.

This will end with Reggie and Alex naked, in bed, and wondering if either got the license plate of that emotional Mack truck that bonked them.

If such does happen, especially so spontaneously, then they might well not take the time to get naked.

“This will end with Reggie + Alex naked…”

I have GOT to stop reading this site, when I’m too tired + have too vivid an imagination. :D

What shall Reggie wear?
I don’t know. But I suspect that Reggie likes to wear the Robotech [show’s] pilot’s costumes, or a Tuxedo Mask [TM] costume, for his bedroom scenes.

Geezum + wow! I had Maddie pegged wrongly, I see.

I thought she was of average, or better, in the smarts category… but with some big eccentricities in her mix. Oh well.

What you’re discussing in the comic commentary is all about Gardner’s Theory of Multiple Intelligences. No surprise here: it’s about how there’s more than one kind of smarts. There’s…

Soooo… which if these intelligences would you say fit the bill for Maddison?

And that’s basically the plot of Idiocracy and why we are doomed as a species.

Came here to say this, and also that “battle of the tits” turned out to be less exciting than it sounded :)

Maddison is, if anything, a little socially retarded, as opposed to mentally (or the PC phrase is, ‘Developmentally Challenged’). Her previous relationships, if any, were likely of the ‘Wham, bam, thank you Ma’am’ sort. We’ve already seen — in her first meeting Reggie — that she’s one of those touchy-feely, needy people. She’s quite possessive — clutching Reggie’s arm, “This is my pizza,” and her reaction here, when she finds that the current object of her affections is dating Alex. I’m smelling a deprived childhood, with either absent or distant parent(s). She craves any attention she can get, and interprets it as affection.

That said, Maddie has an easy road to happiness. All she needs is for some lonely, bookish nerd to wander into the Library, show a shy interest in her, and she’ll fall on him like a ton of… books.

Nicely put. I really like your interpretation of Maddie.

It suddenly occurs to me that if Maddison comes on too strong, and depending on where this occurs, Reggie might react in a way that could lose his chances with Alex…

I mean it seems he’s pretty good at keeping himself polite and such with people he doesn’t know, but if the two of them are good friends and Reggie decides to indulge in some of his harsher statements things could go downhill pretty fast.