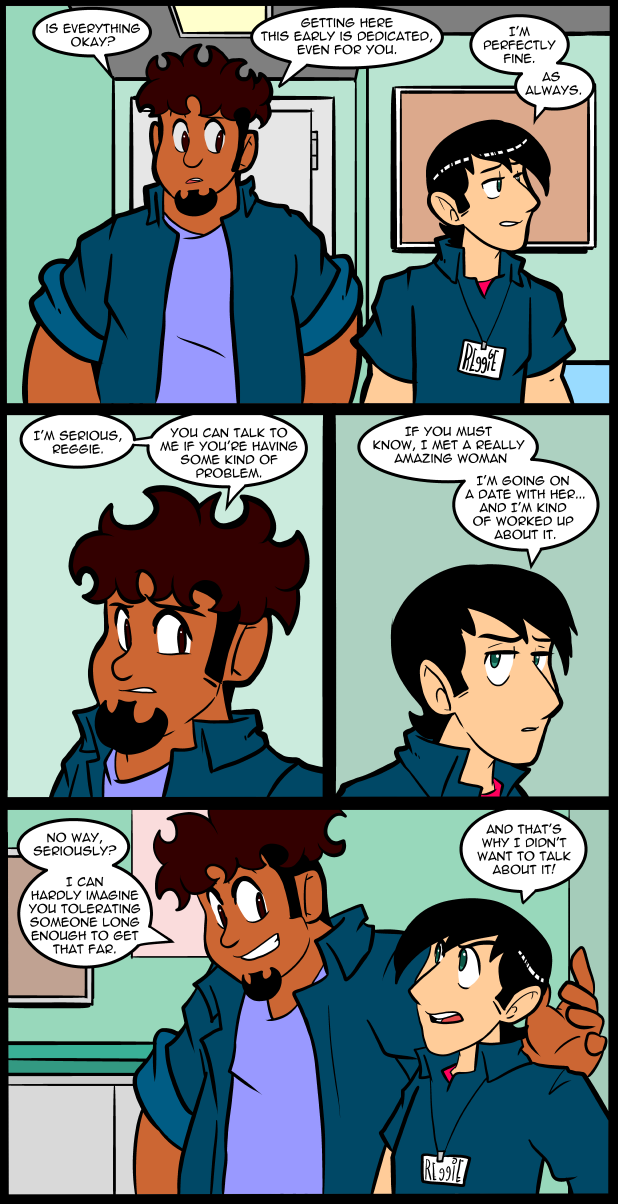 Way to teambuild, Mike. Your award will be arriving shortly.

Yesterday my back was hurting a lot. To the point I was starting to think something was seriously wrong with me. I had decided to try using an icy hot patch on it after just icing it with regular ice, and that seemed to make things way worse than usual. Once the patch came off I started to feel a bit better, but I don’t know if it was a coincidence or not.

It might have been that I was just a bit sick with some sort of flu, or something. Not a very strong one, but enough to make me really feel slammed. I also think that I’m still not gettingbthe right kind of sleep with my mask on. Of course now I can’t go to bed without immediately choking if I don’t turn it on, so I have to adapt at this point. The reason I think I’m not sleeping properly is that I’m having little moments of almost falling asleep suddenly then waking up suddenly during the day. Almost like narcolepsy inching its called. Its very stressful when it happens, but usually if I try to sleep after I just nd up laying there awake. It’s weird and I don’t like it.

Man, Reggie’s face on the first panel is just perfect. Could not stop thinking “Hey, asshole Reggie is back!”

Reggie is like an onion. As you peel away the layers, you just get more onion.

I am not sure why, but your comment brought visions of pain

Thomas would have at least waited until he found out the girl’s name before teasing Reggie.

Mike’s just trying to be friends. A little gentle ribbing hoes a long way in friendships. And comdoms.

I can pretend that was intentional what with me sometimes calling them “commiedoms” Ala “femmidoms”…. but it was just an unfortunate typo…

You know, both my wife and I recently had a cold and also suffered from a bout of strangely strong lower back pain around the same time. Kinda spooky, actually…

My mother and I got the flu once and had similar symptoms. The last time imwent to the hospital I git sick in kind of a similar way, but this time I’m less sick and more tired from having been sick.

Not a doctor, but the “common cold” (which is not influenza type) does hit various mucous membranes in the body depending on the flavour-du-jour. This could include the kidneys giving mild inflammation, with commonly lower back pains involved.
Or as my old mum, a die-hard nurse, used to say: “Congratulations, you now know what it is to have a uterus go off on you…” (lovely woman… razor. sharp. humor…. ;) )

As for the “falling asleep” thing.. Sounds like your body clock is a mess. Which given the chronic problems you’ve had sleeping for how long now isn’t that much of a surprise.
It’s actually a Thing when working shifts for people with strong biorythms: However well rested you are, in the Bad Shift ** your brain tells you it’s bloody well “midnight” and it wants to sleep, regardless of how well-rested you may be. This causes moments of “zoning out” where your brain actually tries to fall asleep.
What you’re experiencing could well be that you *are* finally getting some decent sleep in, so that the “minor stuff” that’s been off-whack because of your prolongued period of …well.. extreme exhaustion finally get the chance to right themselves.

** for the majority of people the Bad Shift would be the nightshift. For true Night-owls this would be the *day* shift.

Sir, your explanation has enlightened me on an unbearably perplexing topic. Namely how I can be tired when I’ve clearly rested for 6-8 hours on a comfy bed (after a shower).

Very well put and explained. I’ve noticed this myself and this explains a lot.

To be fair, at least Mike didn’t say he could hardly imagine SOMEONE ELSE tolerating REGGIE that long – a far more painful and obnoxiously-stated truth.

Mike may be awkward, but he’s usually tactful.

It’s early and Reggie already got blackmail on him.

If your CPAP has a “ramp” setting, that might help you. A ramp function slowly raises the air pressure so it doesn’t hit you all at once.

Some people benefit from this, at least until they get used to using their device.

About the icy-hot pack, I have some pretty major shoulder pain (have had it for about a year now), and when it first started, I used a lot of those patches that stick to you. They work really well, but if I leave them on, the skin gets… spongy? And very very sensitive. Worse, if I forget to take them off (which I did occasionally by falling asleep), I’d wake up and feel pretty dizzy/woozy.

Whatever happens to be in those patches, I think that it may be fairly common for people to react to them weirdly (especially if you leave them on for a while).

With your recent issues stacked up on top of that, it’s not a huge surprise that you would react to them.

TL;DR, you maybe aren’t imagining things with the patch.

Come on Reggie be sociable

So….. For those who haven’t heard, Yang Xiao Long from RWBY will be facing off against Tifa Lockheart from Final Fantasy VII in the next Death Battle. Oh, and ScrewAttack got Barbara Dunkelman to voice Yang for the match.

Had a strange dream last night that you suddenly posted a huge chunk of comics involving Reggie’s date. I believe he was assassinated by her black haired father(?) who might also have been a vampire.

Thinking of that: recently I had seen “possibly true ghost stories” on the History Channel, then I saw the music video for David Bowie’s “Fashion” song.

…That night I had dream about monsters, where a blonde David Bowie showed up, head-to-toe in a mummy costume.
He then told me to get out the house because he didn’t like my bad clothes, or something.
[ Those Dumb Halloween shows]. :)

And Reggie finally finds someone! <3 :D I so want to see how it goes. And Mike's a true master at team building. I love how you draw Reggie's expressions, his face says everything his mouth says, and more! (dunno if that's a good thing for Reggie, as he has a penchant for running his mouth and if his eyes are even more expressive.. well, yeah. it's just cute!)

As a few readers pointed out, there can be many reasons for lower back pain and "zoning out" and being tired even after a good sleep. Most probable on the sleeping side are the biorhythm issues, I have had them myself, zoning of and constantly feeling like I should sleep after good 8 to 9 hours of sleep behind me. This seemed to be brought on by my really erratic sleeping style and waking up from nightmares every single night. The worst thing was that it escalated to a whole another level when I added work outs and coffee, but that I know is different than what you are suffering from. It takes time for your metabolism and biorhythm to fix themselves after having an underlying sleeping disorder. What I would do if I were you would be calling your doctor and explaining the symptoms as accurate as possible and just ask if it's possible that it's just from biorhythm getting back on track or if it could be something else entirely. These are, after all, very important things to address, just to get your normal life back.

If your lower back hurts, it might be that the flu you have caught is still in your system, mainly, there's a chance your kidneys are slightly inflamed. I agree with the reader's mom who said that this feels like an uterus acting out, which is for some women (like me) painful beyond words and can lead to vomiting. But yeah, you aren't a woman so that's ruled out, but kidneys are the word of the day on this one. If the pain does continue or becomes any worse, you should go to the nearest ER and have your blood work looked at. My guess is mild inflammation brought on by flu and stress and it'll be fine, but keep an eye on these things and your mind off of them. By that I mean, don't stress out or obsess about it, but if you notice anything changing drastically for a worse, then trip to the ER would be in order just to be sure.

I myself was sure last week that my appendix would burst, but it paid off to wait, never figured out what the pain was but most importantly it went away after 24 hours. My mom, who is a specialized nurse, used always say that if something's truly painful, it'll wake you up at night. Of course some people have higher pain tolerance or aren't easily disturbed sleeping, so that isn't necessary true for everyone, it's just a little guideline for if you notice that happening.

I’ll see if I can get her to post soon.

I missed Reggie, don’t get me wrong I like everyone but they don’t blow up things as much as Reggie