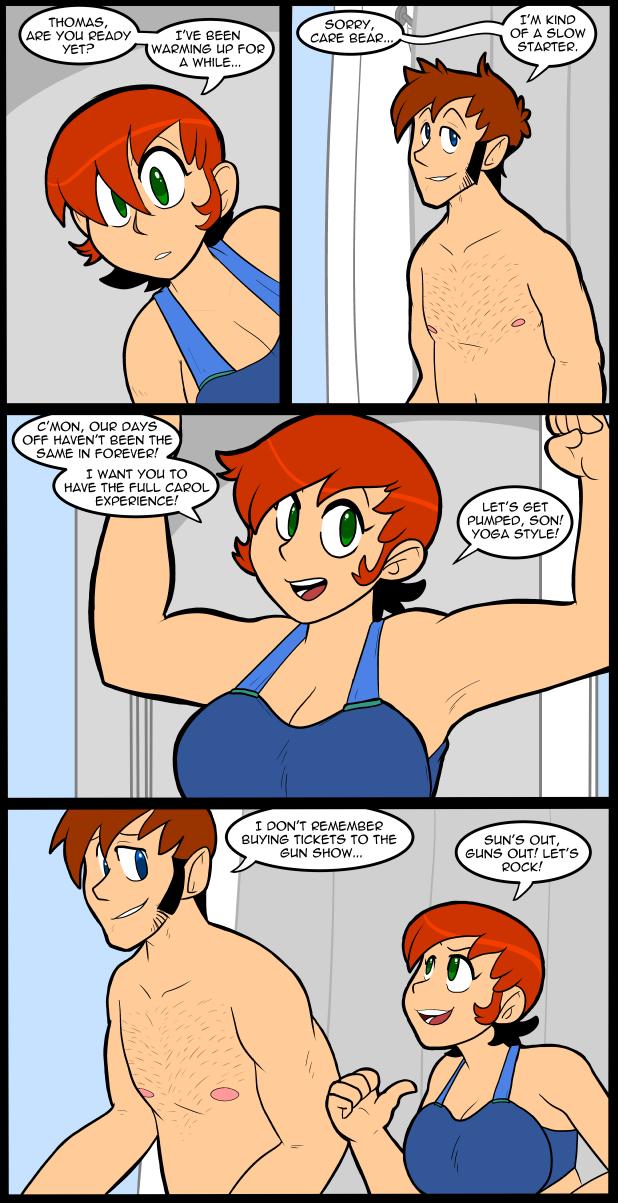 Fun fact, Carol’s sports bra is modeled after one I found online while looking for one that would realistically contain a bust as large as hers. Rather than just guess at one would look like I did the reading and found this armor plated looking thing. I think it looks pretty rough and it suits her. That said, the real version had a more complex connection to the cups that I was not willing to replicate in a drawing over and over after trying to draw it once. So I made it look like a regular strap. Thomas’s chest hair is enough of a pain to do panel upon panel.

A storm came through here earlier and just wrecked shit. I needed to take the teen to therapy but we didn’t get out of the house fast enough and got caught in it. It started hailing a little as we got a ways from the house, but it didn’t seem to be getting worse so we kept going. Then it suddenly got worse. Golf ball sized hail worse in a very short period of time. I kept thinking if we could get a little bit away we’d be ahead of it, but couldn’t drive fast enough to do it. I had to pull into someone’s driveway and wait it out. My windshield got cracked in the passenger side corner. I’m hoping that maybe my insurance will replace it.

On the plus side the Ultra Magnus I preorderd months ago came today. I had the original UM as a kid so I really wanted the Combiner Wars version. It’s very much like the way I imagined he should be as a kid. He even has shoulder missiles that you can take off and they are the same peg size as original Magnus. So I put on his real missiles. Pretty much makes him look perfect as you could hope for.
I have all the parts from original Magnus, but his gun doesn’t go in his new hands very well. So I let Strongarm have it. Because she is in love with him and wants to have robabies with him. (That may be in my mind alone…)

They are making new versions of a lot of Transformers that I had as a kid. The difference being that this time the new sculpts look like the way the old toys looked in your kid memory. I’ve been trying to get them as they come out. I had a very small and random selection of G1 guys. I can probably still list them all. Optimus Prime, Cosmos, Huffer, Overdrive, Jazz, Slingshot, Brawn, Bumblebee, Cliffjumper, Gears, Outback, Powerglide, Seaspray, Wheelie, Blurr, Ultra Magnus, Hoist, Hound, Chromedome, Grimlock, Sludge Slagg, Streetwise, Blades, Freeway, And Starscream. Yes, Starscream. The most dangerous decepticon in my mind because he single handedly had take on incredible odds and fuck with the autobots all by himself. I actually got Astrotrain at about the same time I got Magnus and the other movie era autobots, so Starscream Finally got someone to boss around.
I have almost all of the old team in new toy form. The Dinobots have never been satisfactorily remade, except for Grimlock who everyone loves. Overdrive is an Alternator that wasn’t released with his proper gun in Amreica. (I do have him though.) Gears and Outback are 3rd party because they refuse to make a decent Gears. Anyway, I’ll tel you guys more about it later. Part of the reason I write such believable characters probably has a lot to do with having mostly good guys as toys so a lot of the conflict had to be interpersonal, or something like that.

aaaaaaaaand the similarities keep stacking up. Still, this is officially my favorite pairing to keep track of now XD Also I didn’t know sports bras come in that size. There have been some pretty rough storms lately, stay safe

On the Internet you can find anything if you look hard enough. That little number goes for $80. Which is fucking insane.

See, this is one of the several reasons I’m of the male gender. Girls have it rough on so many levels.

Looks about right. As a gal with one of the aforementioned ‘larger busts’, you don’t want to know what I pay for for perfectly ordinary bras. Sports bras … heh, I’ve just resigned myself to excessive jiggle and try not to put myself into positions where I have to run.

And now I’m on meds which have effectively made me go up two cup sizes, so I get to decide if I want to cope with going braless and sloppy or pay a lot of money for what might (or might not) be a temporary shift, yay! I feel Carol’s pain.

The r/abrathatfits sub on reddit is a great resource. Those ladies know where to find the best bras.

Seconded. Every person with at least one breast, or an appreciation, or interest in them, should visit that subreddit at least once. So…basically everyone.

Most big jug girls I know wear two sports bras at the same time… Or a standard wired bra with a sports bra. I’ve been blessed with C-D size that look bigger on my larger frame (size 16-18). Plus size hour glass- cruel joke for the heroin-Chique 90’s ..

I’m actually super glad you took the time to look up a real sports bra for Carol. 2 doesn’t work, the less armored ones are almost as bad as nothing…I’m a soccer keeper on a co-ed team. It is so nice to be locked and loaded AND have no bruises when I get hit in the chest.
The $$ is no joke. I don’t think I’ve been able to spend less than $80 on a bra in 10 years. Trust me, the whole 4 to 6 ‘boobs’ and back pain from ill-fitting ones makes it a key investment. I didn’t even know the ‘bra alphabet’ went up that high until I went in for a real fitting. Sweet relief

Not really a comment on the strip, but just a suggestion for the next time you put some artwork up on Ebay. If Walky is okay with it, why not do the BF version of Amazi-Girl? It was the pic that got me to reading about Thomas, Carol and the group.

Not only do I think it’d do really well, the folks who look at it might not be current readers of either strip and find it interesting. It could bring in a lot of new followers for you both.

Hope the idea has some merit!

Carol has reggie face in the last panel.

It’s the new dreamworks face, I can see the money rolling in.

She can’t take credit for that. I heard some meathead say it outside one day and thought it was funny.

I’m pretty sure that was a recurring line in the Johnny Bravo cartoon. Or something a character very similar to him said regularly at least, as that’s who I associate with “Sun’s out, guns out”.

I’m pretty sure James Vega in Mass Effect 3 has a similar line too, though I tended to not pay too much attention to him, being all distracted by Tali at the time :P

Maybe it’s just me but her bra looks like Sayain battle armor.

That’s basically what it’s for…

“are made of an unknown material, which is said to be stretchy, yet very durable. Even Saiyans in their Great Ape form are able to wear their armor without having any size issues.”

“he [Vegeta] once remarked ‘one size fits all'”

From Dylan: “her bra looks like Sayain battle armor.”

IF only that were true! (Women of the world’s bra shopping nightmare would be over due to Dragon Ball alien tech. TT )

Better the guns than the cannons.

Thomas and his sexy nipples…

Trust me, he ain’t looking at her guns, even after all this time (well, subjectively for us) together.

One of my former girlfriends used to call it an, “Over the shoulder boulder holder.” In Carol’s case it’s more of a “Boob-Overload Containment System.” (* sigh *)

Hmm. A low, temporary defense construction (like Fort Mudge) is called a breastwork. Works for me!

Just caught your twitter feed on the right side of your page. I am trying to cut mangina drama out of my life and you are using ALL the right words. Just thought you would like to know why you lost a fan today.

I didn’t lose a fan. I excised someone cancerous.

And I just upped my Patreon support because your characters are great and your posts are real and human and yet you still slog through internet horrible-town to bring us something amazing. Much appreciated.

If someone sees something in Jackie’s twitterfeed they don’t like, can’t they just… not follow/look at it? I never understood this unwritten rule of society that says if you don’t care for someone’s opinion/attitude/whatever, that you can’t enjoy the work they produce?

It’s like MJ or Bill Cosby all over again. Just because they did horrible things doesn’t automatically make everything they ever did, which people enjoyed before those issues came to light, complete shit, y’know?

Am I in the wrong here? Please tell me if so.

It’s difficult for some to separate the work and the artist, particularly if the work caused you too look up to the artist. But this isn’t as extreme as Cosby or MJ. This is literally someone who has stopped reading something they enjoy, because of disagreeing with something the author said outside the comic. He didn’t even say anything bad. At all.

So in short, some people are going to be uncomfortable with extreme cases like Michael Jackson and if they say anything about it, fair enough (too most people, anyway). And then there are going to be people like this guy, who won’t be able to be in the same room as someone with a remotely different opinion on internet comments.

I love your tweets. I always feel this desire to reply to them but then that would basically be the ONLY reason I would have such an account.

Too bad I can’t just reply to them here. (positively though, not like the weirdo above.)

This is going to be like that scene in Grand Theft Auto V when Michael tried yoga with his wife and yoga instructor. I can’t see it ending well for Carol.

Hooray for Carol and Thomas! I’ve missed these two.

I am glad you explained the bra thing. When I first saw the page, I thought she was wearing some kind of battle armour, and was wondering if they were going to some renne fair event. That thing looks like it would stop large caliber bullets.

Good morning to me! You always make me happy when you draw Thomas like that…

Seriously, I think I’m sick : I’m checking your website every day, I re-read the comic twice already and It’s only been one week since I’ve discovered Between Failures.

I’ll let you know the truth : I think you’ve got a pretty crazy italian fan from across the ocean in the person of myself. And that crazy person is spreading her crazyness about you in her group of friends.

Im glad to know I’m reaching a variety of people. I guess having odd friends and a boring jobs is universal. XD nice to have you on board.

you aren’t the only one lol

Gun show eh? So will there be any “pump action” going on?

With Thomas’ chest hair being a pain to draw, I see tank top in his near future.

This is random, but I’m the guy who bought your copy of Super Star Wars V, and I wanted to thank you for the awesome sketch. I plan on framing it when I have the money.

Glad you liked it. I hope the game helps complete a collection too.