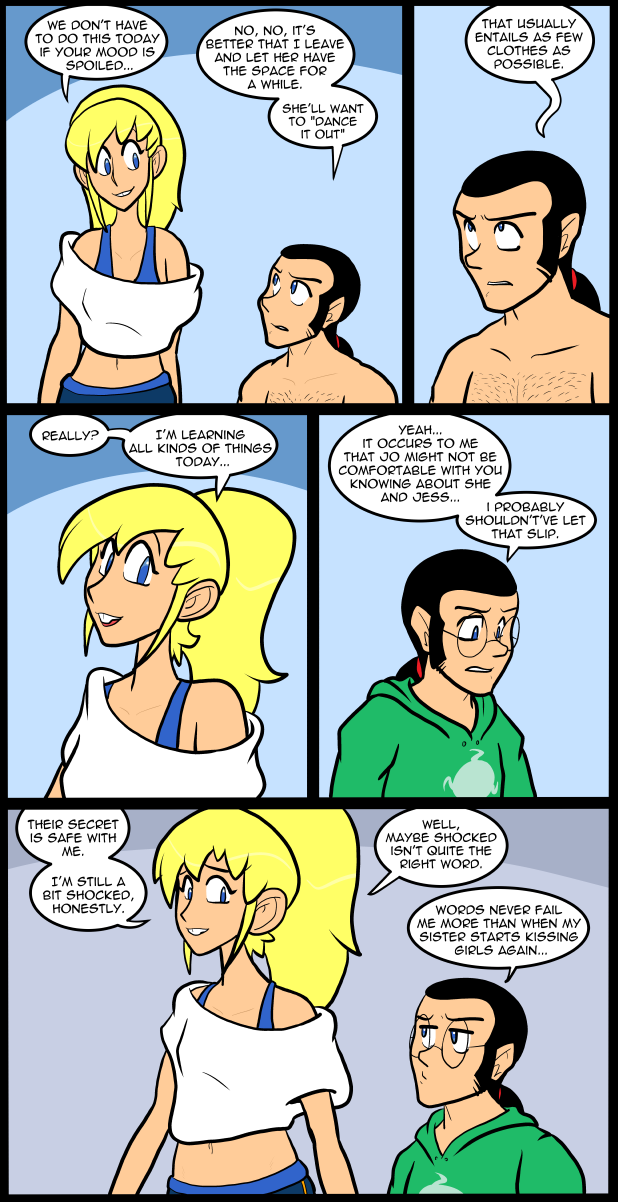 I ended up at the store this evening. I was only going to get detergent. When I left I had a cart full of random crap the kid insisted she and Rainbow Dash needed, to the tune of $70. How do people have children? Their an incredible drain on resources…

The Teen insisted that we buy a bra to replace Rainbow Dash’s one, which apparently there is only one of, and is falling apart. So I got to bra shop for quite some time. Which I why this post is going up with such a small post underneath. No one can say that when breasts need support I wasn’t there to help.

Everything after this sentence was added after the initial post.

Ed is the next up for auction. link

The other arts did well, even Reggie brought a normal amount of money, which makes me happy because people like him in spite of, or possibly because of, his flaws.

By the way, if you win anything of mine that’s just a regular item, if you tell me your favorite character from the comic in a note on ebay when you win, I’ll draw a little drawing of them and stick it in the box too.

They think “Lol, I peaked my life, lets ruin whats left and leave happiness to the next generation” -so says me, with my 9 year old thats a little clone of me that gives me great joy and frustration at the same time :P

You know your too short when there’s no way of know you’re wearing pants or not in the picture. Poor Ed.

The struggle is real.

As are the rewards!

To him that overcomes…THE ROLLERCOASTER OF AWESOME!

YOU MUST BE THIS TALL TO RIDE THIS ATTRACTION

Already been confirmed! He’s worn that sweatshirt before.

huh, i thought it was related to soul eater *shrug* kinda looked like a soul aura.

It is the symbol of the ‘hero’ of Mind, which is the closest that Homestuck comes to soul.

Actually the Aspect of Heart is comparable to soul. The Aspect of Mind can be quite litteral

Suddenly my mind wants me to believe that Ed and his sister have something to do with Ranma 1/2 and that the symbol on Eds shirt is an egg being teamed by multiple sperm… clearly I stayed up too late waiting to see this.

His sweatshirt is a reference to the Knight of Mind! It’s a homestuck thing.

I can’t be the only one who thinks it’s funny that you’re the one bringing anime and sperm to the table, but when Homestuck is mentioned you back away.

I think it was something about the exclamation and its placing.

I keep reading up on this Homestuck when its mentioned but the info is forgettable and I have to read up on it all over again the next time its referenced. But I don’t really care about it either way.

At least I amused that one person. Its been hard getting an internet laugh of late so that’s a plus.

She kissed a girl and she liked it.

I like Jess, she’s a lot like me in her sexuality–if it tastes good, I’ll eat it. But I get the sense that her brother is less than thrilled about that…hehe maybe he’s jealous that she gets more girls than he does. Though he could get plenty of action if he wanted to. boy is hot! I hope Brooksie knows that Jess sees this as a casual fling and not a girlfriend/girlfriend thing.

I just want to point out again that Jo is the one gunning for Jess, Nina and a non-scary carol. She has her fingers in all the pies, I’m still thinking Jo might be the breaker not the breakee

Everyone knows Brooksie is going for the Harem ending!

I never said that Jess was the one who initiated it. I just like that I can relate to her. Just because Jess isn’t trying to get into everyone’s pants doesn’t mean that the sexuality I stated above isn’t any less true. Plenty of people on the zero end or the 6 end of the kinsey scale jump anyone’s bones.(which isn’t a bad thing) I don’t do that, but I still stand by what I said. I think that Jess will be the one to back out. The relationship isn’t balanced–Jo likes her way more than Jess likes Jo, or at least, that’s what I think. Although, there might have been an off screen discussion about their relationship, where they both decided that this would be more of a friends with benefits type thing.

Or, they haven’t talked it over yet and she doesn’t want to speak for Jo. It might be she does have a stronger connection so she doesn’t want to overstep with her. Still haven’t pegged it yet, but I’m hopeful they DO start dating and then more later.

“…her fingers in all of the pies.”

OOH! Sometimes I could curse my occasionally-filthy imagination!

I think he doesn’t care, as long as its not HIS girl she ends up with.

Well, no permanent damage. I guess Nina already knew Ed was a grumpy little scut. I can see his point; Jess does seem to accumulate an entourage wherever she goes, whatever she does. That said, he should be used to it by now!

Reading the blog, I had a mental picture of you buying a bra for a cartoon horse, and tried to process how that would work. I think I broke something.

So apparently she is a centaur now?

What I know about MLP comes form osmosis (since its everywhere on the web… ) but I think they got turned into human females sort of once called Equestria Girls?? Anyway, maybe those episodes have made the furry fanbase see them as were’s and this is an inbetween form.

That’s not where the teats are on a horse.

Seems to be quite embarrassed by his sister

Gah now i know who she reminds me of!

Oh Gadget how could I forget you…

Now if we can get Nina to get Jo + Jess to dress up like a sexy Chip and Dale, ( C + D, the Rescue Rangers), then the three girls can take the story into a whole new direction!

Ed is really really good at getting dressed in a hurry.

Ed has those high tech-kind of clothes + glasses, that climb on you and dress you, so that you don’t have to dress yourself. What will they think of next?

Please tell me Rainbow Dash is in reference to a specific person to whom you have given that nickname.

I am having difficulty imagining that you had purchased undergarments for a small plastic pony at the teens request.

I also am wondering this. Unless it is just normal human undergarments with MLP pictures on them?

I had no idea that cartoon ponies wore bras. Google turns up some cute Rainbow Dash themed underwear and clothing for girls, but no pony bras.

What a coincidence Crave…
I was just bra shopping with Herself!

I grant You, though;
My evening was much, much more enjoyable than Yours.