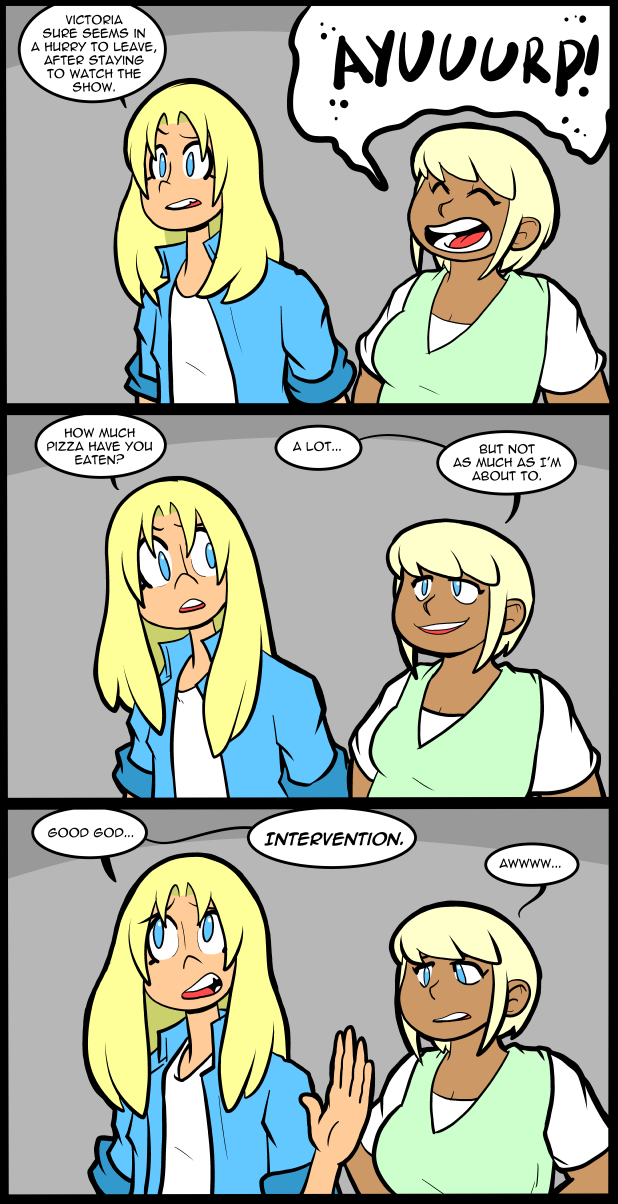 Generally speaking, I find blond people less attractive than people with other hair colors. This goes for men as well as women. I tend to be mistrustful of light haired people because, in my experience, they are full of deceit. This, of course, is a logical fallacy. In spite of knowing this I still tend to be cautious when dealing with fair haired people. It’s likely also why the starting cast was tipped far in favor of dark hair. It’s also likely why Wes is blond. I had a nemesis in grade school who was about as Aryan as it gets.
Having said all of that, my first crush was on a blond girl. Although she bleached it to be far lighter than it would have been naturally. Bridgette is reminiscent of that girl, design wise, more than Nina. Although they share certain genesis points.

I don’t know the fates of many friends I had from those years. Since I was just ahead of the social media change when our paths diverged they mostly stayed diverged. A couple have wandered back in from time to time, but I’m not one to spend a lot of time reliving old stories over a chat. Also, I don’t remember those years very clearly anymore. Not because I couldn’t have. I chose to forget. Sometimes it makes me worried because I wouldn’t be able to tell the difference between choosing to forget and not being able to remember. If someone reminds me though all of that stuff floods back in and it’s easy to tell that I was keeping the gate closed by choice. The friends I still have are more the custodians of my memories than I am. Sometimes when I can’t exactly recall some story I wanted to corrupt for the comic I have to contact one of them to fill in the stuff I’ve blocked out.

I used to be able to eat two or so large pizzas(depending on the flavour) when I was younger, but these days one 9 inch pizza is enough for me.

Ah, those days as a teenage male, when I was a bottomless pit when it came to food. With a brother a year younger, I look back and wonder how my parents could afford it.

Truly, those days were glorious. Eating full family sized deep pan pizzas in a single sitting… Now I can barely manage one large.

Ah, I too remember those days of yore. When I was doing the Have Gun, Will Travel schtick, we would frequently have Pizza Runs on weekends. When the Captain worked Saturday or Sunday, it would be a major event. He was a big boy, a lot taller and heftier than I, even then. Suffice it to say, my girlfriend and I had to pull a swivel office chair off his butt one night.

One evening, the Captain, the Sergeant and I all ordered Large pizzas from the local pizzeria. They were 18-inch monstrosities with three toppings each. The Sergeant got through six of eight slices. I barely ate all of mine, and the Captain ate all of his, the Sergeant’s orphaned slices, and whatever leftovers the rest of the crew had abandoned. Then he went to the vending area and bought two hot dogs. A true trencherman!

In highschool we sometimes went to Pizza Hut for the all-you-can-eat lunch and I held the record for the most slices of pizza: 24! (included a couple dessert slices). Why did we compete? And why am I proud of that? Didn’t gain a pound back then ;)

Love that text styling of Maddie’s belch. Not only could I hear exactly how it sounded, I could almost smell it!

An intervention only works if the entire group shows a united front.

Those fingers in the last panel though…

Yea, I was wondering if anyone else saw that.

There is some level of logic to that as the most common fake hair color is blond as it’s the easiest to attain.

@Jackie
so is it natural blonds that you dislike more or the ones that dye their hair?

Doesn’t matter but if I can tell they dye the hair I assume they are dark haired with a desperate need for acceptance.

As a guy who’s dyed his hair almost every color of the rainbow, I can tell you blonde is probably the most difficult color for a dark haired person to obtain. When I’m going to color my hair, I bleach it to a sort of a ginger color, and dye over that. To get it to a true blonde, I’d have to use a far more intense bleach for far longer, and although I take pains to repair my hair afterwards, it would be the end of my hair maintain blonde, eventually it would all break. Even bleaching that hard, I’d probably have to get a blue toned conditioner or something to neutralize the residual orange in my hair.

Does that mean that Wes is some kinda As-el?

*Gives a small shrug*. Some had to say it, at least once.

Some people kind of mistrust blonde people?
That’s interesting. I think, in medieval Europe- blonde hair in paintings was a symbol of honesty + loyalty. Hm.

The Lannisters send their regards.

Sansa: “I want to stay with Joffrey and have his beautiful blond babies”
Arya: “Seven Hells!”

i have an inherent distrust of blond males at least. Which is stupid because i can think of at least 3 ok ones off the top of my head.

Oh and also, your selective memory reminds me of the Scott Pilgrim series. The movie was ok but have you ever read the Books?

I have read the books.

prepare to have your mind blown. i am a blond male. do you trust me on that? :D

Pics or it didn’t happen.

What are you planning in that suit, blondie… I’m on to your schemes now…

hahahahahaha! i dunno, dude. Jackie seems to think i am Loki =|

When I see that burp all I can think is how did she not throw up?

Do you not encounter a lot of burping?

I still have the same apatite as when I was 10, little to say I need a mountain of food.

Oh, I’m in my mid-thirties and I can still put the food away like a ravenous starved beast.

Working at UPS has really helped with the weight, though. Also, being married without lots of money for now helps me not eat like a bear finished with hibernation.

I can tell you this much, though. It has probably been a decade since I’ve weighed 206 lbs, which is where I’m at now.

I suppose it helps that I’ve recently befriended an Air Force Major who was an active physical trainer that currently enjoys my company as a running buddy.

And after she cleared that room for more

I’m closer in age to my nephews than my siblings, and they will often ask me if I remember something we did years ago. “No, but it sounds like it must have been fun!” Other times I’ll go to relate a story that one of my other nephews was in, and they’ll say, “Man, I was there!” It’s no wonder I nearly fell out of the pickup on the boulevard, since at last count, there must have been about 14 of us in there.

Former blonde here. At one point it was as blonde to the point of almost white (before we met, capital J), but these days I’m darker haired. Well, darker with some Reed Richards silver striping goin’ on.

Well, food is a substance; I guess it can be abused.

Maddy:Hey , John. Thanks for bringing the pizza.Brawwrrpp!
Bridgette: Really, Maddy?
Maddy: What? It’s a compliment…

Now that I think of it, the two ex-girlfriends who screwed me over the most were both blondes…

Somebody didn’t take away the correct message from the blog post.

No! No intervention! Fill her with more pizzas~!

For most of my life, I could hardly be comfortable around cleanshaven men.