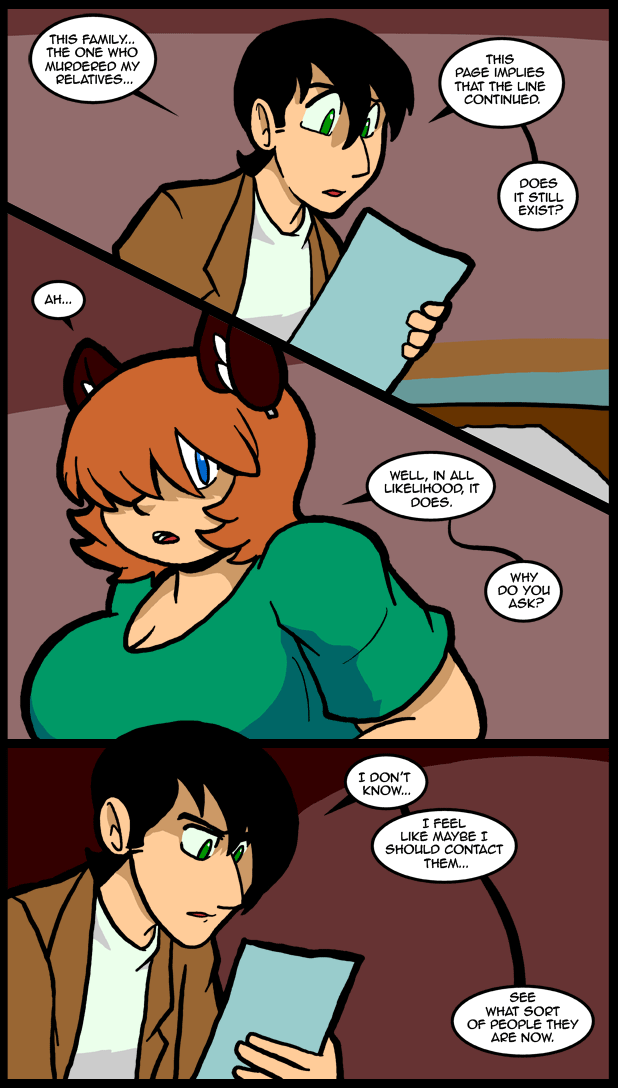 Health update: I’m getting better, but it hurts to sit down for very long, so I have had to find many new and strange ways to do my pages. Honestly, if you could just use the drawscreen without sometimes needing the keyboard and mouse it would be so much simpler. It’s a shame that art hardware doesn’t seem to be designed by artists. Or rather if it is then they aren’t very good at knowing what would be the most useful ways for things to be. Anyway, whatever. It is what it is and I’m not in a position to make changes to that sort of thing just now, so I’ll just have to deal with reality as it is.

The Teen’s playstation login is connected to an email account that likely doesn’t exist, or can’t be accessed. Whenever the account was set up her birthday wasn’t used, so you can’t even start many account functions. Because of this there is no way to update her password, or transfer purchases from the eshop. This also means that if she ever gets logged out of her PS3 in such a way that it deletes her saved password she will not be able to get back in to anything. Her whole family is barely computer literate and the idea of writing down password information apparently didn’t seem very important at any time. I have elected myself to solving this problem before it becomes a problem. Knowing how these things work though I don’t have much hope going in to it. It is almost impossible to produce enough information to prove who you are to a customer service rep, especially over the phone. This was a big problem when my uncle died. People kept saying he needed to do this or that to prove he was who he was and mom kept having to explain exactly how dead he was. Let that be a lesson to all of you. Even if you don’t want your family to have access to your accounts now you should place the account information in a place where someone will know where it is. I have a notebook that lists all the passwords I use, account names, ect. that I keep in my area. People know it exists. People I trust not to fuck with it unless it is the last resort.

The password book thing reminds me of that part in The Last Crusade where Henry Sr. tells Indy that the reason he had the journal is so that he wouldn’t have to remember what was in it. At this point all we have is the vague memory of an account being set up, possibly several xmases ago, and apparently a video of me telling someone “Do not lose this piece of paper, it has her password on it.” FUUUUUUUUCK.

Honestly it wouldn’t matter except that I’ve spent so much money on content for the Teen, which is now bound to her account. For some insane reason I just assumed that she would know her account information. This account info problem doesn’t stop with her PS3 either. Pretty much all of her online junk is tethered to this inaccessible email address, or created with false information, chosen at random so she could have a facebook when she was too young to have one.

Anyway, she went to Denver with some friends, so she won’t be posting tonight. Maybe Wednesday.

I predict it’s going to be someone from the store.

Brooksie. We don’t know her last name do we? :)

I sense a batman moment coming on…

It’s Brooks. That’s why they call her Brooksie.

i was just about to say that this feel Batman-like

But is it someone we already know?

He looks surprised and then upset. Maybe it’s NOT Blackwell. Dang gotta wait til Wednesday I’d be surprised if it’s someone we DON’T know in the comic.

I’d be surprised if he found the last clue before spring.

I’m betting on the family being either Lincoln, Asel, or Grace.

Of course it could be Neil, Bridget, or Madison’s family just to throw us all off.

Or one of the shoplifters.

I hope it doesn’t turn out to be Brooksie’s ancestors as the murderers. The poor girl wouldn’t know what to do.

If I recall correctly, at least one side of her family recently immigrated to the USA.

I don’t plan on dying anytime soon, but at some point I’ll give it to family members, “just in case”.

Which protects them fully from Gremlins, crashes and hacks.

But then hard copies are subject to fire, floods and other natural disasters, so whaddya gonna do?

Which is also susceptible to said disasters. And a few more.

what if it’s one of the shoplifters?

Ed and Jess’s father is the most feared high school principal in the state. Jess is a brat that gives off more than a bit of a cut-throat vibe (at least to me), and Ed has a history of violence. Not sure any of those really qualify as ‘nice’ people. While Reggie is irritating and obnoxious, that’s pretty much the extent of it. Ed and Jess are certainly more likeable, but not sure if I’d say they’re better people…

As for who’s family it is, Carol isn’t from the area, so that’s unlikely. John and Brooksie are unknown (as far as I remember), which makes them unlikely, especially since Madison probably would have mentioned it to Brooksie, since she knows both of them. Ed and Jess are from 1 town over, so their family is a possibility. Thomas and Nina are locals, making them the most likely. Nina would be more ironic and going that route could potentially end Reggie’s crush on her, opening up an easier to write relationship with her and Ed. Thomas is the most likely choice however, since the recent comics about how he and Reggie are similar seem to be leading up to this. Regardless of who it is though, the real question is: will it lead to confrontation, or will it lead to Reggie rethinking things and ultimately changing the way he acts?

If it was someone we’ve ‘met’ I think anyone he’s at odds with is too easy, which rules out almost everyone … but how about something really nicely twisted – its Nina! On the other hand, the dialog indicates that is is not a name he recognizes … on the Grasping hand, they could be in a maternal line somewhere …

Hope you feel better soon and got your medications sorted!

In all likelihood you body is still fighting the infection (even if its actually gone) and with any luck (you just might be due some at this point) the joint pain and flu-like symptoms are due to that and will abate quickly.

I feel you on the account recovery mess. I recently had Microsoft decide my Skype and/or e-mail usage looked suspicious and lock my account until I proved who I was. Problem is this was a Hotmail account from the end of the twentieth century. You know, back when you cold get a Hotmail account. The account information hadn’t been updated in just as long.

FORTUNATELY, I managed to guess the password on that account, after about a week of on-again, off-again efforts. And then I could start the chain of e-mails through abandoned accounts to recover the Hotmail/Skype account I actually still use.

So yeah, I wish you the best of luck in recovering this mess, and applaud your proactive stance in recovering it BEFORE it blows up.

Yeahy, Microsoft is really good about telling you what you can and cannot do with your own computer. Sometimes I think that’s why Bill Gates left the company: he was tired of being a d!ck (and every good geek knows and follows Wheaton’s Rule!).

I’m still not actually what set off their fraud detection system. I would’ve appreciate the consideration had I had anything of financial value associated with that account, or any way to actually get in other than an e-mail account that had lain dormant for over a decade. And had I not ALREADY been pissed at Skype for the whole MSN Messenger merger fiasco(in which I lost contacts wholesale, recovered them, then lost the ability to see if they were online) and, you know, for being Skype in general. One of the most horrible pieces of software I’ve ever had the displeasure of using, and the only one I’ve ever been STUCK with.

Looks like you might have to use some password recovery software or possible other legal grey areas. If it was a simple password, it could be found within minutes, hours or days with the right tool.

The Aunt, who married in to the clan.

You’re scaring me. I was thinking the same thing.

Hmmm getting a bit of a hatfield and mccoy vibe here.

I could correct dear Jackie’s grammar, but in all likekyhood, my comment would probably be ignored. :P

I’ll bite. What do you think I said wrong?

It isn’t grammar, but you did spell likelihood ‘likekyhood’ …

Was making a bad joke at the silliness of the typo’d word: Likekyhood.

But I failed in that once again, I used “grammar” when I should have used “spelling.”

This is why I’m a math major, not an english major. :/

Take it from a confirmed grammar Nazi: it’s just a simple typo.

One good approach for slightly improved security on your accounts – without having to worry so much about remembering a bazillion username/password combinations is to use what is called a “password vault”. Some other folks on here have alluded to it in their comments. It usually boils down to creating a single file with all your password information and then encrypting that file. That way you only need to remember the password to that one file. Of course if you make that file an MS Word or Excel file, I can run it through some readily available software that will crack that password… so be careful about where you store it. Sticking it on an external flash drive is a good idea rather than storing it on your computer. Naturally there are a lot of vendors out there that are willing to sell you a product or device to do the same thing, but I like the idea of just shelling out a few buck to put it all on a flash drive that I can then control.

Now if only I wasn’t so absent minded and could remember where I left that flash drive….

I can almost taste the crossover potential with Ginger’s Bread. Doesn’t matter if it was the Days or the Balsamos.

Password Safe is an awesome program that is also available on mobile and you can store your encrypted password file on DropBox so you can access it from all of your devices.

Also, if there have been purchases, you may be able to update the email address on the account by providing the cc info that was used for such purchases. I would call Sony customer service and go from there.

Try to use free software to encrypt the password file. And make sure you have all the relevant source code so if it ever stops being supported for your machine you can be or find a programmer who can make it run again.

Or just make a copy of your paper password file (photocopier works) and keep it in a safe place off site(such as trustworthy friend’s place).

Ooh, the concern is kicking.