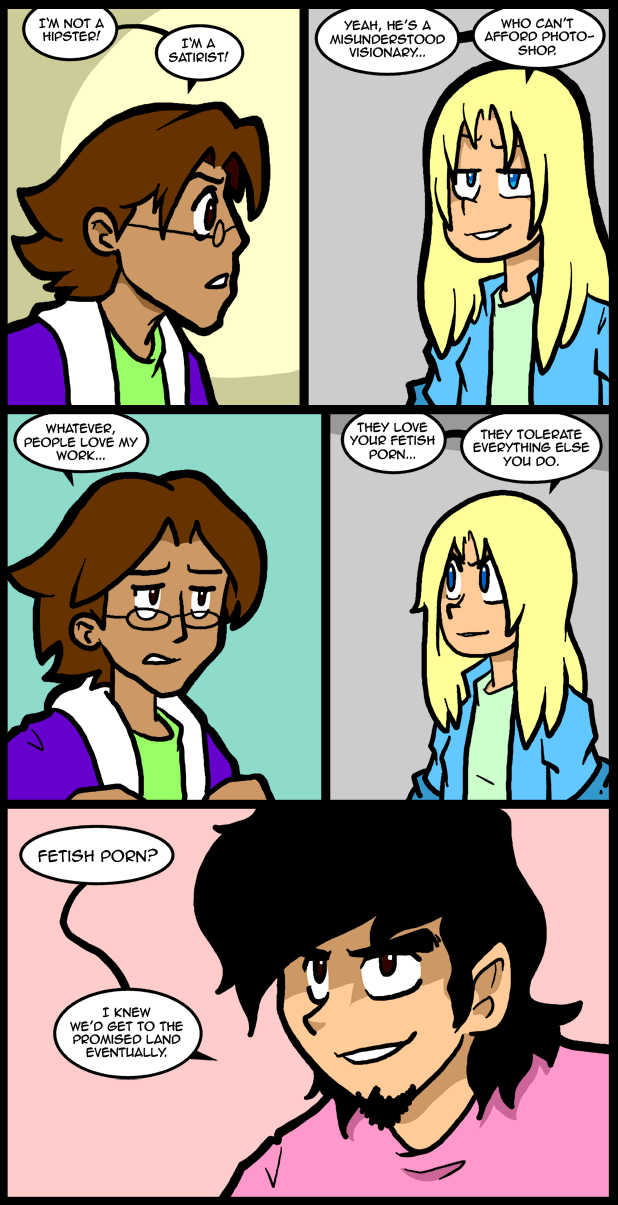 This is the first of the three pages I worked on while in the grips of this horrifying flu that’s ravaging the country. If things seem a bit off perhaps you can see fit to forgive me. I have never had a flu quite like this one. It attacked me in strange ways and left a parting shot, as it were, as it faded. My left leg turned beet red up to the knee, swelled about .5 its normal size, and has remained that way for most of the time since I overcame the illness. It also hurts. After a night of sleep I can hardly stand or walk. It seems to have inflamed my lower back on that side as well, where the leg connects to my hips and back. It abated briefly one day, but returned to its inflamed state after a night of sleep. So, I will be visiting a doctor at some point tomorrow. I suppose the flu allowed some other festering malignancy the foothold (Pun definitely intended) it needed to gain ground.
In passing I should mention that the dogs scratched my leg at various points while I was ill, and on the first night of being truly sick I injured said leg somehow, in my “sleep”. What woke me up was the quite unique pain of having my testicles twisted into my smallclothes quite forcefully. It is unlikely anyone will ever know the exact circumstances that led to me stumbling around a dark room, trying to free my family jewels from the Devil’s own Rubick’s Cube. Perhaps these events are unrelated, but it was at that point my leg became sore and started to swell.
The upside to all of this, assuming that I don’t die, is that it has finally put the fear of death into everyone around me. That fear is, apparently, the only force on earth that can stir my family to alter our ways. Telling people you feel like you’re going to die has much less effect than looking like you could. On balance I would rather it had not come to this, but silver linings.

I’m actually one page and a half down on the week. If I can stay awake for a little while after dinner I’ll try to at least get page 3 to an inked state. The coloring should not be too hard to get done on Monday. That said, it is mildly excruciating to sit in this char and try to work. Really though, there is no comfortable way to work at the moment. I might look in to switching chairs though. Maybe one with no arm rests would work better.

I’m more than willing to wait for a few days till the next update. If you need to take some time to rest and heal go ahead. I’d bet a lot of other folks would say the same.

Anyone else willing to wait till Friday for the next update?

I’m practically done with Wednesday’s already and Fridays is not going to be taxing as long as I can sit and work. But I appreciate the sentiment.

Yeah, I second the motion that we wait for the comic while you take care of yourself.

I agree that your health comes first. We will be here waiting patiently should you need us to do so. After all, the sadness of knowing that our favorite artist is suffering is much worse than the wait could ever be. Apologizing if that last statement seems over dramatic, but that makes it no less true.

Oak, you expressed yourself so well that I copied your statement whole at dub-dub-dub Kahmith dot com. But I gave you full credit for the words. You just said it so well,… And another WebComic artist has it so bad that cannot work for flu! Thanks.

Not trying to spook ya but it sounds like a DVT, i suggest you get in.

I’m staying in the hospital tonight.

This wierd flu that you have you say you have inflammation and swelling. This really reminds me of the chikungunya fever that we had here in the Caribbean. My dad had it and it caused extreme joint pain and swelling. he could barely move because of the pain. I dont know if it could be the same thing but it sounds similar.

I am sorry about your death flu. I would like to mention that, even when sick, your comics are more interesting than other, healthier, cartoonists. So props.
Feel better!

The poor little putz is doomed.

Never thought I’d say this, but I fancy Bridgette.

NINA IS LOVE,NINA IS LIFE

But Carol is SHE WHO MUST BE OBEYED!!!

I’ve had something similar due to an infection in my skin (after barnacles ate a chunk of my leg). Cost me a 3 day visit to the hospital and IV antibiotics for several weeks after. Hoping yours is not quite so bad. You definitely have my sympathy though. Glad to hear you’re getting it taken care of. Get well and take as much time as you need.

We finally have a quasi-autobiographical character?

I like the “foreshadowing” on John Kepler’s face in the fifth panel. He’s had his butt beaten for years fencing with Thomas, and Neil is certainly no Tom. Stand by for a well-deserved ripping!

Sorry about your bizarre flu. Your immune system was already compromised, and it sounds like there’s some opportunistic secondary infection having its way with you. And will it call later? Nooo! My sympathy, anyway; I had the Cold from Hell over my 4-day holiday weekend, then recovered well enough to go back to work today.

I absolutely love that last panel, and now have it, slightly modified, as my desktop.

It does sound like DVT or a nasty infection; either way make double-damn sure you get to a doctor.

Ah, he’s one of those that feeds the internet beast! John is one of those rare individuals for whom the nets is not enough. He happily throws himself into potentially bizarre situations so he can see the rainbow of humanity for himself!

Oooh, that sounds bizarre. That almost reminds me of the story this guy told of how he got Elephantiasis. http://en.wikipedia.org/wiki/Elephantiasis I don’t think you have that but it involved some serious problems with the flow of ones lymph and I wondered if your disease had attacked your nodes if the flow in certain areas had been disrupted.

Whoo, now Noah and Handsome McTousledHair can bond over the miracles of pornography. It’s everything I ever wanted in a web comic.

Okay, first of all – that sounds like the flu from hell all right. Hope you’re taking care of yourself. Second – Well, looks like someones day has been made.

Been reading since that QC crosspost. First time posting lol.
I just felt obligated after your post the other day about wondering about people passing and staying.
ANYWAY, I just wanted to say that John’s expression is the best in this panel lol.
Thanks for providing with all of us with laughs and get better soon.

Something is wrong with your site. the only way I can access it is to google your archives and click on the last entry, the home page gets a “Can’t find” page from your server.

This is the URL I get when I try to get to your home page: http://betweenfailures.net/cgi-sys/suspendedpage.cgi

Cheers! I hope your tech support can get it unravelled.

The redirect is broken. If you change it to .com it’s normal.

Jesus christ I lost it at the last panel. I now have a SECOND quote from john to use in my daily life.

John’s face in that last panel. It’s so… deliciously predatory!