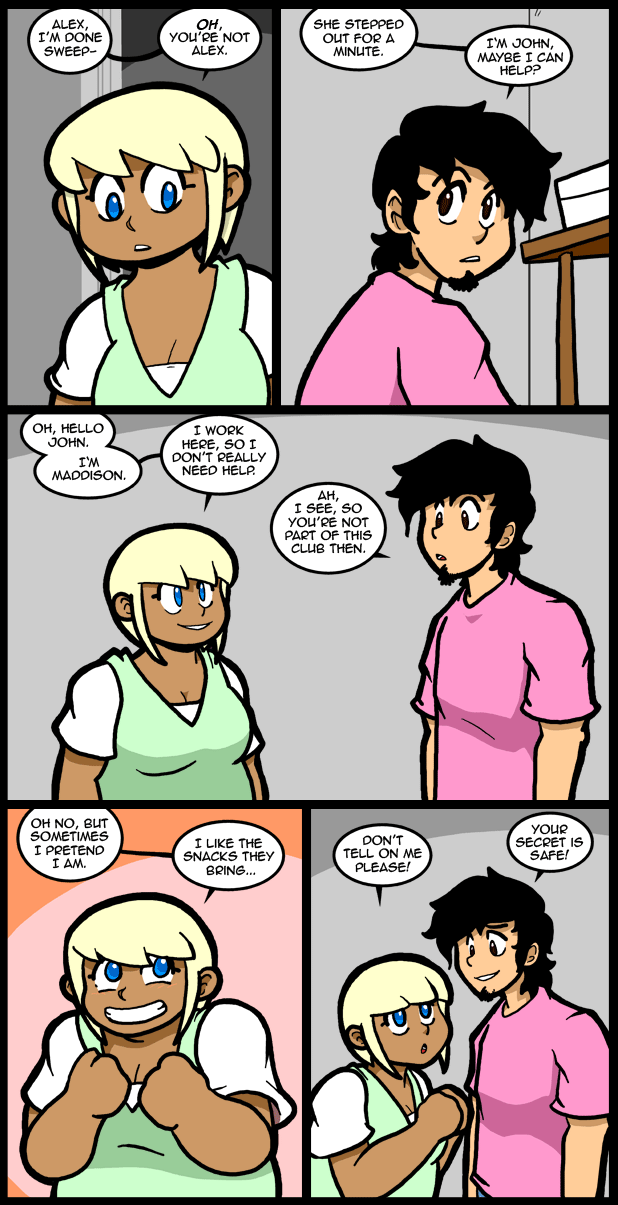 Yay! Another character for people to keep track of! I won’t spoil the fun of learning about Maddison for you, but she is one of my favorite side characters. I wasn’t sure exactly how I was going to depict her, since her original concept has white hair and dark skin to the point that it doesn’t seem natural in the “real” world. I kind of split the difference and made her about as dark as I felt I could get away with for a Caucasian character and gave her blonde hair. An uncommon but not impossible mixture. She’s less dark than my grandfather (or maybe as dark at some points), so still in that white person skin range. Regardless she’s still a bit of an anime trope, but I don’t give a fuck, son! Well, her coloration is anyway. You still rarely see fatties in anime.

Anyway, the furry club meeting is, obviously, going to introduce a handful of less than important characters. I think they’ll be a fun addition to the lore anyway.

The post is a little short because I took the Teen to town to spend time with the family of her… boyfriend? I guess that’s the right word. Anyway, she’ll be back in a bit and wants to post, so come back in a little while if you like Teen Corner. I’ll let her add it as soon as she gets home. It’s probably at least 30 minutes away, so schedule accordingly.

hey interweb world! how goes it? I am now off school for thanksgiving break yaaaayyyyy!!!!!! I kind of had a terrible day but then as Jackie mentioned I went to spend time with…my boyfriend! yes I have a boyfriend now shocking huh? I also spent time with his family and it was surprisingly fun, they were very welcoming and interesting. I don’t often do the meet my parents thing but I actually am starting to like his family, they asked me to come back again sometime this week so they must like me! me and my boyfriend and his sister watched if I stay in their creepy basement. the movie itself was kind of terrible not gonna lie I wasn’t a huge fan but being with him made it worth while and yes I do realize I sound like a love struck annoying teen but guess what? I don’t give a fuck right now son!! I’m embracing happiness while I have it. I’m nervous to see how thanksgiving goes, my family is currently full of the drama times which is not fun but hopefully it goes well. if not then I’m sure me and Jackie will amuse ourselves while everyone else wallows in the drama. also I will enjoy mass amounts of turkey and pie because why the fuck not? it shall be very delicious mmm cant wait for pie! I get to help start making them tomorrow! I like cooking so should be fun anyways I’m half falling asleep as I write this so I believe that’s my cue to go to sleep night peeps!!!!

Is she like a Japanese kogal or am I assuming too much.

That will teach me not to read the stuff below first.

Your ignorance is sending me to Google, to learn something new, so it wasn’t without purpose.

As Confucius never said, “A Google search a day will prevent your brain cells from rotting away”

She should be in the club.

Maddison is the Library Jo!

Which means that John has some familiarity to work with.

I could think of several real world possibilities for Maddison, from blond with a deep tan, to hispanic with bleached hair, to mixed race. Here in Southern California, it isn’t even that uncommon a look.

Or even a natural blonde with dark skin by way of the Solomon Islands.

Sweet mother of god… innocent face/attitude, dark skin, light hair, chubby-style… aaawww crap right in my weak spot, damn you! Here I thought I couldn’t find anyone I liked more than Carol, and here you go breaking the 4th wall with Maddison…

I’m glad you approve of Maddison.

Also, I don’t think I broke the 4th wall unless you’re using that concept in a way I don’t understand

Ahaha, sorry yeah inside joke I didn’t realize I was using.

4th wall to my friends and I is basically shattering our sense of reality or how things work(ie: wtf moments). Basically I didn’t think I’d find someone here I liked more than Carol, then you come in and bring Maddison into the picture.

You find yourself locked in a room with Carol, Alex, and Maddison when suddenly………….yeah, I got nothin’. Exhausted my imagination with that. Pleasant enough while it lasted.

“Regardless she’s still a bit of an anime trope, but I don’t give a fuck, son!”

“I sound like a love struck annoying teen but guess what? I don’t give a fuck right now son!!”

Cool new char Jackie! I actually started my break today, but I live in Stl. Mixed feelings about that one.

Love Maddison! My former boss and his wife have a daughter about 15 or so and they spelled her name the same way. To the best of my knowledge, she doesn’t bleach her hair, and the last time I saw her, her contacts were sort of a gold color. I’d say her complexion was in the semi-sweet range, though; her Mom might best be described as Milk Chocolate and her Dad as almost blue-black (he’s quite dark).

The library’s Maddison is a cutie, but she seems a little shy and embarrassed; one might say sheepish.

Perfesser_Bear, ewe are a baaaaaad man — I can tell you’re intent on ramsacking this forum, fleecing innocent trolls and then leading them like lambs to the slaughter. Mutton my watch these crimes wool shearly be punnished. Your end looms!

Maddison is adorable. I hope she gets to stick around for a while, perhaps even beyond the furry arc.

She may soon be in conflict with The Boss…

Cool new char Jackie! I actually started my break Tuesday, but I live in Stl. I guess you could say I’m experiencing drama times as well.

John is one chapter away from having his own 90s anime harem.

man the Teen is always soo full of energy.

Madison is so cute! And seems to think John is too, huh.

Just in case anyone is curious dark skin and blond do occur in some place fairly frequently. http://www.nytimes.com/2012/05/08/science/another-genetic-quirk-of-the-solomon-islands-blond-hair.html?_r=0

If the second to last panel is anything to go by, Brooksie has some competition in the cute and adorable department.

If they get together, the world will explode.

You misspelled my heart as “the world.”

@Crave:
‘Tis indeed a short post, but thank You for taking the time to make them.

@Teen:
Do be careful with Your Heart, Miss, for they are broken far easier than they can be mended.
Honesty is a vanishing trait, try naught to lie if You can help it, but remember that there will be times that the truth should be tempered with empathy and the kindness it breeds.

Verily. For though the truth should never be broken, it need not always be spoken.

She could have been from the Solomon Islands with that original description.