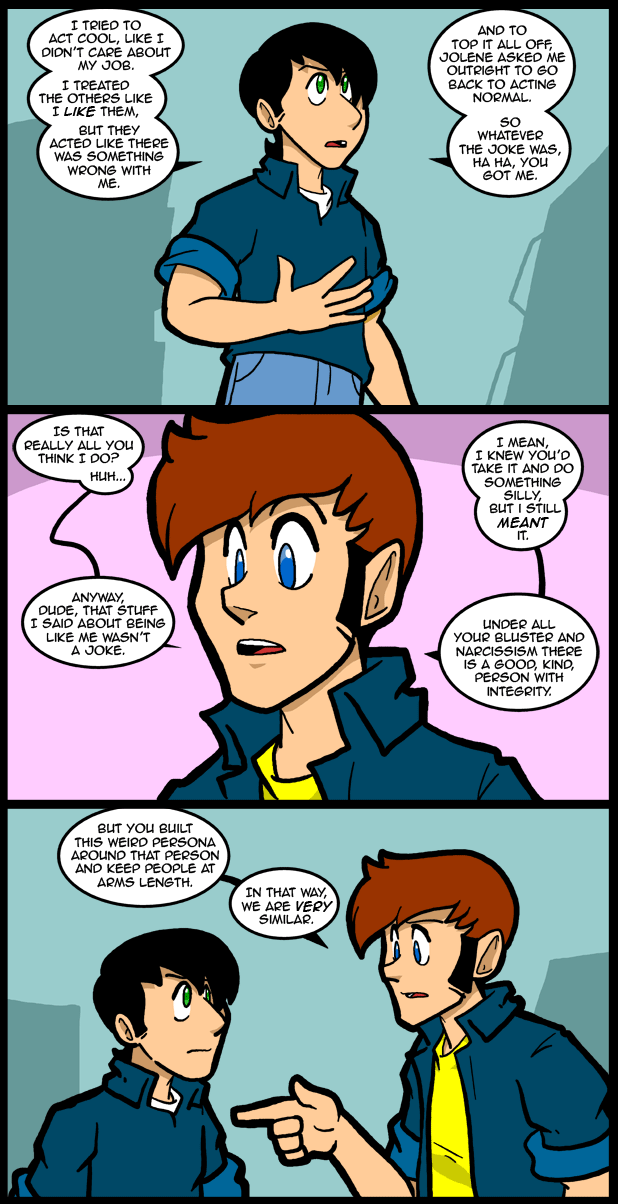 Today I went to the dentist. I have two cavities. T^T They are right across from each other where two teeth touch. It’s been a long time since I had a cavity, but I’ve been drinking way too much soda recently. It’ll be a while before they can be fixed, but the dentist did recommend some gum that can help with keeping cavities at bay for a while, so that’s something. After that sad experience I met up with some friends I haven’t been able to see for a long time. It was nice to visit, but one of their kids wasn’t feeling well, so we had to cut things a little short. That’s the cost of being a grown up, I guess. This is a really busy week for me. I have to go out of town again on Friday, or Thursday, and the Teen has her play on Saturday. Which means I really have to get busy before that. Guh. Gotta grindstone that nose, or however that is… I’m going to try and get my pdf thing to make the updated file for Patreon subscribers right now. So if you are one look for that in a few minutes after this goes up. After that it’s time to put the Teen to bed. Anyway, I’ll see you all on Friday, or whatever. XD

Where the wild teens are.

I’m a tired teen and I very much want to sleep, I’m on the verge of passing out as we speak lol. while Jackie went on an adventure I was stuck in school!!! not fair Jackie not fair! I am sad that I didn’t get to go and get taco bell but on the bright side I think I have a new boyfriend, he’s super sweet and its going well so far, score for the teen! I’m just hoping that big brother and the aunt approve of him, Jackie seems to be fine with it unless he’s lied to me lol. on the sad side he’s an ex of this girl who lets just say hates me most the time because I don’t deal with her yelling at me and telling me what to do, so drama central here we come again. I’m hoping to mainly avoid it so I’m not like rubbing it in her face or anything just occasionally laughing on the inside because now she’s trying to be all over him and he wont deal with it. I know it sounds mean but she’s screwed him over pretty badly so I feel its kind of justified but maybe I’m just a bad person, I don’t know. my play is Saturday and I am so incredibly nervous and excited all at once, I really hope it goes well. I’m sure Jackie will share his opinion on it after he goes to watch it,my brother and sister are supposed to come to so I’m happy about that. this week seems to be flying by and I haven’t had any homework so far, knock on wood hopefully it stays that way. I’m hating this cold weather, its blazing hot in the school which is annoying, I’ve had bad headaches all throughout the week and think I’m getting sick. curse you winter curse you!!!! any ways this teen is going to crash for the night so talk to you next time and sorry for skipping out on you guys on the last post I’m doing better somewhat. goodnight all!!!!

But if you don’t keep people at arms length there likely to get close enough to punch you in the face.

Ah, but then you’re vulnerable to projectile weapons.

Best to keep them where you can get at them with a grab, no?

I prefer to arm myself with projectile weapons.

I feel these comments would work as an XKCD comic.

It sounds like they’re playing Smash Brothers to me.

TheTeen: you aren’t a bad person; you’re human. It’s very human and understandable to have that reaction, especially since it’s a guy you like and a girl you don’t like! I’ll try to keep advice to a minimum since you haven’t asked for any, but by dint of being an old fart, some advice is just gonna spill out whether I want it to or not; if the girl does try to start stuff, do your best not to rise to her bait, and try to make sure there’s an adult audience to anything she tries to do to provoke you. Then you get the benefit of both being the bigger person AND having some protection in the form of adult witnesses if you need to complain about her bullying you or the like.

Jackie: Enjoying the strip as always. I really love watching these characters develop and unfold, and for the record, I couldn’t get into Clerks at all. So by my personal standards, you’ve got more than one on Kevin Smith.

You can only open the door, you can’t make someone walk through it.

You and Jackie having similar health issues? I know he had headaches a while back. What are you two doing that’s making you both inexplicably sick. Maybe its some kind of cyber mummy rot from all this zombie slaying… Enjoy you part in the play: Break a leg! (that just never sounds right I don’t care what tradition says.)

“Break a leg” means “Make the audience bend their knees (bow)” so it’s actually a wish for good luck, not just a weird tradition or a reverse-superstition thing.

There is a similar saying in Italian- Vado en bocca al lupo. Or, Go into the mouth of the wolf. Anyone on stage can tell you that the seats to the audience does look like a beast ready to devour you. But nice to know the origin. Just like the truth that ruined that all-too-famous skyrim meme- something about proposed guards “taking some long object to their leg” or something.

Wikipedia lists several potential origins the first I think being the one you meant except in their version it is the actors who bow to the audience because, “pleased audiences may applaud for an extended time allowing the cast to take multiple curtain calls, bowing to the audience.”

I kind of liked the Greek one. “In the time of Ancient Greece, people didn’t clap. Instead, they stomped for their appreciation and if they stomped long enough, they would break a leg.”

Hah, you made me read the very thing I was purposely avoiding reading to save time that night. *shakes fist* :-P XD

well bouncing between the furries and Reggie. Yep I can see where this is going.

The teen found a boyfriend while at Taco Bell? Does she realize nothing good comes from Taco Bell?

@Crave:
I heard that growing up can be aggrieving.

Ah, such gravity demanded by a cavity…
Eating chocolate before brushing Your teeth is actually good for them.

@Teen:
Could it be that the ex is jealous of You?
Could be she noticed the boy liked You before either You or the boy knew,
And tried to react preemptively…
Try not to rub it in though, You ARE the “bigger person” (emotively / psychologically, naught necessarily physically)
It could be Your refusal to deal with her [insert slang for faeces]
heartened him to also refuse to deal with it… mayhaps she may eventually realise that being a [insert correct term for female caninus] is naught really popular and may change her ways to be nicer…
Or naught.

Ahhh, reading The Teen’s blog makes me glad that part of my life is over. It’s a cool time to be alive and all, don’t get me wrong, but I am so fond of the ability to go off and have adventures and limit the drama in my life. It seems school drama just ATTACKS and you can’t get away from it.