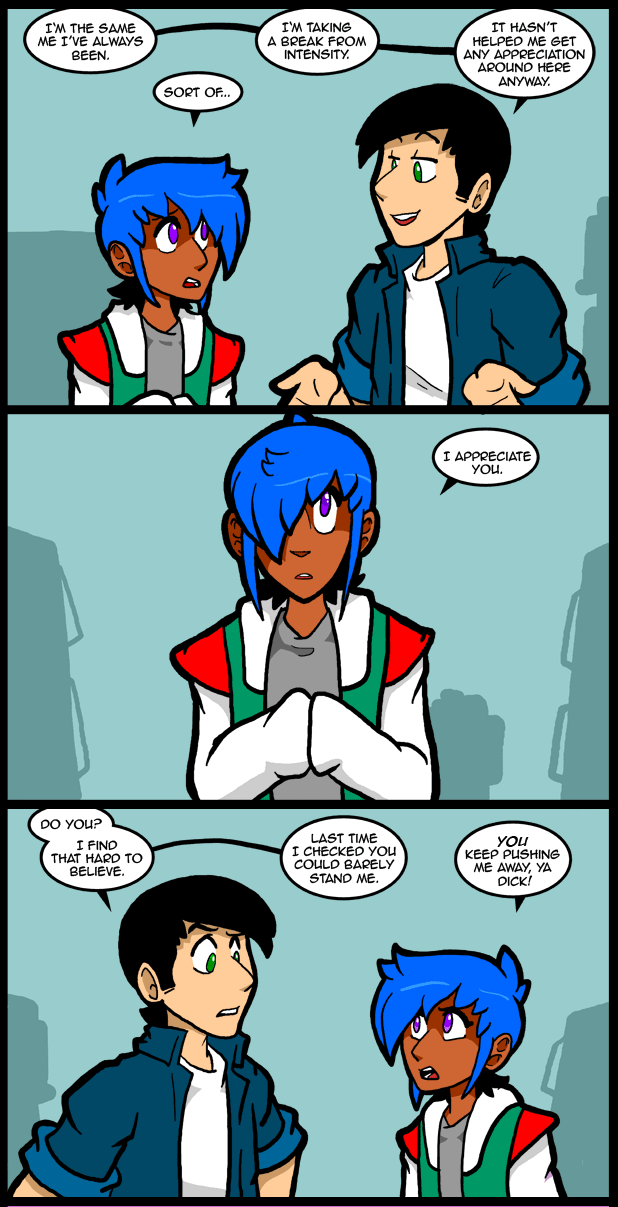 I think it’s safe to say that where Reggie is concerned Jo is primed for anger. Frustration is a good catalyst for that.

I’ve noticed that a lot of people seem to think that Reggie was much less like himself before the incident with the flaming display. That’s a failure on my part to properly illustrate that he was still really irritating. I told that story from Jo’s perspective and she is the type of person people want to protect. Reggie is officious, and can be callous, but he’s not immune to the plight of the weak. He has a good heart, if a somewhat misguided one. She had a different experience with him than the others. In fact, they all experience Reggie in different ways. How they treat him tells you as much about them as it does about him. Nina is irritated by his infatuation, and self obsession. Thomas is actually kind to him, even friendly, but also patronizing. Carol dislikes him because they have very similar personalities, although she would argue with you about that. That’s actually kind of telling too, because of all the people in the store the one who gets along best with Reggie is the one who fell in love with Carol. Edward instantly clashes with Reggie because Reggie instigated it. Which is something Carol also did. John doesn’t have much of an opinion about Reggie apart from being mildly annoyed because he is an emotionally distant person.

When we first meet anyone we paint a mental picture of them in broad strokes. As we get to know them we paint in more and more detail until we go from having an impressionist view of them to a realistic one. I hope that meeting Reggie helps people look more deeply at the irritating people in their lives, because they tend to be the ones that need the most help. Of course some of them are just assholes and sociopaths, but it’s important to make sure. Someone like Reggie can become your most loyal friend if you put the time in to understand them.

Just so you know, the Teen was very amused by all the comments, even the passive aggressive ones.

Is it bad that the 2nd panel made me think a possible reggie brooksie pairing? That last panel made my laugh pretty hard. This page went from sincere to snark pretty quick.

Well they started as friends in the past… It definitely be nice to see them return to being so at the least.

Let’s wait and see if they return to that…

But then again, I ship anything that moves.

It’s nice to see Jo standing up for herself.

Reggie certainly is a puzzle to me. I think that he actually wants to get along with his coworkers, + not act like an b***hole, but [I think?], his corporate family encouraged tyrannical, sarcastic, + power-hungry behaviors in him, because his family members like tyrants in their circle.

I think Reggie wants to be a Thomas-like, OK dude, but Reggie is just starting to make baby-steps on his path to being a Thomas-like-dude.
[ Erk? Where did that speech come from? I think I’ve hit the Kung Fu TV show episodes too much, lately]. :)

That sounded like something out of the Big Lebowski, actually.

He keeps pushing you away because you can’t stand him. You can’t stand him because he pushes you away. Enjoy the cycle of douchebaggery where no one is truly innocent. Maybe now they can start a new cycle..of friendship. Or the water cycle that’s a good one.

Similar personality to Carol… but Carol is generally liked, even if there is some conflict. Is this because she’s better at it than Reggie or… because as a girl she gets a pass to be rude, whereas a dude that’s rude automatically gets “what a douchebag” reaction?

Nah, see, women who are rude are “bitches.” Difference between Reggie and Carol isn’t the second sex chromosome necessarily, but how they approach their rudeness. Carol worked for respect before jumping into being rude to everyone, and, like Thomas, does it in a sort of caring way. Like, maybe I read into it too much, but I genuinely read Carol’s douchebaggery as “Hey, you’re being dumb, and I’m not afraid to tell you so for your own good” whereas Reggie 1) Hasn’t acquired his respect in the shop yet and 2) goes about his douchebaggery in an entirely self-centered way. He complains about how “everyone else messes up” but apparently he’s perfect. Ya know?

If you wanted to prove we like don’t Carol because she’s a girl and gets a pass, it’d be nice to have something more substantial than “because I feel like she’s being secretly nice when she’s a jerk. whereas Reggie isn’t.”

I mean… at least say she’s giving them a hard time for her own amusement when she’s not being nice, and he’s just putting someone down because they stink and need to do a better job in his eyes.

I think a lot of the difference is… the reaction other’s give to them. Carol, being supported by her coworkers, makes her a much more pleasant individual than Reggie, and a more effective employee to boot. Not that Reggie isn’t at fault for his ostracism to at least some degree but… Carol had a whole arc where she didn’t get along with Mike because she basically couldn’t get over what a loser he was, until she did. That’s kind of the exact same thing Reggie would do.

Lord Reginald, thine ass weareth thee, like unto a hat…

I don’t know if any of this audience has been been following Gotham on Fox, but I think Oswald Cobblepot makes me appreciate Reggie more. That said, they both have that beaky nose and the dorky haircut. OMG Crave, are you working for Hollywood now, designing characters?
B{P}

We know a something about Reggie’s family — his Scary Cute and Powerful Aunt seems to be a Force to be Reckoned With. As much as we know about Jolene’s childhood (oh, look it up in the archive), we know little about Reggie’s life before he worked at the store, or today outside of the store. Why is he such a jerk? Was he neglected or abused as a child? Did the other kids pick on him at school? These are the sort of questions that make him an interesting psychological case.

Or you know, maybe he’s just a dick. That does happen you know….
Some people are just entitled and can’t properly accept blame, and their personalities reflect that.

That being said, I don’t actually think that’s the case for Reggie. I think there’s a bit more to him than just entitlement and his inability to properly accept responsibilities for his failures and that’s why he’s interesting and not completely hateable.

In a quasi-related note, the guy who plays Oswald Cobblepot on Gotham appeared in a couple episodes (so far) of The Walking Dead (to help you recognize him, when he first appears he takes Rick’s watch. We next see him in the Season 5 opening episode, where Rick gets his watch back.)

Also, Brooksie had a different experience with Reggie at first because, when she was first hired, he stopped pursuing Nina to try to get a little Jo-pop (which, ironically, went down in flames. But that wasn’t his fault!)

Reggie’s always been my favorite so it’s nice that he’s finally getting some other love. ^^

Why do I fell like if we ever met you’d end up knowing me better than I could ever know myself? If you ever ditch comic writing (please don’t!) I would recommend psychology as your new field of work.

So following the recent removal from my wisdom teeth I have been catching up on all the webcomics I have fallen behind on and I must say that out of the ten or so that I read yours is the best. Keep up the good work, its a treat to read.

One of my favorite comics was the one where Thomas showed off the custom name-badges he had made, and he revealed that he had made one for Reggie too. IIRC he said something like “the day may yet come again where he wants to be one of our band”. It made me like Thomas more.

I already liked Jo a lot, and today’s comic make me like her more.

I’m pretty sure Reggie is still annoying, but in today’s comic he looks like he actually does care what Jo thinks of him… so maybe he can be redeemed, and I love stories of redemption. (Like _A Christmas Carol_! In Christmas ads they always show Scrooge as a scowling person, never the genial reformed Scrooge from the end of the story. I wonder why. I’ve always seen him as a figure of redemption, someone who was able to make a 180 degree turn in his life. Granted, he had the most extreme intervention to push him into it, but in the end he did make that 180 degree turn.)

As always, well done. I really love this comic and care about the characters.

Hmn, I shpy with my leetle eye a strange purple line at the bottom of the comic; it’s rather suspicious, as if it was supposed to be a longer strip but something got cut. Hmrn. Just a little thing I noticed. Good stuff per usual, though. :D

Actually I use the same template for every page and cut it to suit the text. Since photoshop cs2 stopped working it’s much harder to see the crop lines now.

That’s actually kind of telling too, because of all the people in the store the one who gets along best with Reggie is the one who fell in love with Carol.

Thomas loves Reggie as a person.

Slap a label on that couple because they’re being shipped.