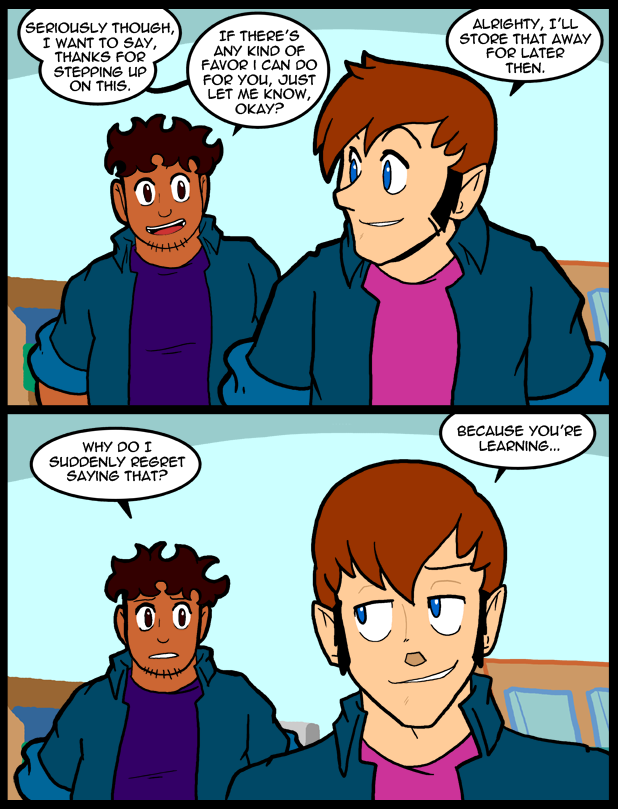 Sure, he likes Mike, but it’s important that there’s still a little fear there. XD

I had a splitting headache today, so I decided to transfer my Wii into my WiiU. The pair takes up too much space, and I rarely use the Wii anyway. I just want to finish a few DL games on it and be done with it really. It’s pretty disappointing that the Wii shop and the WiiU one aren’t combined, but Nintendo really has trouble with internets, so I guess I just have to accept that. I want to finish the Strong Bad games, and Final Fantasy 4 After Story, or whatever it is. Will I ever? Who can say? But I did do the transfer, so there’s that at least.

It was a movie extravaganza with the Teen this weekend. RIPD, Zombieland, and The Wolverine. They were all good, which is totally old news, but whatever, they were new to me.

Someone said they wanted to see the One Piece figures I got. I didn’t want to mess with trying to take pictures since they always suck so I stole two from the internet. Please don’t do that, and also credit the source. I hope you can forgive my transgression. 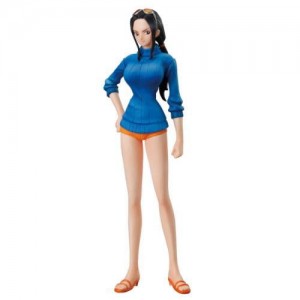 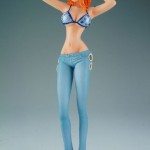 That’s the variant Nami too, so the color is the same as mine. I really like the Usop from the set Robin comes from. Hopefully I can find one. I’d settle fro his time skip outfit if I had to. I think the Zolo from the set Nami is from is the one I want of him. Guess we’ll see what I can do about that.

What with the Pokémon Bank being released I decided to breed myself a dream team to take all across the new game. I didn’t want to get to the end and find out they were rejects though. Apparently the breeding system is very complex now. You can end up with monsters that never really amount to much, just like with people. X3 So I asked around a bit to see what the minimum was that I could do to get at least above average pokemon. A kind reader took pity on me and traded me a shiny Japanese Ditto. Apparently with an item held it will transfer a minimum of 5 superior stats to any babies it has. So that’s what I’m gonna do. Breed a little team of all my favorites that will be a little better than average hopefully. I’ve accidentally had a few abnormally strong Pokémon over the years. The Salamence (sp?) that I had names Snarl was a pure monster. That’s why I featured him in the old one shot I did. A link would be here, but I don’t know where it is… Anyway I want to play the new game with what I want to use instead of all scattershot. Then I can just fill pokedex holes or ad new monsters to the team as I find them.

Oh, Thomas… good thing he won’t abuse the favor… much.

The Pokemon breeding system in this gen is actually a lot simpler and more transparent than it’s ever been, in my opinion. I can explain it quickly at some point. Basically it’s gotten a lot easier to breed good IVs into things.

Having the flu or whatever I have is so fuuuun.

The only trap that Mike really needs to fear is the one under his nose.

Getting into Pokemon Breeding? I pity you, son.I really do.

Also, that Nami figure was all over Japan when I went last year. Almost every store I went into had that on display somewhere, especially the Sega arcades which had them in most 500 yen crane games. That said it is a fine figure.

I’m only going as deep as it takes to make my dream team. Should be able to finish the game easily with them.

I’d totally ditch my Wii if it weren’t for the weird fact that the Wii U took out the Gamecube controller ports so you can’t play your GC games on a far more advanced machine. It’s sort of like when they slimmed down the PS3 so it wasn’t so bulky, but then took out the backwards compatibility. I just can’t see the purpose of releasing something that’s supposed to be better than the last, then taking out the things that made the last thing good.

Since I still have the GameCube it’s kind of a toss up over which thing to keep. The problem is that Nintendo only lets you own one thing now. Can’t have a wii account on two machines anymore.

The problem is more that they are now selling the games (You can specifically search on the PS3 in the Playstation store) for money, so basically you have to buy the games again because of the non backwards compatibility, and most of them are terrible ports (as in all they have done is taken the game off the disc, made it compatible, and sold it to you, there is NO upgrades to speak of)

Depending on what translation you get Zoro is called Zolo, which is the one I’ve always read.

I’m a really big fan of your comic so I was wondering if you go to comic conventions and if so what ones?

I’ve never been to a convention, and at the moment they aren’t something that’s a monetary possibility. If you’re ever going through Colorado maybe we can get mcdonalds though. :D

Does that go for all fans? (You should probably be very careful answering this.)

As long as you’re paying for yourself. I can’t take everyone out to McDonalds.

What state are you in, by the way? I’m honestly curious because you’re someone of whom I’m enough of a fan I’d pop by to say hello and maybe grab a bite with (assuming your interested of course… not trying to be that creepy) if I was ever in town.

Wow, that sentence got away from me… I’ll leave it there as penance to my former english teacher…

Huh, well I’ll mention it if I’m ever headed that way, maybe I’ll buy you lunch.

Hey I could spot you a Jr. burger and fries.

Believe me, if I ever do any convention, anywhere, I’ll tell the congregation.

If there’s ever a convention in TX, please let me know.

Of course, the surprise may kill me. I’m pretty sure these things never happen in TX.

uhh…I recently heard of a few that took place in TX…I can’t name them NOW nor do I want to redirect traffic away from this awesome webcomic towards another webcomic, but I do know that it’s the case.

I have unfortunate news. I’m not sure if it’s just me or anyone using Chrome but it’s blocking access to the site on account of malware. I just wanted you to be aware of this, because it’s, for some reason, a familiar feeling situation. Didn’t this happen once before?

just clear your cache, that should sort it out

Lol Mike is almost there, eventually he’ll learn to not say such things.

Actually Crave, I think clarification about that Ditto + item you recently received is necessary.

The Destiny Knot (judging by the description given for the item) guarantees that 5 stats are transferred from the parents instead of the usual 2. It does not guarantee that those 5 are the best the parents have, it only gives you more control over what the end result will be

Yeesh. This is a bit much. I think I’ll just breed a couple and hope for the best. I don’t want to turn pokemon breeding into a career…

Yea dude but when the Ditto is 6IV … it doesn’t take math to know that the time will be shortened considerably. I put a random in with my ditto and I got a near perfect 4IV on my first egg.

But that’s besides the point. He has the basic tools and someone linked a neat little breeding chart on da tweetz, it’s not cool to scare a beginner with the such heavy logistics. Start throwing Xs in there that’s like Algebra…nobody likes Algebra.

Uh, yeah. Most of your post seemed to be in a foreign language, and AHHHHHH- you cut her head off! (some people do look at things above the shoulders. No, really. It’s true)

Not everyone shares my hobbies or interests. I accept this as part of what makes the world interesting and whole. Also, the website generated that thumbnail automatically. If you click it you can see the whole image.

Yeah, was just being a dork. This is what passes for human interaction for me. Big shoes for you.