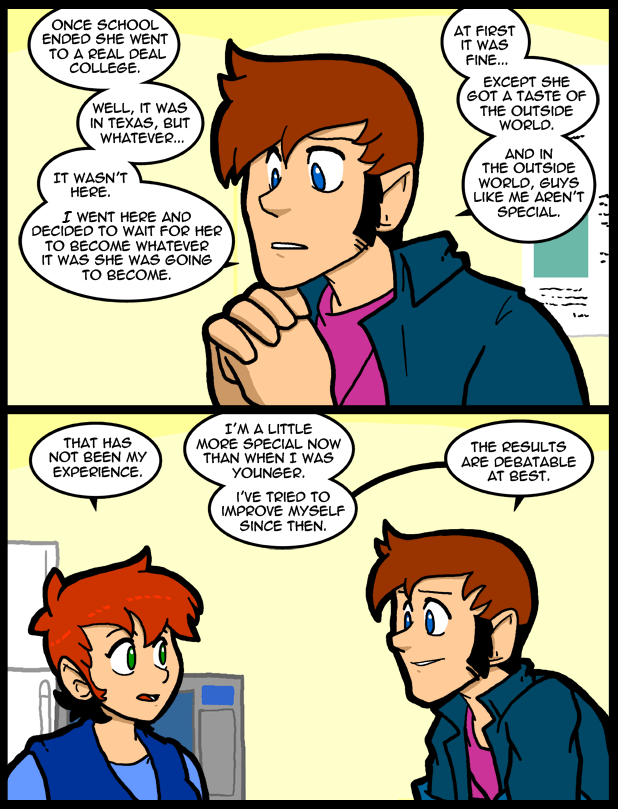 Tonight is homework night. The teen has a huge mound of it and I am cartooning and helping simultaneously. I’m not sure which thing is suffering more. We started with word maps, then moved on to completing sentences. Now it’s choosing antonyms. After that there’s science and math.

Anyway… Today I picked up Skylanders Swap Force, which pretty much kills out any other purchases for a month. I haven’t played it yet, but I pre ordered the dark version from Gamestop so I had to pick it up. The figures look cool at least. The magnets that hold the Swap Force guys together are strong enough to feel just right. I don’t know why I didn’t expect them to have magnets, but it makes perfect sense now. They had a ton of other figures, but I couldn’t get them all. Because that would be insane. Less insane than getting the Disney equivalent figures, but insane none the less. My set came with a free lightcore Hex as a preorder bonus, and I did get Star Strike and Roller Brawl because they seemed cool.

I need to get back to helping but, as I said on my tumblr, if anyone has any suggestions for Halloween costume warmup sketches I’m open to them. The post is here if you want to see the Thomas as Kamina I did. (and didn’t notice it in the twitter feed…)

Sometimes, you find out you’re a dime a dozen.

And other times you’re a diamond in the rough.

You’re always more special to the one person who will say this than you ever seem to yourself.

(I’ve never seen myself as anything but ordinary or, worse, a blight on the face of the planet. I have someone trying to convince me otherwise though.)

If you have someone trying to convince you otherwise, I feel that that itself makes you pretty special. With all the people in the world, they could focus their energy on anyone, but they chose you.

I disagree. I’m unique, and an acquired taste………….which no-one has any interest in acquiring. Kind of like a fungus.

Carol’s hair is so cute messy. Anywho, Im not sure youve ever mentioned what “The Teen” thinks of your comic, or if she even cares about cartoon anything to begin with.

It doesn’t interest her particularly. Most people can’t get in to the story until they’ve had at least one real job it seems like. Also, there’s not enough vampire romance to keep her attention.

Ah I see. Theres something to be said about showing your art to someone in person as to showing it over the internet. She must like your art style or a particular character design if not the content?

Not that I’m aware of.

A pity, truly. Thanks for showing us your work though, we appreciate it. :)

I’m sixteen and never had a job, but this is one of my top three webcomics. You can associate the characters with anywhere. I personally relate it to my school life, but I’m usually like a mix of Nina, Brooksie, and Carol in man form.

You might be the most interesting man in the world. XD I’m glad to know I can reach the young people too. Hopefully you will be prepared for work while also being entertained. X3

I’ve got two costumes that I think might work… Edward Elric for Ed and Jim Raynor for John. Could be fun, no?

Ed’s certainly got the height for it. The name even lines up too, as a nice bonus!

I don’t know if you’ve ever played .hack//g.u., but Thomas in any of haseo’s outfits would be awesome. Also carol as alkaid. Nina as atoli, and for some strange reason john stuck.as endrance. I could also see Megaman bosses. Nina takes centuarman (conceptualized as a female) Thomas as rocky, Ed gets timeman or heatman, chargeman, one of the short ones, carol gets splash woman (and threatens death), and john gets hardman, because it’d be funny to see his reaction to the name.

You’ll notice i always seem to do sets in costumes, i don’t really know why i think in sets like this. Also it’s nice hearing more about Thomas, I’d like more on carol too!

*Sigh* Texas has many fine, world class institutions of higher learning, no need to be snarky Blackwell.

I too hope Ed finally does something about his infatuation with Nina, and I really can’t wait to see how all this turns out.

Thank you, the school in Texas that I’m going to is ranked 13th in the nation for the major I’m in.

I’m not sure I’ll ever know how my mind sometimes ties thoughts together. The point being, I think “than” is actually the proper use in this case. I’ve never been the best grammarer, but I think it’s called an interrupted clause or something.

Hell if I know.

“THAN” introduces comparison and is the right word to use in this situation, no doubt.

Or; “I’m a little more special now THAN I was THEN”

Ugh, I dunno how long I’ll be able to keep up the Skylanders thing. My wife and I went whole-hog into the last two, and I wasn’t sure about this one. Then I SAW them in the store…started looking up what figures are out and what the variants are…*sigh*. Long story short I’ve got Swap Force now – same Dark set as you, since it seemed to make sense (since my wife and I play it together it makes sense to get doubles if a character is cool enough, but we like them to be different somehow; hence the variants or whatever).

Haven’t even touched the Disney one yet, though it interests me…

That ad for YChan… should not be there. NSFW is one thing, full frontal nudity is another. That is more than any person should ever see without fair warning.

I guess I must be jaded or something. I’ve barely even noticed it the whole time it’s been running.

I only saw it once. It kind of put me off with the animal features.
I mean, most dogs I see are naked. Giving them human features is just kind of… counter-intuitive?
Yes. I’m aware of furries. Not my thing.

Phillip M. Jackson I think, has a character on DeviantArt called Bridget-Demon Kicker. Carol would be amazing as her. Maybe you two could converse (and let me know if her character has a comic anywhere).

I predict Carol is going to make her boy feel special now. He will get major fuzzy feelings.

I don’t know where mine went—-AH! I remember it now, though. Reggie as Loki. :D

You still haven’t fixed that “then” that should be a “than”.

I haven’t fixed the page from Monday either. I had to go to the dentist and mind the teen.

Okay. I’m going to say it. (Directed at Thomas. Not responsible for collateral damage.)
Taste of the outside world…
She (presumably) went to Austin, TX. It’s nice, but it’s not as “outside world” as you’d think. Hell, I lived in Japan before. One of the most unexpected take-aways? I was amazed at how NOT foreign it seemed to be.
They have grass just like we do. They keep dogs just like we do. (The most popular dogs are a different breed.) They even have McDonald’s!
Take your eyes off of the things other people do, and just do something that only you can do. It DOES exist. Just go for it.

Yeah, Austin, Texas is definitely more ‘outside world’ than western Kansas. I can personally confirm this.