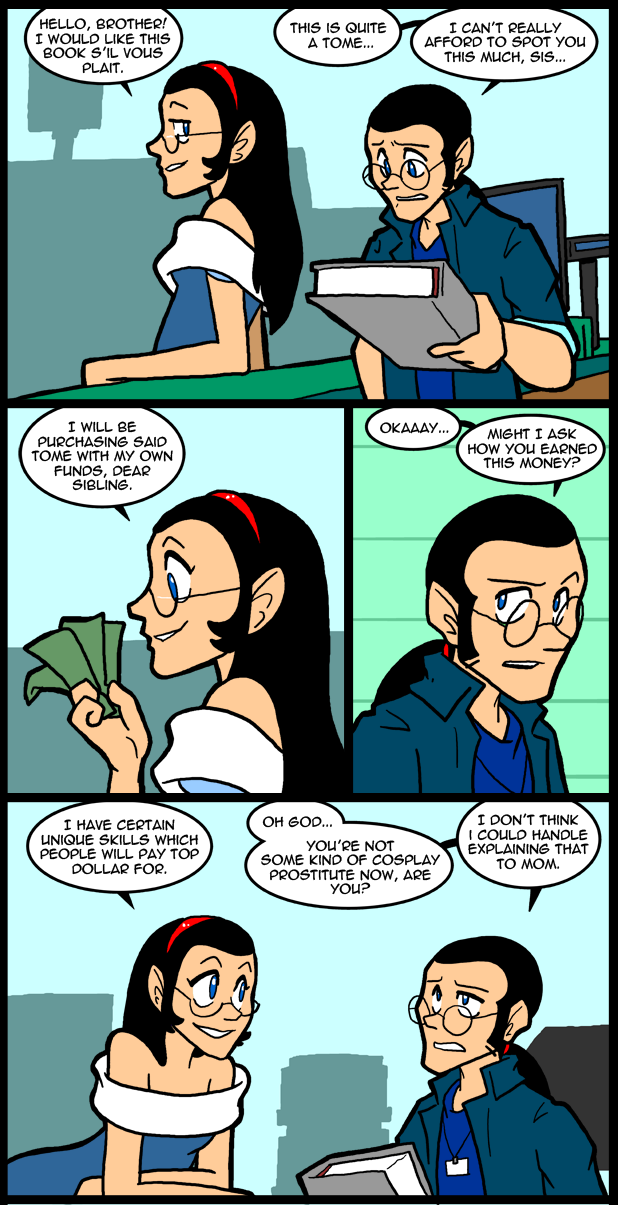 I think the actual shorthand for cosplay prostitute should be cosprost, or cospros, but I’ll let the natural evolution of language decide.

I really enjoy writing these interactions between Jess and Ed. She has a strange way of looking out for her brother that is fairly adversarial. Whereas he coddles her quite a bit. In spite of her doing things that really mess with his head he is still very protective of her. Isn’t it strange how the heart works?

Just finished watching Iron Man 3. I liked it. It is, as many have said, better than 2. Although, I still liked 2. It also went a very different direction from what I expected, but I liked the surprise. I haven’t watched the bonus features. I seem to recall their being a short film mentioned on the box? We’ll check that out later.

I watched that SHEILD series pilot. It was okay. Kind of Torchwood, minus the British need to kill every character every episode. Did I talk about this already? Anyway, check it out if you have a television and like Marvel movies.

So… You guys who liked the story, would you also like some comics of it? I mean extra stories that are in comic form. Like, if I did a Kickstarter, or whatever, would you want that as an extra thing? I honestly don’t know how to make a book or kick a start, or what have you. Like most things I’m just winging it here. Anyway, I actually have some partial comic scripts written, in addition to parts of the next bit… chapter… I am very strange about how things are parts of things, I just realized.

Well, whatever, let me know. The first idea I have is a Twig centric story that takes place between the end of the story and the next part. In case you were curious.

I’d fund a kickstarter for a PDF copy of a book! And as for extra things, fanservice is always appreciated :P

Also yes! Finally someone who liked Iron Man 3(lots of people I know didn’t for some reason ._. )

Lastly, Cospitute is my contribution to the butchering of the English language!

I liked Iron Man 3 don’t know why anyone would be complaining, it was awesome!
Yes, please! on the comic for the fiction!
I think it would be “Costitute” but that is just me.

I also enjoyed Iron Man 3, and vote for Cos-titute.

How could anyone hate Iron Man? Those movies are as awesome as they are hilarious! Granted I don’t get to see new movies as often as most other people, so I carefully select movies when I DO get a chance. The Iron Man movies were great, and I’m not even a comic book guy. (More of an anime otaku. Japanese comics over American ones, I guess.)

You know what I keep thinking to myself? …. Where is my sandwich?

While I didn’t hate Iron Man 3, I did have problems with the storyline itself (namely the issue with the Mandarin and that other guy who was the real villain.) It just felt like a waste of a character to me. That, and War Machine (or The Iron Patriot) really wasn’t useful in this movie. It was around for only, what, 10mins of useful screen time? And even then, the biggest plot twist around it was that the bad guys got to use it more than the actual pilot.

I will simply say you are far more generous to Iron man 3 than I was.

It’s not butchering, it’s evolution. Language is a living thing, always growing and changing. It reflects the reality of our culture.

I am pretty broke most of the time, but I would definitely chip in a couple of bucks for a project of yours. :) I really enjoyed the story, I think some additions to it would be great fun.

Cosprostitute? That flows off the tongue considerably well.
Try saying it. Cosprostitute.

In any case, liking the dynamic- and wondering which book that is. It’s probably not the obvious- Constance/Dawn’s- so I’m curious.

Cosprostitute is a mouthful, Cosprotute as a word flows much better.

So that’s where Jess got off too after molesting Jo.

I think we have a winner here. I second costitute. Also submit that i am a costitute. Or… Some kind of cosplay pimp. Cos-pimp?

@crave while we’re talking about costitution, are the nametags in the character’s page correct for each? I plan to whore my cosplay skills to make a bf live action team pic, i wouldn’t want the nametags to be wrong. Also, has the name of the store been said? I feel like it has been but i can’t seem to remember when.

Megatainment if I remember right …

That’s right. Wow i feel dumb for forgetting that. I knew it was megasomething, i kept thinking megagamers but that’s the store piro and Erika work at in megatokyo. Thanks fuga.

I wasn’t aware that that was a ‘thing’, but nothing really surprises me anymore.

Crave, Ummm… I am kinda nervous about asking this, but I would PAY YOU MONEY if you let me do just one comic for you for the story you wrote!

You wouldn’t even have to use it… I’ve done a few comics on my own for Exalted games, but I never shown anyone before, and I’d love to do some for you…

Granted, we are like dirt poor so I couldn’t pay you a lot, but it would be MEGA cool… please?

How about we work out another deal? I’m not comfortable with this reverse payment idea. X3

I am still waiting to find a magical link that will take me to said story all on one page. Tales were told of such a thing, but none have ever seen it.

Under the logo, there’s a tab marked fiction. That’s the one you want.

I would love to read a comic based on you story!

I’ll vote for Cospro. Very simple and pro is another accepted term.

Yes! I’d love to see the fiction either in book or comic format (or maybe even a hybrid version? Mainly book, with pictures for some of the best stuff?)!

For the people who’s lives centered around video games and nothing else to their detriment (social and mental) we started using ‘wii-tards.’

Language evolution is a B.S. excuse to misspell words, Garrett.

President Andrew Jackson once remarked that he had no respect for a man who could only find one way to spell a word. :)

I personally like Cospros, and yes, I would certainly toss money at a kickstarter project for that story! I believe that Fry said it best. “Shut up and take my money!”

I liked the story quite a bit, in spite of early criticism. However, I have yet to kick a starter (except in my Ford Ranger), so I doubt I’ll be jumping on with one this time.

Also, the laughter at Ed’s reaction to Jess’s explanation for having her own money. It nearly killed me. I may sue.

Personally, I always thought the best word for such a wanton was cospay. For all of me, costitute works, too.

I would certainly buck up for a members-only Kickstarter comic. PDF is fine — they don’t get quite as dog-eared on my tablet…

While “cospay” sounds very apt, I still find the portmanteau of “costitute” to be more elegant.

hmm – sounds like a job for Superenglishnerd – anyone know his/her cellphone number or email address?

Cospay i thought was the term for failure cosplayers that buy storebought costumes and attempt to win costume contests with them.

Andrew Jackson was probably a sore loser at Scrabble too. Screw him.

Generally he just killed the other player six moves in.