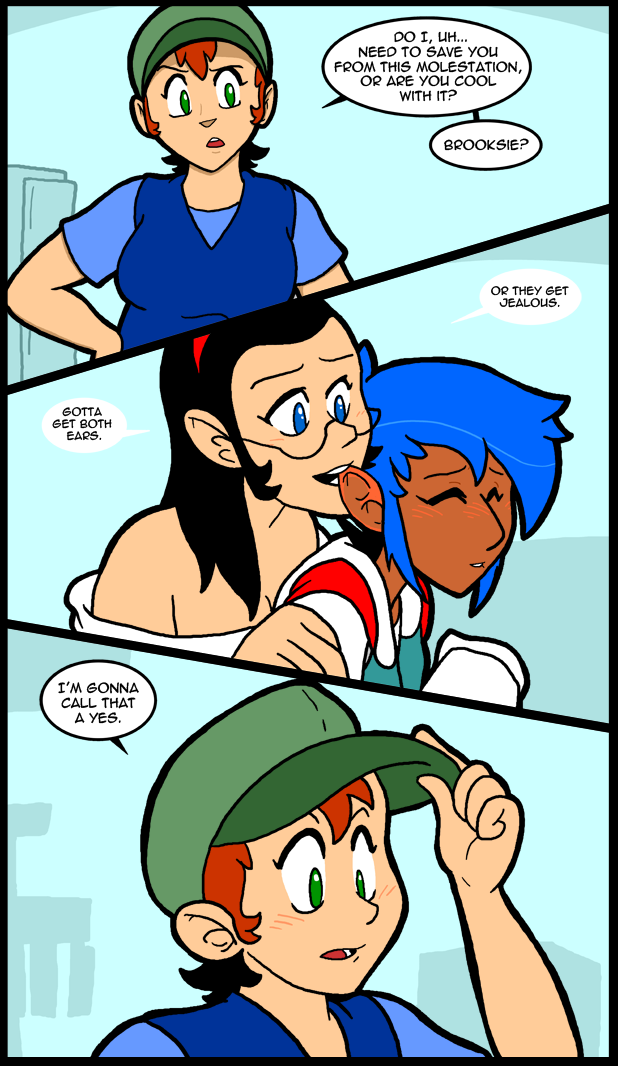 Jess has made a very awkward situation here. One I would probably just quietly walk away from.

So… I really like Legend Of Korra. It’s different in tone, but I don’t have a problem with it. I have to agree that the pacing is pretty fast. It’s a shame they didn’t commit to more episodes from the off so they could stroll along a little. I haven’t finished it yet, but the two villain thing made the story seem a little busy in the later episodes. At the same time, I liked the two factions.

Tenzin was also super cool for being all stuffy, but really a nice man. The flashbacks to the old team Avatar were also nice. It was neat seeing everyone grown up.

The teen wants me to watch a film with her right now. I am literally being whipped. So I have to find a movie to watch so my pain will end.

What the hell is hipster?

Sorry for the randomness, but I get questions like this in my head from time to time. I’ve already read Urban Dictionary’s definition, and ran the search on Google. Right now, I’m pretty much looking for opinions. Right or wrong answers do not exist to satisfy me in this case.

Oh, and let’s just get this out of the way. I already know I wouldn’t know about it. It’s why I’m asking!

I’ve been told it’s someone who liked everything before anyone else thought it was cool, and therefore feels superior for having liked it first. I might be wrong though.

For me at least, the term hipster no longer has evolved to a suffix which indicates that a particular person has little to no interest in the ‘mainstream’ version of something eg: a food-hipster is someone who prefers unusual dishes and avoids consuming things like standard fastfood.

The hipster was into whatever you’re into before you were into it, and dropped it like a moldy Rambutan before you found it.

The hipster is cooler than thou.

Foodies could be hipsters. But they’re not.

Whatever you’re listening to, the hipster got bored with last year.

People who say, “That is so last year” are not hipsters. Hipsters haven’t said that since last year.

simply put..at least with hipsters I have met a smelly dick bag.

Korra is more of a darker tone, with someone who doesn’t have all the answers like Aang did. What’s worse is that she is easily misled and can be goaded into doing things that may be rash or problematic. But Her finding the answers is what makes Korra such a joy to watch. You don’t entirely know who the real enemy is, or how the problem will be represented until it is.

I’vs really enjoyed LoK as well. It’s part of a trend I’ve noticed lately where cartoons are catering more to more mature audiences. See Transformers Prime and, to a lesser extent, Young Justice for more of what I’m talking about. Not just darker subjects, but also better developed and more flawed characters too.

Has everyone forgotten Teen Titans and Robin’s eventual near-turning to the darkside? Or Raven completely losing herself? Or Star-Fire learning both sides of humanity?

And on the subject of the Comic, I ship this more and more every time I see it. For some reason it just works oh so well.

In my case, there’s about a 15-year block of TV I know very little about.

I was very close to never finding out about Firefly.

Teen Titans would definitely be another example, a forerunner of the trend, if you will. Such examples have been getting more and more common within the last few years, and arguably darker. Transformers Prime, for example, brings us electroshock torture of a federal agent within the first few episodes of season 1.

Well, Carol answered her own question… with a Mathematician’s Answer.

That’s what bugs me. She asked two questions, and the questions she asked would be two separate answers if she just got a one-word answer.

The only thing about this that isn’t confusing to her is that she knows which questions she chose her answer for. The rest of us have to derive it.

I guess ‘yes’ applies to both of the above in this case, it does make sense that way.

First: I feel I must say that the darker tone is implied by the slightly different art style, which involves a lot less light and thinner linework. The art itself displays the new direction.

Second: Brooksie looks like she’s enjoying that. I’m glad. I probably don’t have the ability to shove Jess into a rock tumbler.

Third: the image of being literally whipped did not need to enter my head.

One would hope that Brooksie is enjoying what Jess is doing. If not, it would actually be considered non-criminal sexual contact which can get you fired from many businesses. Someone as shy as Brooksie might not feel able to stand up for themselves and object, so if you see conduct like this you better make sure the recipient is ok with it or you will be kicking yourself later for failing to intervene. To Carol’s credit, she did ask Brooksie if she was ok with it and one would assume that since she is right there and knows Brooksie well that she is correctly interpreting the body language.

Also Jess doesn’t work there, so she has no fucks to give.

Just because somebody? body responds in an appropriate way to certain stimuli, does not mean that their mind is OK with that stimuli. It can be helpful to call a break to the activity. If the target of the stimulus objects to the break, it’s fine.

Carol might know Brooksie well enough to tell, or she might not. One of the times when I was receiving unwanted stimulus and unfortunately having my body respond regardless, my *brother* decided that it looked like I was enjoying myself and abandoned me to my fate. Fortunately, the person providing the unwanted stimulus was not imprudent enough to go into territory the local court at that time would have recognized as rape, and fortunately, I’m a guy and so not socialized to make rape as much more traumatic than it fundamentally is as women are.

Jo’s bushing so hard that her ears are turning red.

This is more for me than it is you. Thank goodness the next comic is up and it’s unlikely anyone will ever see it.

I just kept thinking of bushings. You know, little rubber or soft metal barriers between two metal parts that keep the metal from wearing out too quickly.

I have been on both sides of the Brooksie/Jess situation here (Down to balancing ears. :) ) I don’t think Brooksie looks like she is complaining, nor does she seem to have any illusions about Jess (Whom I personally don’t have the hate for some people do. People like her are often intense, but can also be the most loyal people around. I think if she had ANY CLUE about the dating couple she wouldn’t actually be saying the things she is. Teasing is teasing!)

And lets be honest, if anyone deserves a sweet and fun fling, it is Brooksie, and she might surprise everyone with her ability to corral someone like Jess!

In other news, hey Crave! The fanart’s up!

I pretty sure why the pacing is fast in the 1st season of Korra is because originally they were only going to do 2, short, seasons.

Originally they were only going to do one season, actually.

GAH! Why did you have to mention Legend of Korra?! I missed season two’s first episode(s?)!!
Back from a month of unpaid internet… so outta the loop. I’ve missed my adventure time, my Korra, my friends, my minecraft, my god, my life, my cabbages… and so many other my’s!!

if you really like avatar, i would recommend reading the comic books. they explore what happens to the characters after the end of the war

Aw, I want Brookies hair to look messy again, it looked really cute in the comic before this one. Nibbling the tops of the ears would feel weird to me, Id rather have my lobes nibbled…um…moving on.

Just a quick question, I love all of the character portraits for the alternate story, but do you have any images of the dryad?

I haven’t drawn her, or Herrin at this point.

Okay, Jess made Jo blush, even with her dark complexion. But making Carol blush — that’s an accomplishment.