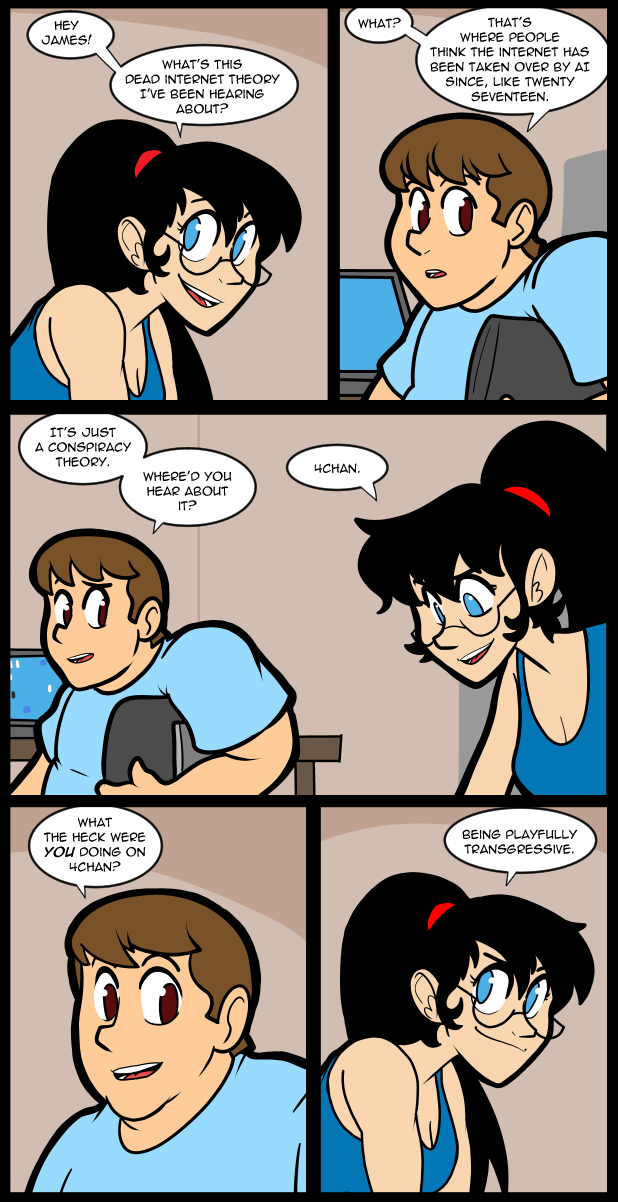 Normally I’d make up a fake soundalike name for 4chan just to keep one foot out of the real world. Unfortunately 4chan is so infamous that every permutation you can think of for it has been claimed by someone somewhere. Rather than risk people searching for an even more dangerous version of the site I decided to just use the actual name. Honestly, by the standards of the old internet 4chan is pretty tame. It’s only in the scrubbed and censored version of the modern internet that makes it look much more horrible than it really is. Which is not to say it isn’t horrible. It’s just horrible in a sincere, generally puckish, way rather than the horribleness you see on twitter. In any case it’s mostly a way to get the concept of the DIT on to the page anyway.

The internet at large may be run by AI, but my comic is not. This being the case please consider supporting my efforts via the services listed above. It’s still a ways off before I can give creation of this comic over to our machine overlords. So I need food and entertainment.

I just tried searching for 42069chan, and it doesn’t seem to exist. So that one would probably have been safe. Nonetheless, I’m actually okay with the idea of 4chan becoming so irrepressibly eldritch that it exists with the same name even in realities that have parody names for every other public entity.

Of course, there’s also the possibility that that name would have been claimed in the future.

I want Jess and James to have sex.

Also Brooksie and everyone.

This man bravely speaks for all of us. <3

I don’t suppose Ed and Jessie are related to the Sorricks or Royers? She looks like someone I might see at a family reunion in this page.

Its not a dead meme. Its the plot of Metal Gear Solid 2.

I not only admit to being a former /b/tard, but also to enjoying my time therein.

It was one of the first places where you could truly communicate in meme.

One of my favorite things to do every so often was post a still from that scene in Jurassic Park where Nedry is yelling at the outdoor restaurant. The accompanying text would be “Dodgson. Dodgson! WE’VE GOT DODGSON HERE!!”

Then I would see how long it would take for someone to respond “Nobody cares.” It never took more than a few minutes.

And then people would start quoting other lines. It was great fun.

I have been hearing about how 4chan is an awful, awful place to be almost since it spawned in 2003. I have never heard one good thing about it in nearly two decades, not once.
Consequently, I have never felt compelled to lookup a post, follow a link to it, much less make an account there.
I see no reason to change that.

Filter is working as intended

4Chan, and its /b/ (random) board in particular, is about as close as you can get to looking into the soul of the Internet. With all of its glory. And all of its horrors.

What does DIT stand for?

Thank you for answering the question! Now I feel kinda stupid for not figuring it out myself lol.

“Being playfully transgressive” is the most Jess line ever.

That *is* why one goes to 4Chan. The only reason I can think of, actually.

You forgot “to be subtly indoctrinated into far-right ideology without realizing it”.

Only the weakest of minds fall prey to that kind of nonsense. The ones who were already useless to the world.

Sadly, I’m not entirely sure about that. Over the last several years, I’ve watched in horror as people I’d been interacting with for years, and always regarded as reasonably bright and sane, went down some very disturbing rabbit holes. I think some of it was just people spending a little too much time in echo chambers where bad ideas got reinforced instead of debated and rebutted. Once you start to buy in, it’s easy to slip a little further, and the further you slip, the faster you go, until you’re a card-carrying member of the tinfoil brigade. (It’s interesting to note that most conspiracy true believers embrace more than one theory, sometimes even staunchly believing in two theories that contradict each other.)

Looks like we can confirm the ol’ sliding timescale has slid. The comic started in 2007 in our universe, but given the amount of time observed in-universe, we can probably assume that strip number 1 now took place in at least 2017, if not later, by this comic, since 2017 is now implied as being in the past.

These are not presented as part of the comic timeline. They are just filler I’m making while my family implodes and dies.