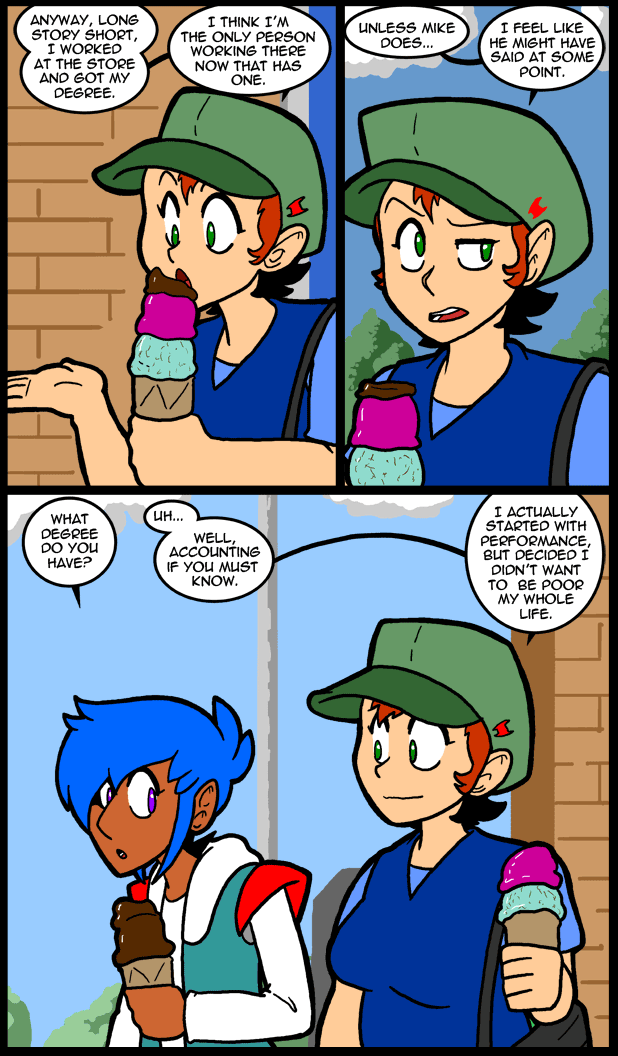 I got almost nothing written today, but I guess I’ll post what I have anyway. The update for my text program took forever.

“I’ll have to teach you the art of not being seen.” Julius smiled.

“I would like that very much.” Grinned Alina. “But from what Niona tells me I’d be better off letting your cat teach me”

“Yes, in that case the student has surpassed the master…” He sighed with a smile.

“What is she to you?” Asked Alina.

“Family.” Julius replied. “Having lost our originals we made out own.”

“As I’m sure you’re aware,” He began. “There are settlements all around the wall of the capital. Really just the city spilling out of its border. I was an apprentice to a locksmith. While the master was out on more complicated jobs I took care of day to day problems. On the day of the siege I was on the very outskirts, installing locks for a new shop. A weaponsmith named Burns was the client. He was an ex soldier. Nearly seventy, but built like an oak. He pestered me all day with small talk. I think he was nervous about starting a new business. Just talking to hear himself talk. I listened to his whole life story. Really it was the story of his whole family. Right down to his granddaughter who was studying magic. If it had been any other day I wouldn’t even be able to tell you what he looked like now… but it’s all burned into my memory.
I was try my hardest to escape when his wife and granddaughter came running up the street.

“I was try my hardest to escape when his wife and granddaughter came running up the street.”

I’m sorry, but could that be reworded, please? I get the gist of the comment, but for the life of me I can’t work out what the first words were intended to be…

As for the comic; I’ve been wondering about their qualifications for a while now, so this clears that up for me. Thanks. :)

Brilliant comic, equally awesome story. Thanks for keeping us all entertained, we appreciate it!

I believe they were supposed to be “I was trying”. He just forgot a tense modifier. Common mistake.

I will solder so many things!

Degrees are nice… IF you get a well paying job from it, otherwise all you have to show for it is a big-ass debt.

Hey, could someone link the first page of the text story? I want to read it, but it’s annoying to go back through the archives to find the first one…

Thanks brah!
I’m an idiot for not seeing that sooner…

Trying… of course it is. Now that I see it, I have no idea how I could have missed it! Thanks Mr. Bulbmin.

But of course. That’s what I do.

Those faces are so awesome.

Everytime Julius talks about “the art of not being seen” I keep thinking of this:

Yea, that was my first thought as well.

Okay, I need to ask, what is a degree in “Performance”? Also, shouldn’t she have chocolate (or whatever flavour that is) around her mouth? Nice touch having it slowly disappear from panel to panel, by the way.

Jesus, do you think she’s some kind of animal? She can eat ice cream without it getting smeared all over her face.

Performance degrees cover all the performing arts. Anything you’d do on a stage.

Nooooo! After weeks of passive reading, I am caught up!

Bleh…didn’t expect to be caught up after a day or so of reading, but damn fine storyline you have going on here. I haven’t been paying attention to the comments as i’ve been reading the archive so i don’t know if it’s been said or not……but….

is it just me or does Nina look like a human version of Gadget from Rescue Rangers….may or may not be intentional, either way, i love it…..

XD That’s a new one on me, but if it enhances your experience you just go ahead on thinking that. Thanks for giving the comic a try.

Mike more than likely has one, just not in the business management line. It’s the reason he’s sticking with the crap job, because he has a large student loan to pay off on mostly useless knowledge.

Carol was smart in getting something that pertained to the workforce, most of us who decide to finish out after joining the workforce do. We’ve developed BS detectors and lost some of that youthful air-castle building that your average college induction depends on to push you into their unfilled slots.

You can’t eat performance art, unless you’re obsessive, quaintly oddball and have an innate ability to network with the right people who are looking for your brand…

Figure out what you want to do in High School, get your AS, it’s a lot cheaper. Get work in that line, decide if you really like it and go suck on the BS if it will make you more money. Going to college to figure out what you’re going to do later just dooms you to a mountain of debt and you end up like my friend, trying to be an account manager in a dead-end job with no drive because it’s not really what inspires you to feel alive. Debt Zombie is not a career path you want to pursue.

Though I feel sorry for actors at the same time.