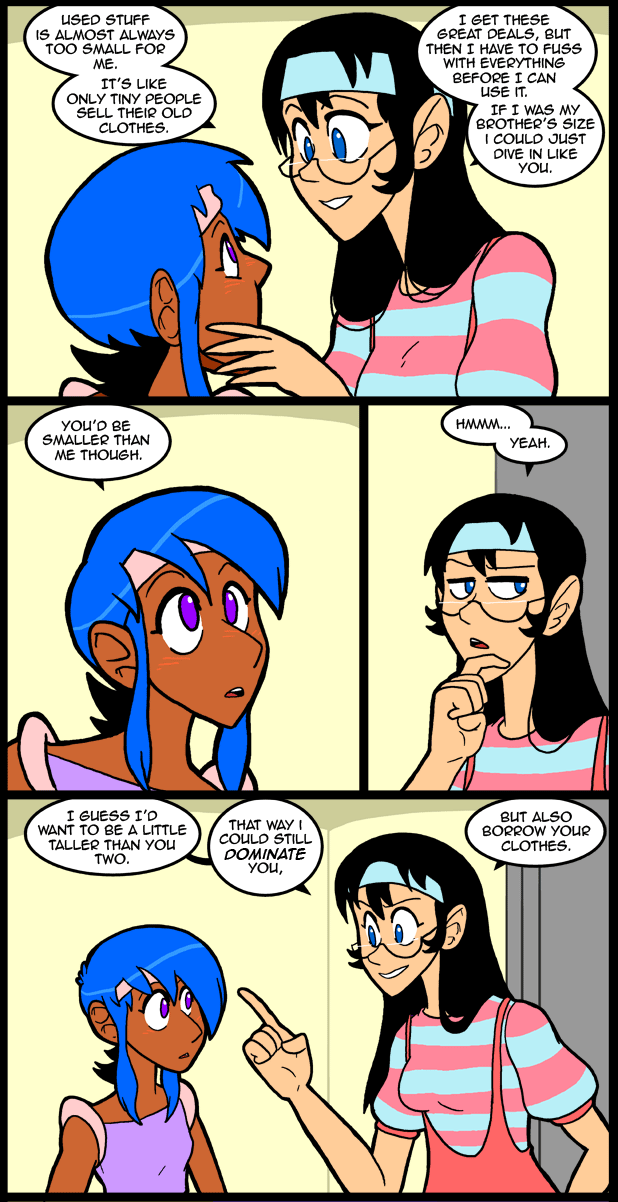 This flows better if you go back 3 pages and read the last Jo/Jess page. I could have just had it be the page after that, but I decided to alternate weeks of these two and stuff at the store. Sot of an A/B story kind of thing. The breaks aren’t perfect though. Then again it’s not like you forgot what was happening after 7 days anyway. In any case i might have done it a different way. I went with this way, but that’s the nuts and bolts of it.

They updated Skylanders Lost islands and fixed the missing player glitch. So that’s cool. The patch note said it wouldn’t happen again. I’ve got most of the Skylanders leveled to a point that I can set them to tasks and not have to check on them every two seconds. I’ve also done the same in ponyville. I have enough shops with long reload times that I can set them and forget them. I haven’t been able to accrue enough gold in Skylanders to purchase another island. I’m not sure if that’s just the nature of play, or my poor asset management. In Ponyville I’ve managed to get several ponies and uncover all but one elemental altar. Unfortunately the stuff you use to unlock them gets rarer and rarer by type. Also I’ve hit the first paywall block in the “story mode” I can’t advance past a certain point without buying Rarity. Which is fine, I guess. I can still get non dollar ponies and buy land upgrades. Since I went directly to the gates my town looks like the city planner had a seizure. It will take a lot of time and bits to fill in the other areas.

Skylanders Battle grounds was also released yesterday, or whenever. In any case I saw that it existed. You actually have to pay $7 or so for it, but it’s more of an adventure game rather than a zen garden. You can buy gems and coins, but so far it looks like you don’t really need to. As near as I can tell you can actually unlock all upgrades through gameplay. The in app purchases appear to be for the impatient. You are, unfortunately forced to buy one skylander in the tutorial level. On the bright side, if you have that one you get those gems back if you enter in the online code they come with. You can also use the bluetooth portal of power, but I don’t have one. It’s kind of a shame that there’s no adapter for existing portals since I have 3 of the damn things. Only 2 work, but that’s a whole other thing…
The game itself kind of remings me of Godzilla for the NES. You wander around a grid either avoiding or engaging groups of enemies. When you agrieve them you are taken to a battleground based on the terrain they are standing on. As far as I can tell the terrain has no effect on stats. They’re just for pretties. You tap and drag to give your skylanders orders. Each one also has potentially 2 slots for special attacks and powers. They aren’t unique to each skylander. There appears to have been a limited pool from which the cast was blessed. In any case, enemies attack you in various ways and you must manage your players such that they are not rendered unconsious. If a team member is incapacitated you can summon a random support character to take their place. As near as I can tell you can do this until you run out of gold. I assume after that your game ends in some way. Characters advance only through upgrading their special powers. Their base stats appear to be whatever they start with forever. It’s not explicitly stated but there are basically 2 classes in the game: ranged and close combat. Generally ranged skylanders are set up as support characters. Their powers allow the brawlers to keep evil at bay long enough to win each round. Brawlers have support powers too, but they tend to be geared toward ending conflict quickly. How you pair up a team is actually very important as things progress. Two brawlers run the risk of getting worn down by area of effect attacks whereas two gunners get overrun very quickly by groups. They would be more effective if the camera wasn’t so close, but there’s no way to pan out other than making the team walk away from each other. That’s my biggest complaint about the game. The camera is hellbent on being as close to your skylanders as it can ALL THE TIME. Even on the overworld. You can pan out on the overworld, but not so much as to let you plan very far in advance. There’s also no way to scroll around the map as far as I can tell. I feel like it’s the kind of thing they could fix with a patch though. I might go on itunes and mention it casually in a review.

The game is actually a lot of fun and the controls are pretty precise for touch controls. Things get a little messy when everything gets bunched up, but overall it’s not an issue. Makes me thing a tactical style game would work really well for the iOS. Maybe one where you could take in a bunch of guys at a time.

You are killing me with this.

I’ve been playing Lego Lord of the Rings for 2 days. It’s blowing my freaking mind. It’s like Lego Star Wars and Champions of Norrath had a baby together. I swear to God, this is what I always wanted the Lego LOTR games to be ever since I got that first PS2 Star Wars game years and years ago…
All your video game talking made me think about it.

Holy crap it’s awesome. So much!

I’ve never been able to get into Lego games. Is this the one that I will actually enjoy? Can I get a longer review?

It’s like an old school dungeon-crawl with fun LEGO bits and puzzles thrown in. The system for 2-player mode is freaking brilliant. It’s amazing. Like, Gandalf is on one half of the screen fighting the Balrog while the hobbits are on another screen doing something else. It’s freaking ridiculous.
It’s a lot of the same old LEGO stuff (building things, switching characters, some characters have needed abilities) but you also have quests and just that old-school RPG feel to it. The first thing that you do is a freaking orc battle. You’re just dropped into a giant war and have to go around killing orcs for a bit– kind of like Romance of the 12 Kingdoms or something (I can’t remember if that’s what those games are called). I was in love with it from there.
It’s got a lot of the “Solve this Lego puzzle or be stuck here forevers” stuff in it. That always throws me. It’s always something obvious but they take me forever sometimes. They are just not intuitive for me.
This game is more fun than many previous games if only for the fact that the story makes some sense. Pirates was fun. I love Pirates. But you don’t know why you’re doing stuff half the time. This game has brilliantly blended the dialogue from the movies with the Lego cut scenes. It’s hilarious to see some of the things they come up with for high-drama situations (Boromir’s death comes to mind) interspersing the serious dialogue with comedic noises and silly things in the background (Legolas, for instance, sees a new bow. He doesn’t GET the new bow, only motions to it to let them know he wants it. They never show him getting it, yet when they’re rowing away in the canoes, in the background, you see him throw something in the water that is distinctly bow shaped. He threw away his old bow. Presumably, because he’s replaced it with the shiny new mithril one considering that he’s grinning like an idiot. It’s really subtle and really silly.).
If you haven’t enjoyed the older games, this one might be more for you because of all the things they’ve added. There are quests and you can build things like armor and you can equip items to people with their backpacks.
Honestly, if you don’t like the older Lego games I wonder which ones you’ve played. The first Indiana Jones one is so damn boring. It was a huge disappointment. The second one is better. The Harry Potter games are a disappointment as well. They’re very redundant. You’d think they’d be a lot of fun but they’re not. They’re kind of tedious sometimes. We picked up the first one when it came out and played through the first two movies within the week then didn’t touch it until after the second one came out… ^^; We finally finished it and then started playing the second one. I’m still not done with that damned thing. I can’t make myself finish it. It’s just so boring… -_-;
If you didn’t like the Star Wars games, Batman, or the Pirates game, you might not like this one but, given the RPG-ness of it, you could always try it out anyway. It’s kind of a band-aid for me till I can find myself a good RPG that I can local multiplay with.

Starting to ship this… really hoping Brooksie’s Bi or Pan. It would be so cute… and we are never seen as shy in media… its annoying.

I’m starting to ship it too, because it would be super adorable.

You have a thing for dominant women, don’t you?

Thanks so much for the Skylanders: Battlegrounds review. :) I’m penny pinching at the moment and haven’t wanted to shuck out the cash for something that might suck, and most reviews don’t dig into the things I care about, so thanks so much, that rely helped. :)

T^T Finally. Finally someone was helped by one of my reviews. I’m so happy. C: