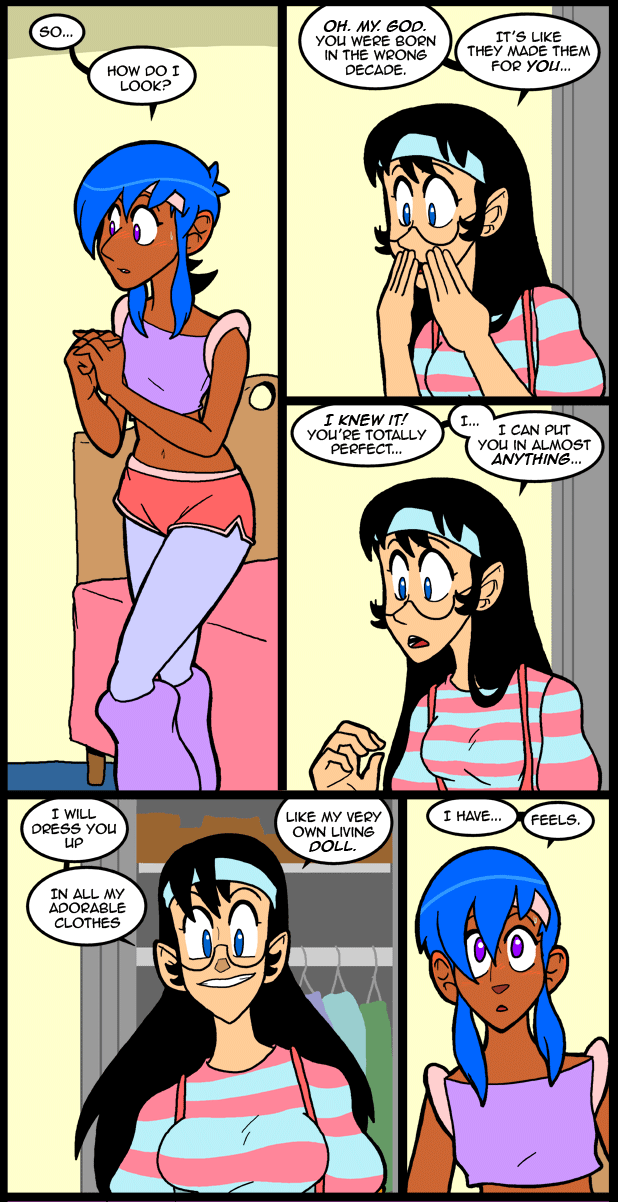 80s era workout gear is basically indefensable stylistically. It’s about a step shy of clown motley. That said, I’m not going to insult your collective intelligence by pretending it isn’t one of my many fetishes. I saw a chance to indulge myself and I took it. I regret NOTHING. Both outfits are references to old cartoons, though slightly altered in some ways. Bonus points for anyone who can name the sources. I like this better than the movie quote thing because you can’t just google this shit. I don’t draw well enough for the image search to work, I bet. XD

I talked myself out of downloading Paper Mario Sticker Star. I just can’t stand the fact that it’s the same price as retail. It’s unconscionable. As much as I’d like to not have the extra mass in my way I just can’t stand it.
If you can also get a code for a free copy the DL version you get a copy of old school Donkey Kong. FFFFFFFFFFFFFFFFFFFFFFFFFFFFFFFFFFFFFFFFUCK! Really? Donkey Kong. That’s your bonus game? Out of the entire library of possible games you choose the oldest lump of turd this side of Pac-Man? It’s like Nintendo just wants to hatefuck everyone who ever paid money for their products. If nothing else they could give people a selection of shitty old games to choose from. That’d at least be like choosing the hand that’s about to slap you. So you could go for the off one.

One of these days they’re gonna send me an email that’s like “Hey, we’re giving all out fans a free secret download for Christmas!” then, on the day they send it out I’ll download it, and it’ll be Startropics. That would actually be so perfectly awful I wouldn’t even feel bad exactly. It would somehow confirm that the universe is, in fact, under the control of a diety with a sense of humor I can understand and get behind.

Now I hope that actually happens. Even if it means having to have Startropics inside my DS for a few moments. Before I transfer it into another memory card, light it on fire, and piss it out.

I didn’t care for Startropics.

I still don’t understand how it is that Nintendo doesn’t have their entire library available for download. When I was working at Gamestop I knew a guy who had every SNES game on his PSP. It seems like if a dude in his basement can figure out how to do that then a company with millions of dollars aught to be able to pull it off too. Even if they intend to ask for absolutely ridiculous amounts of money for them. I should get a spare PSP and see if I can do that. It’s not ideal, but it woudl certainly be better than rebuying my entire library every software cycle for the privilege of playing shit I already own in a way of my choosing.

I’m feeling cranky tonight. Now I will look at Jo in legwarmers and be happy again.

She can have her feels with adorable clothes :3

Seriously….why does Brooksie look good in anything and everything (and likely nothing) she’s like the cutest thing ever drawn

Return the fountain of cute and quotes or be destroyed!

And suddenly I have ‘Let’s get Physical” stuck in my head.

The outfit kinda has a Jetsons feel to me what with those shoulder loop things, actually now that i think of it it reminds me of that girl cat on Heathcliff that was girlfriend to the short mob boss cat with the transforming Cadillac. also girls of most sizes in tight spandex is kinda hot, what with clinging to every curve and crevice.

Startropics was cool to me when i played it, a bit of a pain in the ass at some points but no more than most RPGs of that era.

Also, yeah, like most times; I wanna do very NSFW things to cute adorable brooksie. <..>….Don’t judge me

I think Brooksie is cute too, but I never feel inspired to do NSFW stuff wit’er. Whenever I contemplate John’s and Jo’s -erm- “romantic lives” I can’t help but think of the old “kissing a smoker is like licking an ashtray” analogy. Kills the buzz real fast. I know plenty of great people who smoke – but the smoking kills any potential romantic attraction for me.

I feel about like this for both Brooksie and John…

I also get “The Jetsons” from Brooksie. As for the other outfit, the only thing I can come up with is “The Smurfs.”

*sigh* Lady Ace is now everything I could ever hope for in a girlfriend. I bow to your masterful creation, sir, for I am extremely smitten and I know no woman who ever will show me interest will hold a candle to her. My only hope now is to somehow develop the powers that Gregory West had in the Twilight Zone episode “A World of His Own.”

That is an excellent guess, even though it is wrong. I’m glad someone else remembers Galaxy High. XD

Brooksie looks like one of the chipettes to me.

I was thinking the same thing. And if you don’t mind a little nostalgia story, whenever I think of the chippettes I remember a time, not long ago, when my sister was singing Material Girl. She wasn’t a fan of Madonna when she was famous, and could remember why she knew the song so well. I did. Britney.

Let’s see, we have on our right Aja’s workout gear from Jem and the holograms. But I can’t place Brooksie’s outfit.

Ooh! Ooh! Glitter, the fairy from Kidd Video! And I must say, she certainly does pull off the look well! :3

My first instinct was to say Bubblegum Crisis. My second was to say Kidd Video but I couldn’t remember the name. :/

I just found your comic yesterday and i read through it in pretty much one sitting. It is an incredibly well told story. I love your characters, how they’re drawn, how they act, everything. They just feel like real people and all of them are a lot deeper than you initially think. In the beginning i didn’t really like Reggie because he felt like a 1-dimensional character, but even he had some growth and now feels like a real human being. You somehow manage to take fairly mundane everyday activities and make them interesting through your characters and i don’t think i’ve ever seen anyone do so well at it without it being played for laughs (f.ex. sitcoms). While your comic is very funny and charming, it feels more like a biproduct of the characters interaction than the actual goal of the story, making it feel even more relatable.

This is one of my new favorite webcomics, and one of the best i have ever read, and i read a lot of webcomics.

Yes, I do believe the company of Nintendo wants Kismesiship with all of its fans. Now everything makes sense……forever.

the 80’s workout gear is, to be fair, rather alluring.

I find it adorable and hilarious that Jo is going to be Jess’s doll. She’s like a little kid with a brand new doll.

Makes me think… 80s magical girl? Its just too perfect!