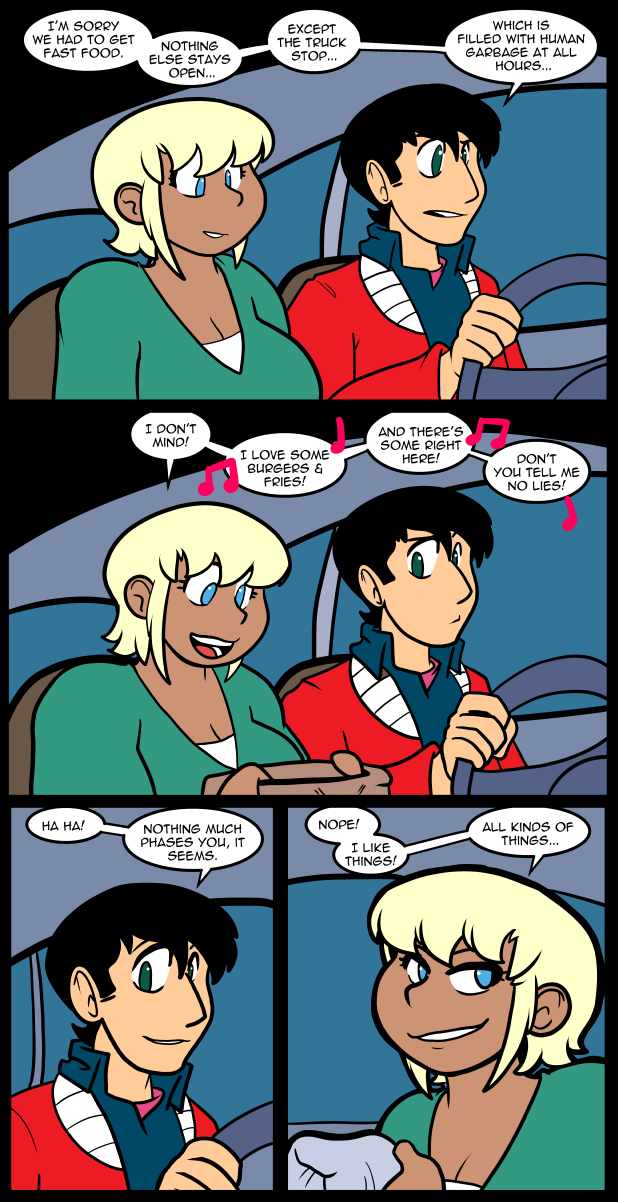 I don’t think I have ever been bewildered more by a statement than “he gave me… nitroglycerin to keep me safe.” Then again, my primary and sole experience with the stuff derives from crash bandicoot. But I am glad to see that your harrowing situation did not result in catastrophic end. You are, if nothing else, a hardy bastard, Mr. Wohlenhaus. Thank you for your continued and inspiring existence.

Also, I’m not sure what kinds of things Maddie purports to like, but I am definitely interested to see where this is going.

In small doses, it dilates blood vessels and thus blood can flow more easily to the heart.

In large doses, it dilates blood vessels violently with lots of fire.

In either case it gets you back on your feet. Just a little faster with the kaboom

Feel your pain honey. Whatever this hell is, it’s awful losing complete control of your body. it’s awful not knowing what can go wrong next.

Glad to have you still with us. Your hospital pic looked “thug” as my students would say. Keep pushing throug man! So many people are grateful for you and your stories.

Nothing wrong with a little confidence.

Well, thank goodness you’re okay. I don’t often comment, but I’ve grown to love this story, and I have a lot of respect for how hard you work even in terrible conditions.

Oh My God! I’m really glad you’re ok, but that must’ve been terrifying!

Good kord, man, the shit you live through… glad you’re still with us.

Jeeze, so that’s what all those tweets were about (such as “being the most metal cartoonist if you draw a page now”). I only saw them in passing while I was at work, but cost & stress aside I’m glad it didn’t turn into anything more severe.

That all said, Maddison went from “yay, food!” to “we gunna fuck” in no time at all :-D

Man. sorry to hear about that, Jackie.
Glad to hear that you’re feeling better.

I’ve tried a few blood pressure medications at low doses to try to control migraines, and a few migraine medications (ergotamine, triptans) that really crank down on the ability of blood vessels to dilate. Those things make it difficult for the body to rev up for increased physical activity, and I’ve had issues ranging from really slow ramp up to what I would consider normal strength and speed, to abnormal weakness, severe cramping, and feeling like a truck ran over me afterwards. (With or without the migraine symptoms as well.) No problems forming memories, though. I feel (some of) your pain, brother.

She may not be super subtle, but she seems honest at least. :)

one of those things starts with an “a.”

I am really sorry to read about your health problems. I wish there was something I could do for you.

As usual I really like this comic. Maddison has really grown on me and I want her to be happy, but I don’t know how well things would work out with her and Reggie. Reggie has grown on me as well and I am well pleased to see him simply smiling in the third panel… not smirking, not smiling in a snarky way, simply having a happy moment.

I hope you feel a lot better and have a bunch of happy moments of your own.

Wow, what a rough day. I hope tomorrow goes much better for you.

I think that Reggie can confidently dismiss any thought that he’s taking advantage of Maddison.

Man, Jackie! I’m really glad they got to you in time before anything bad happened. I really hope you can find a way to fix whatever is going on in your body, and I’ll keep on praying for you that things turn around.

Whatever it is the doctors did, I am (and many other folks are) glad they did it, for sure!

yikes. I’m very glad you’re still alive. That’s terrifying, and … I dunno. Must hit hard, the reminder of what you can’t do.

Glad you’re still with us.

Good lord Jackie that day sounds more fucked up then a soup sandwich. Glad to hear your gonna be all right. Unrelated Madison looks great in that first panel

It really hurts me to hear about all the med issues you keep having. I wish they could find permanent solutions so that you could get better and be in less distress all the damn time.

Keeping my fingers crossed that your health continues to improve.

I realize you have bigger problems at this phase in your life, and I pray your health improves, but Reggie means “fazes”.

Madison is quite a breath of fresh air for this cast. She’s so positive and happy-go-lucky. Contrasts really well with the rest of the cast who is generally pretty cynical.

Damn glad you’re alive, man. When they use nitroglycerin, at least you know they’re not in doubt. (My brother appreciated that when he had a heart attack in May.)

Noticed your tweet about how depression fucks off in the face of mortal peril. I suspect that kind of explains how the old folks survived ice ages and plagues and famines. Maybe the inbuilt paranoia that gets people through daily mortal peril has no outlet in safer times, and depression is a side effect.

So glad you’re safe. I admire the presence of mind you had when it started. I’d have probably tried to make it to the store anyway and nobody would’ve known anything for a while. That autopilot thing happens to me when I get a migraine sometimes, it is pretty weird. Anyway, we’re glad to have you around for a while longer :)

You: Take care of yourself, hombre. :)

So in essence, for many multiple hundreds of dollars the medical profession simply gave you a safe place to sleep it off.

And people ask me why I don’t apply for Obamacare.

In fairness to the doctors, there’s this old maxim: “First, do no harm.” If he had needed emergency surgery or something, they would have given it to him.

I once nearly went into shock and went to the Emergency Room, and all they really did was keep me warm, elevate my legs, and give me anti-pain meds… and keep an eye on me for a while. Other than the anti-pain meds I really didn’t need anything that night. But if my heart had shut down or something they were ready to do whatever. (It turned out that the cause of me going into shock was that my gall bladder had pretty much shut down, and I had to have my gall bladder removed; but once it was diagnosed it wasn’t an emergency. But if it had been an emergency, the hospital staff would have removed my gall bladder that very night, at 3 A.M. if need be.)

So, please don’t blame the doctors for not doing very much.

As for applying for Obamacare: I sincerely hope you do have some kind of insurance. If you don’t have any insurance, see if there is a plan you can afford. It would truly suck to have something really bad happen to you without any insurance to cover you.

The insurance I have doesn’t cost any money, but neither is it recognized by the gov’t. So I still get to pay several thousand a year in extra “taxes”. Still, it’s less than I’d throw down the toilet with the recognized plans.

@Crave:
When You said You reached into the truck for Your surface,
I was thinking “my god, he might be about to die, and he still was trying to update?”

Glad You are still “kicking”.

Jesus, glad you are still safe and sound now. By the way, you reacted quite calmly to the pain, and you took good decisions. As someone has already said, depresion scatters as you become aware of danger, and thus the surprising “cleverness of thinking”, it happens at random in great peril, something I was told when I serviced as a volunteer in the local Red Cross of my town. It´s a psychological defense we have since the days we were cavemen. We should be glad we still have that “safe switch” out of factory (heh), but I dunno if that´s really common. I don´t know if I could have that aplomb if that happened to me.

Been reading you since freshman year, you sir are a genuine part of my coming of age, and a genius; thank you and i’m glad your alright

I might be reading her the wrong way, but- I don’t think Maddie [would really mind] being Reggie’s girl toy.

Not gonna lie, i panicked at the picture on twitter, having followed your blogs here. but i waited to see what you would post here before i started blowing up your twitter like a psychopath.

You are an actual hero for finishing up the comic after that :o I feel privileged to be one of your fans. Look after yourself hun.

Woah first time I read the little description thingy at the bottom in a while and all this shit happens to you- Glad you’re ok dude. Hope we continue to be stuck with you for a long long looooooong time to come. Relating to the comic, I am so Maddison in this page, though hopefully a bit more subtle.

I can’t imagine Maddison and Reggie. Mainly because he Ike smart women. but I can see Reggie growing as a person.

Now Maddy might be eager to jump Reggie, but I think Reggie respects women more than that…unlike Wes.

Our hearts are with you. Feel better!

Aww… Why didn’t Reggie come see us Human Garbage truck drivers out at the truck stop? I’d love to see you draw that.

I’m not sure I could draw that on my best day, let alone now.

I empathize, I’ve been dealing with a weird transient arrhythmia for over a decade now. When it first presented it was some scary world altering shit, and it involved a lot of ambulance rides. Once you make a little peace with it mentally, it will ease off a lot.

Also what’s wrong with truck stops? Some of my favorite hookers work there.

Do you get anxiety attacks? Those can cause similar symptoms.

Crap am I behind.

Human garbage? If it was anyone but Reggie