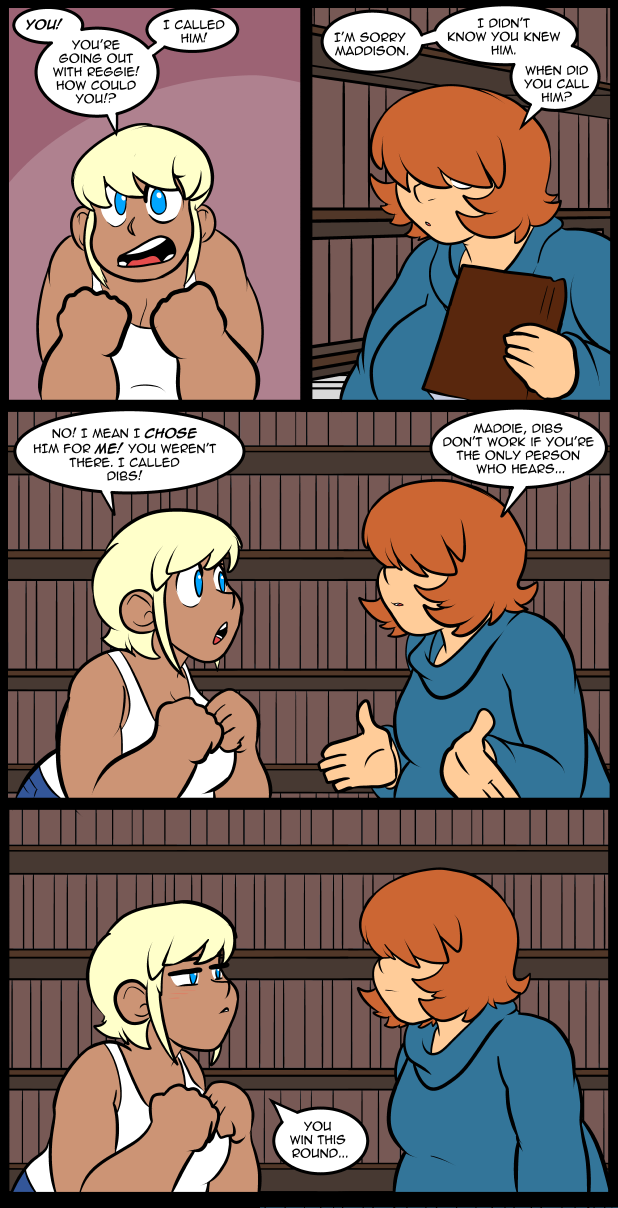 Maddison is not a master of strategy…

Just before the last splatfest I attained S rank in the big kid battles. An hour before it started I decided to play a few just to get loose. I lost two ranks. Every single battle was a loss. Yesterday I decided to play after finishing a page. Lost two more ranks. I’ll give you that some of the problem was on me, but I did get to the S rank, I’m not the worst player. My teams didn’t seem to understand the game at all. If I didn’t know better I’d say they were trying to lose ranks. Once I dropped to the lowest rank I at least thought I might pick up a win so my gear would level up, but I couldn’t even enjoy that possible ray of sunshine. I was on teams that won 2 games just before my timer went off to stop playing. I really wish they would show the highest rank you’ve ever gotten in addition to the rank you currently are, so I could at least point to it and say “See? I’m not terrible at this game! I’ve been at the foot of the mountain!”


Today I spent an hour trying to figure out why I can’t order replacement parts for my c-pap. The supply company said they needed a form that showed compliance from the doctor, a form that I WATCHED THEM FAX. This was months ago. After they fucked up the insurance, after they didn’t turn it in on time, after I had to go to the hospital independently of them to get a different mask. I could have bought the hose on amazon for $40. Not the $400 dollars they charge my insurance in what looks a lot like mafia style fraud. This shit right here is why the “greatest” nation in the world has health care that most of its citizens can’t afford. Corruption, graft! A $6 length of plastic tubing is $100. HOW DID WE LET IT GET LIKE THIS!? I actually raised my voice on the phone with the representative for a moment. After he told me they needed that paper I WATCHED GET FAXED I screamed that it was turned in months ago. I try not to do stuff like that, but this is just another in a long history of fuck ups to do with this machine. After that I was able to limit myself to short answers and not flip out every time the guy spoke, but it wasn’t easy. I got off the phone feeling terrible. Rage physically hurts me now. I have to rest after getting angry. I used to be powered by rage and now it’s literally killing me. Did I mention that I called them the day before and they were supposed to have told me what the problem was? Yeah, apparently the guy just didn’t do it after I hung up. They never follow up on their shit. The second I get off the line the memory of me seems to just blow away like a fart in the wind! If I have to go down to their office I am going to straight up die. I’d be better off pitching the c-pap back in their fat faces and just dying at the regular speed I was before. I wouldn’t even be this angry if the fucking thing had lived up to the claims everyone kept making for it. Everything to do with it has been a farce.

The horrifying thing is that there is a bunch of Australian right-wing politicians that want to replace our reasonably well functioning health system (which, God forbid, allows poor people a reasonable standard of health care) with the pile of steaming doo-doo that you poor sods have to put up with.

I’m learning to have a similar distaste for the whole “health” industry as well. Yes, they are providing the goods & services that people need to get/stay healthy (usually, though some meds are pretty messed up) but we just found out my wife has MS, and fortunately the meds will be mostly covered by her insurance. Monthly infusions (so hooray needing to go to the hospital to get your monthly IV meds) which’ll mean a co-pay for the visit & drugs probably means $100 a month, which is incredibly lucky for us. The meds alone are closer to 50 times that monthly (because of course the only drug designed to deal with MS costs $5000 for a single dose, not including the cost to get someone to jam it in your arm)

Anyway, health issues suck, pharmaceutical companies seem to be producing pure gold out of nothing, and even insurance isn’t a guarantee that things won’t be terrible (hell, half the time it seems the insurance companies are after you for daring to have to use the insurance in the first place). I hope the crap stops being so crappy and it stops being so stressful/rage inducing.

” pharmaceutical companies seem to be producing pure gold out of nothing” I’m afraid that is in error, because as the nurse said as she handed my father a bottle of experimental cancer drug, ” Treat these like gold.”(The bottle would cost non-trial participants $6500) I replied that it would have to be a lot cheaper to be gold.

Actually, the stuff they used on me contains a great deal of platinum. Seriously, it does. : )

It’s a big den of vipers that needs burned out.

Big pharmaceutical companies are just as corrupt (if not more so) than the big banks.

Maddison is a few pieces short of a chessboard.

This actually happened to me, yesterday:
while asleep, on Dec. 10, 2015, before today’s comic came out- I dreamed that I met Maddie. Maddie was dressed sort of in a punk outfit, like the punk rock stuff in the webcomic, “Love Me Nice” by A. Lafrenais.

[In the dream], Maddie asked me to go out with her, maybe in a dating way, to go to restaurants + mall stores. I guess I accepted.

Anyway- bravo! the only shows + webcomics that I dream about, are the ones that I’d especially like to [theoretically] be in.
So, congratulations. I think my subconscious really likes your webcomic. I know my conscious self really does. : )

Heh, that’s pretty cool. I will ship you with Maddie now, because sure.

At what point did Alex roll her eyes to Maddie’s claim?

I feel like Alex is the kind of person that would grow her bangs out specifically so she could roll her eyes at everyone at all times.

Alex prevails in the face of Maddie’s (almost) insurmountable logic.

Re: Rant I hate the insurance industry (almost) as much as I hate Microsoft, Google and Trump, and I work for an insurance company. The health coverage I’m saddled with (not a product we cover) is close to useless. A trip to the ER in September is costing $900 out of my own pocket; my insurance only covered about the first third. And since when is an ER visit $1300 bucks, anyway?

What can I say? Welcome to my world.

Government “health care” has murdered my children and successfully covered it up. Constantly provided my wife with devices that were either unnecessary or continually needed replacing. Going to approved “doctors” usually made the condition worse.

And people wonder why I’m happy paying a few hundred dollars a year in extra “taxes” to not have to deal with it anymore.

Well when you hide incompetent people behind beaucracy and money you get poor results. People already got free health care before when they went to the hospital and didn’t pay their bills… The problem is the system and mind set needs to change from knowledge/money/ego driven to results driven . if a five dollar bottle of meds does it then that is what is used. If 50k is spent on a treatment and it fails then the patient doesn’t pay a dime. There is such a thing as insurance against lost income… Other industries use it all the time.

Insurance doesn’t pay for much at all. Hospitals and Clinics have to charge extra hoping to get reasonably reimbursed. Quite a few doctors are going cash only (private practices, chiropractors, those “$500 MRI” places in big cities like Dallas). Insurance screws the customer and then screws the doctor.

Not many are making “MD Money” these days

Awe, but dibs are forever. A dibs battle should be held, may the strongest win.

Rant: OK, I hate insurance company’s policies more than most things. But reps from insurance and pharmaceutical company’s are funny. They are the traveling snake oil sales men of this era as I have been told by a rep. Which was weird. C-pap, is a great machine if it works for you. However, I takes sometime for the affect of the machine to become apparent. The cost for parts is insane because of the cert you have to go thru for the equipment.

Aww poor Maddie, I was hoping that Reggie would go on at least one more date with her.

I feel sorry for people in the states, the health system seems to be a way for the rich to print money and to charge you a random number for things that could be a lot cheaper.

I got ill once in the states when I was working installing an exhibition and was going to state in the states for 6 months. The cost of the this was $4500 and this was for effectively them keeping me on a trolly for half a day doing some tests and telling me I have a flu. However the hospitals computer system couldn’t cope with a UK address (which my boss gave them so that the bill would get to the right address), so they sent three bills to a UK address but stuck Chicago, IL 00000 at the end of it, so naturally got returned 3 times. When they stopped letting the computer send the bill and called me, I got them to finally send it to my work in the UK but they then had the cheek to say the bill was pass due and they were charging 8.25% interest for non payment. They helpfully included the three bills they had sent and were returned. My works insurance company (I am from the UK) told them they were not going to pay interest on a bill that obvious was not sent to the right address plus they thought some of the tests and costs were unreasonable (I had come back from Japan a week earlier and they did two avian bird flu tests for $1700, which the insurance company said was not required as Japan was not an at risk country), and and only paid $1900. The hospital tried sending a couple of lawyer written letters to my work and the insurance company who told them the payment was final. I did get a debt collector come after me in a comical way but thats another story….

Glad I live in Europe, with the UK National Health Service so I can visit a doctor or hospital for no extra charges. I pay about 140 uk pounds (about $220) a month in National Insurance which is a payment towards the NHS, Pension and unemployment and benefits. The only extra costs are medicines but these are capped at 8.20 Uk pounds per item (about $13), it is not perfect but for most things I am happy with..

Fun fact the NHS is the largest public sector employer in the world with 1.7m employees in the UK, as long as you ignore the army as the Chinese Army employs 2.3m service personnel and The US State department of defence employs 1.4m Service personnel and 720k civilian personnel. Only Walmart (2.1m world wide) and McDonalds (1.9m world wide) employ more people…

God she is just the cutest????

Those were supposed to be smiley faces with hearts for eyes