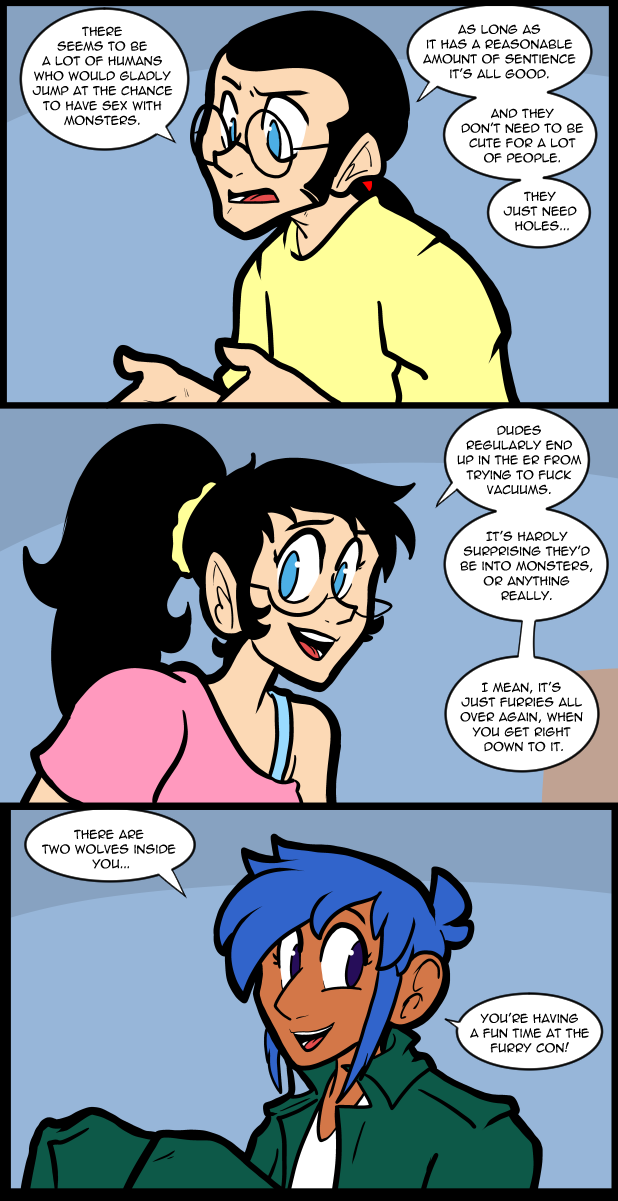 As an artist on the internet I’m stuck living in a world that most people don’t have to spend as much time in as I do simply as a requirement of my job. I’m sort of like Uatu the watcher in that I’m always on the sidelines of all these weird little communities, and never really get in to the ones I’m undeniably a part of. So I don’t really have many people to talk to about all the stuff I see. Since the comic isn’t normally gag a day I just sort of sit in my lair never getting dissect the ins and outs of this online culture. These out of continuity pages are like a little taste of a different kind of creative life.

I originally launched Between Failures as a gamer comic along the lines of CAD. The problem quickly became that I couldn’t make enough jokes about games because I didn’t have time to play them. Plus, I have a very narrow selection of games I enjoy and I tend to play single games extremely obsessively. Advance Wars isn’t the most fertile ground for jokes when you need them every day. Even now I’m only getting away with this because I have an audience built up who are invested in the things these specific characters are doing. If I tried to start off like this today it would be extremely difficult. Not only is it difficult to get traction, but there are so many more people who take webcomics seriously compared to when I started, and there were thousands of them back then. I got in at a moment where my tenacity allowed me to survive when every other aspect of my efforts weren’t up to code. Looking around today at new comics that start out day one with slick art is pretty rough for this old man. The thing that keeps me going is still my tenacity. When those beautiful comics don’t get attention right away, or not enough soon enough, the creators will give up. Life will get in their way and create an opportunity for me, or at the very least take out some competition.

As much as other artists will say that we’re all part of some grand community I rarely see it. What I see is the ebb and flow of competition vying for the finite attention of the finite audiences of the internet. That’s just the reality of life. In a world with finite resources you’ll always be in competition with someone or something. It’s pretty rough. Especially when you’re the foundation of the whole machine. That’s one of the only things I kind of miss about just being a wage slave. At the end of the day I was just a cog who had his little tasks to do. When I went home I didn’t have to worry about ad revenue or production costs, or anything to do with making sure the business was there when I got up the next day. Now it’s all me all the time. It’s pretty stressful. I’ve had more than one nervous breakdown over it all, but I just kept going. Over time you start to get used to it all. You adapt. Or you don’t, I guess. I adapted at any rate. I’m approaching 20 years of doing this and sometimes I look around and think “How the fuck did I keep this going for so long?” The bulk of the answer to that is I just got up and did it. Even when everything around me was trying to keep me from doing it, I did it anyway. It seems like my most useful skill might be just showing up for work.
Worth thinking about if you’re a creative person, or if you have some kind of crazy dream. I kept this whole mess going when on paper it really seems like it should have failed right away. You could live your dream too if you’re willing to give up enough.

Speaking of things I’ve given up, like my pride, let me remind you that you can support my work via patreon, or subscribestar, via the links above. Or you could just tell people who you think might like it who also have a lot of expendable income. There’s so many ways you could help. I’ve only listed two, but I’m sure there are other ways I just can’t think of. Maybe casting spells? I’m not against arcane support in any case.

Can it pass the Harkness test? Then I’m pretty cool with it. We don’t get to choose what we’re attracted to, but we do have control who and how we interact with others.

TIL that the Harkness test was a thing, and I gotta say there’s no more appropriate character to name that after.

I’m also not surprised that, according to Know Your Meme, 4Chan had a hand in it.

I just realized the numbers have been a bit messed up for a bit. Shouldn’t this be comic number 2492, not number 31?

Jackie’s currently doing some filler-ish strips that don’t necessarily have anything to do with the main storyline. This is number 31 in that series.

As someone who doesn’t game, I think there’s no need for another gamer comic. (Like any artistic and commercial undertaking, people will still create them, and if they do what they enjoy I can’t gainsay them as individuals.)

But I started catching up on this comic sometime in 2017, and webcomics in general a year before that.

I am here for the characters. I want to see what happens to them, above all else. The reveals we’ve had about Reggie and Garrett, or Evrina? Top stuff. Carol’s strength and trusting Thomas enough to open up and be vulnerable? Boffo.

“Dudes regularly end up in the ER from trying to fuck vacuums.”

Doofy from the first Scary movie obviously has a technique with his vacuum cleaner since he’s not once gone to the hospital, lol.

HA vacuums, but that’s nothing. I was talking to a urologist when I was in hospital a couple of months ago and he was complaining about having to remove a monopoly top hat from a patient’s urethra.

Another time I overheard nurses talking about a female patient who claimed to have accidently while cooking naked got an unpeeled potato stuck up her rectum.

WELCOME TO EARTH NOW RUN AWAY BEFORE WE TRY TO HAVE SEX WITH YOU!

I wonder how she is defining “Regularly”, but yes, men try to put their tools in various holes, and women try to put various tools in their hole, and both genders put strange things in their read end. I used to get it to a point, but now that you can buy a quality sex toy for like 8 dollars online, I get it much less.

Tons of Renamon Rule 34 out there… Just sayin’.

Bruh. “You can live your dream too if you’re willing to give up enough.” That’s hardcore dude. I might steal that for one of my BBEG’s… Anywho, I’ve been following Between Failures for over a decade now, and I’ve enjoyed every step of the journey, man. Keep keeping on, my dude. I think your ability to stick with Between Failures is definitely a commendable achievement.

The funny thing about the comic’s topic of conversation, if you want to think about it, is how horniness can be a major driver to overcoming racism. Within reason, of course. But yeah, when we meet aliens, humans will appreciate the ones we can bang way faster and way sooner than the other races.

As a manager, yes, just showing the hell up for work is a big deal these days. Even some of my better workers, in every other way, struggle to get to work. I don’t understand it, because half-assing your job at least gets you paid, while staying home does not (as they are WAY past their PTO limit).

And you’re right about the benefits of being a wage slave; that’s the very thing most people fail to understand about why we have rich businessmen–they take the risks, while the worker just works, reliably getting paid. Most people absolutely do not want risks and would prefer to make much less money, if that money was consistent and predictable. And that’s fine, but then you can’t complain that you make less without looking childish. Go start your own coffee shop if you think you are grossly underpaid by Starbucks. This is to say nothing about situations where people are only rich because of corruption or nepotism, etc–totally different scenario there.

So the monster sex thing is interesting. It’s particularly common in the LGBT community, and I’ve seen it said before that it’s because there’s a sadly large amount of people who see us as monsters, so we tend to see ourselves in the monsters.

It’s funny when people try to make being into monsters weird, when mermaids have been a common myth enticing men for millennia. It’s really not new or unusual.

The reasoning that worked against that, though, was the forbidden fruit. The more likely a monster was to have sex with a man, the more dangerous they were, but a lot of men focused on “easier.”

“If I can get laid, I will do so regardless of whether it kills me or not.”