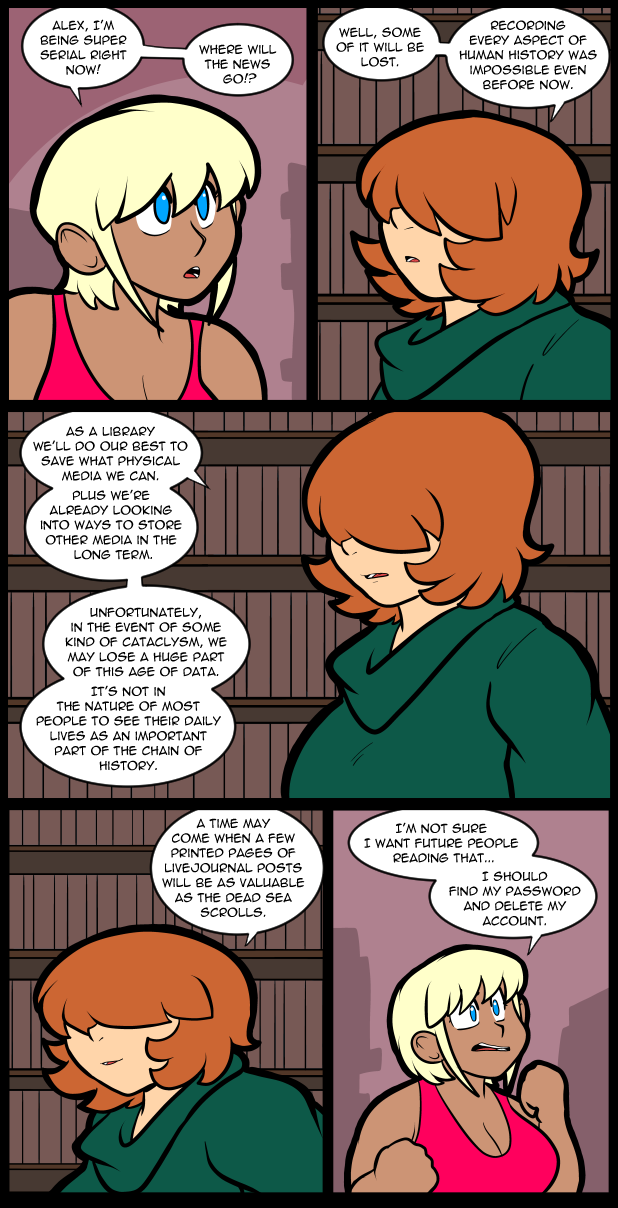 It’s hard to believe that your daily life would ever be interesting to anyone, but in 3000 years no one will really understand what it was actually like to live in 2022 any more than we really understand what it was like to live in 1776. Ironically in this era more people talk continuously about their comings and goings, moment by moment, but it isn’t really recorded anywhere in particular. In many ways my comic is kind of my attempt to tell people what it was like to be alive at the time I was alive. Of course I haven’t made but one print volume of the thing, so if something goes wrong my life’s work will simply be gone forever. Hopefully I’ll find someone to help me create books before I die because I can’t do this stuff alone. Maybe when I was younger I could have, but now I’m just to tired and worn down to learn all the new things in order to do that stuff. The first time was a huge hassle and took Mom forever to figure it out. I’m going to have to find someone I can pay to do it for me. I don’t expect I will sell very many copies if I did it, I just want enough copies to exist that after I’m gone I can speak across time to people who never knew me. Ideally I’d like a little companion book of the blog posts that could be cross referenced with the comic pages.
Honestly the blog would probably be more useful to a historian a thousand years from now than the comic, but the comic provides context a lot of the time.
Anyway, none of this would be possible without the people who support my efforts via patreon and whatnot. (Links above) If you want to help me speak to future generations pleas consider becoming a patron.

The comics you are posting recently are every bit as good as the ones you were posting a few months ago. And they are hitting deep philosophical issues without judging those issues.

I’d say you have nothing to fear in the quality of your recent work.

I was thinking about this yesterday, about how in all probability people haven’t changed in thousands of years, just the technology has, and we don’t know what the people of the BC times were doing in the day to day but I’m guessing it was something like what we’re doing now.

I have a friend who studies world history, + his view is: except for advances in science + technology, human society has been about the same, for nearly the past 2500 years. Hm.

As someone who has seen the Dead Sea Scrolls I find this terrifying.

I think that Waterworld got it right…

Sooner or later the printed word from our time (regardless of what is actually written) will be seen exactly that way.

Of course in Waterworld, it was the medium itself that was valuable, but I think someday people will be trying *very* hard to understand what the Hell we were thinking.

To get some idea of how much we have lost, and how interested people can be in it, check out some of the pages for the DNA testing companies. People are continually discovering little clues about things that were extremely important to people 100 years ago. And that’s not that long ago, really.

Mankind has only ever recorded historical events around the context of upheaval and large changes. It’s like most records the Historical Archives have are pretty much what the general culture was like, and all the wars. And that’s about it. We’re probably going to lose a lot of music and books from the 90s between now and the year 3022. But we’ll know that people wore parachute pants and grunge slowly overtook hair band rock (and maybe Smells like Teen Spirit may be there, who knows).

Since technology is progressing so quickly now, decades are blurring together and there’s no real tracking except GENERATIONAL differences in history. Which is even more obscure and generalized. TL;DR – I’m sure everything I find neat today will not survive a thousand years of historical data.

But for sure we’ll know about the Iraqi invasion of Kuwait, 9/11, the US invasions of Iraq and Afghanistan, the Syrian conflict, Yemen and Ukraine. And a small blip of US and global politics, as they were in context to all those moments of conflict. I’m pretty sure they’ll probably barely mention the Arab Spring (which literally undid 40 years of set politics in Northern Africa).

Most days, I read the “On This Day” articles in the Wikipedia app. Every day it seems like at least a dozen battles, spread over the centuries.

Warfare is mankind’s most persistent invention.

By that standard, Building things is.

Gobekle Tepe in Turkey predates Agriculture and husbandry, after all.

It’s also their most destructive and counter-productive.

It would honestly be for the best if grunge did get forgotten though. I still refuse to recognize it and “Smells Like Teen Spirit” as game changers.

To be honest, if you ever manage to publish this in print, I would totaly want to buy it. I do like having books around me because I find them really stimulating; just the chance to pick something off the shelf and read a bit and get transported by a story is something magical to me that the internet just can’t seem to replace.

There is a book available.
https://www.lulu.com/shop/jackie-wohlenhaus/between-failures-volume-1-revised-edition/paperback/product-5602741.html?page=1&pageSize=4

I work in publishing, and I’m a paid subscriber. I can help you sort out books–it’s something I do for work. Email me at betweenfailures@substantive.aleeas.com if you want to talk about it.

What’s the story with this email address?

I do this all the time. S/he’s created a mailbox just for you. After you reply, s/he will give you their real address to corespond at and will delete that address and all the trolls who found that address here on the interwebs will be get to no one spamming it.

So reply soon, for Jay’s sake.

Yeah, but why not just use the email for the comic that’s been on the about page for, like 13 years?

This makes me think of that sci-fi trope where aliens get our old television shows or something and think that was 100% how our culture was/is. But to be fair, we DO have more info floating around about us than our ancestors did, so I imagine historians will have a somewhat superior idea about us than we do of folks 500 years ago. Especially since 500 years ago, only the rich or the clergy (in western nations, and equivalents elsewhere) could read and write, so we only have their perspective and it’s mostly about their lives or interests, but now everyone can. They’ll find old harddrives in the future loaded with YouTube videos and blogs and Rule 34 fanart and learn about us that way.

And, curious; why am I seeing post times 9 hours or more ahead of me? I’m sure some people are in Europe or Asia or something, but Jackie, I’m pretty sure you’re not. Is the server for this comic in Belgrade?

Grandpa, tell me about the good old days again.

Ah yes, Timmy…we carried our phones around in the pockets of our pants. We didn’t have smart data webs grown on our skeletons, with a direct connection to our optic and auditory nerves. We also had WAY less cancer than you kids have today. Why, for most people, the biggest cancer risk was staying out in the sun too long. Yep, we had sun, too. You didn’t have to live in a series of underground concrete bunkers.

Back in my day, we had to look up information in books called encyclopedias….

The worry that stuff on the internet won’t survive into the far future always confuses me. I suspect we’ll have the opposite problem but with the same end result: there will be so much left over on the internet from before that coming across any one thing will be vanishingly unlikely. It’ll all be there, at minimum on some archive, just no one will look at it unless there’s some active tradition pointing back to it.

In some ways, that’s already the situation now. I can only imagine how much worse it will be as the internet just keeps growing.

They probably thought the same thing about the library of Alexandria until people came an burned it down.

Right. And, if it hadn’t burned up, it would now be completely digitized and indexed, and it would be possible to search it and easily find things that would take a hopelessly huge search in the old days.
The tech of the far future could easily outclass ours by the same amount.