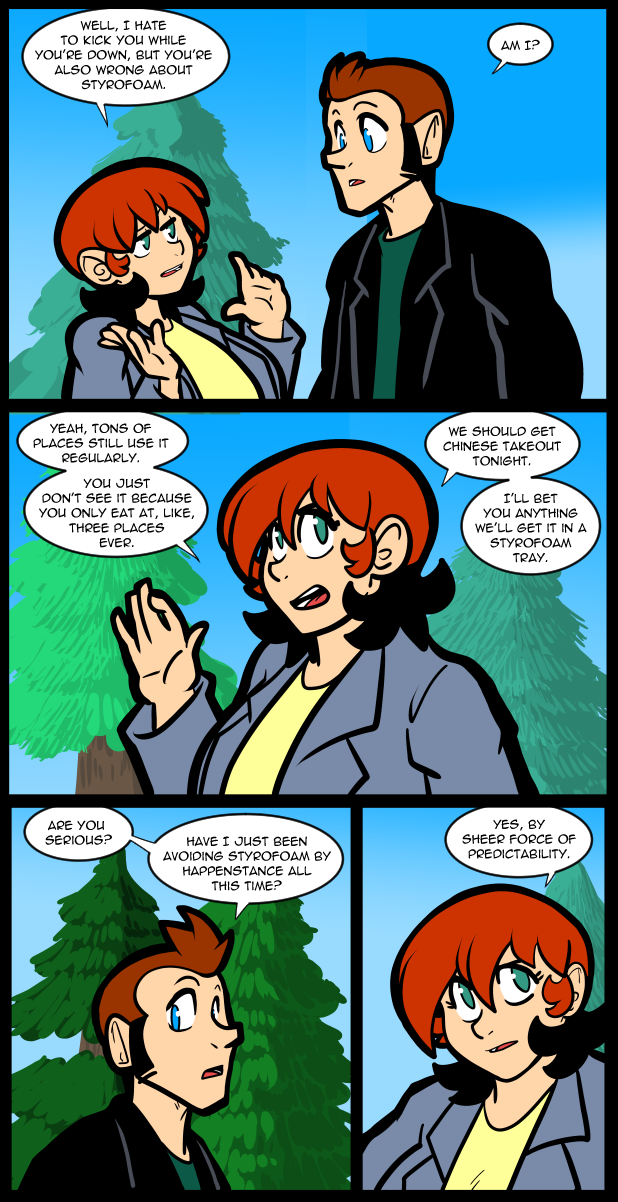 Grandpa has, as I may have said before, taken to wandering around when no one is directly observing him, and quickly eating as much as he can before he gets caught. In order to curtail this behavior we purchased child locks for the cabinets and the refrigerator. Grandpas has been completely dumbfounded by everything from chairs to shoes for months but, somehow, he was instantly able to figure out the mechanism that unlocked the refrigerator seals. It’s quite amazing how adept he is when his lizard brain is doing the driving. Our solution to this was to make a fake system of complex locks, which don’t actually lock, and hang them across the seal mechanisms. So far that has been one step further than grandpa can noodle in his impaired state.
He has gained so much weight since grandma died that neither mom or I can lift him anymore. If he keeps getting away with these binges he’ll eventually come to a point where he can’t get up out of a chair, which he’s already perilously close to achieving. He is now endlessly annoyed that only apples and oranges are offered up when he asks for cake, cookies, or ice cream. Generally if he is offered an apple he says “I’m not much of an apple person.” If he can’t get ahold of anything else however, he will eat and entire bag of them while you’re not looking. Which we learned the hard way by not hiding all the other apples one day. An apple is a pretty decent healthy snack. An entire bag, not so much.
I honestly don’t care all that much if grandpa eats himself to death. He exists in a state of seemingly perpetual misery. I would just as soon see an end to it. If that’s the end he chooses he’s earned it as far as I’m concerned. That said, I know what will actually happen. He’ll gain 400 pounds and live to be 100 years old with everyone struggling to move around his massive body, getting injured, while he only seems to grow stronger…
Sooooo… I’ll just keep offering him apples when he asks for cookies a hundred times a day. At this point the only way to get him to lose weight is to restrict his diet, but he gets more petulant and miserable the more you do it, which is exhausting. Not physically, but emotionally. For me at least every part of the kind portion of my brain says “just let him have a fucking cookie. Everything sucks for him all the time.” But you can’t be irresponsible like that. There are other factors to consider. It’s already difficult to bathe him and a 400 pound version of him would be nearly impossible to clean. Guh…

The other day I had my headphones sitting on the counter after dinner. They are over the ear, bright red, ones. Grandpa is up wandering around, looking for things he can graze on because he’s already forgotten he just ate dinner. He snatches up one side of the headphones and goes to jam it in his mouth. Just before he does he quickly asks “Are you gonna eat this doughnut?” To which I reply “Grandpa, those are my headphones.” At which point he notices all the other stuff stuck to the earpad and laughs. “Yeah it sure is.” He says, chuckling. “I guess I’m not all here today.” He got his actual dessert after that.

Anyway, if you made it all the way down here I’ll remind you that there are links above to support my work. If you enjoy what I present I hope you will perhaps become a patron of mine. If not, then fair well wherever fair. I’ll see you when next you visit my humble website.

Wait I thought Chinese food came in a little takeout boxes. Not in styrofoam per se

The rice is usually in cardboard, last I knew. But the big stuff, like the lo mein and the General Tsos? That’s styrofoam. Been a while since I last had Chinese but that’s still how it goes.

Chinese restaurants in my area have served food, other than rice, in plastic (not styrofoam) containers for many years. The containers are actually reasonably nice in that they have tight fitting lids, so they do not spill on the way home. Also, they can be washed and reused.

My local Chinese place uses aluminum foil trays, little cardboard boxes, and sometimes wax paper bags. Except for, like, the sweet and sour sauce, which comes in little plastic dishes.

I’m sorry to hear that, you + your family, are having these issues, Jackie.
I hope that things will go well for you guys.

It’s hard NOT to agree with the whole “Grandpa’s life is awful all the time now. If he wants a cookie, let him HAVE A COOKIE. Can he have nothing he enjoys any more? Must we keep him alive at the cost of a life worth living?”

But then, the other way to say that is “Grandpa’s pretty eager to commit suicide by overeating. Why don’t we help kill him by giving him everything he wants and then some?”

Neither way sounds like a good plan that doesn’t end with you being a monster. So I guess the only real plan is to go a-monstering in favor of life. Then, at least, you tried.

It’s why we really have to accept that as we have medically advanced enough that people can now regularly live into their 80’s or 90’s that if they do lose their mental faculties euthanasia should be a legal option.

I wonder if there’s anything out there natural that helps to curb appetite. You can definitely find charts online that help you figure out what your body needs when you crave, for example, sugar/sweets. Not sure if that’s helpful, but it dod help a friend of mine who has binge eating issues from being poor in Russia as a child (she hides food and hoards it)

If there was someone in the diet industry would have turned it into a prescription drug and monetized it.
After 28 years working in in-patient mental health I can tell you that managing food intake can be one of the most difficult problems to manage. Anorexia brings its own set of issues but that’s the opposite of what Jackie is dealing with. With compulsive eating managing the availability of food really is the most humane way to go. It sounds like Jackie already has an awareness of the problems with “just let him eat” but for those who don’t, I’ll toss out a word. Bed sores. Difficulty bathing is just the beginning of the problems with caring for a mobility impaired, obese person. It’s difficult. You feel like a jerk telling someone who was once one of your caretakers that they can’t have food when they feel hungry. It’s a hard path to follow but the other choices get a lot more difficult just a little ways down the road. Sometimes all you can do is seek the least bad choice.

Dear Jackie, So sorry to hear about all what’s happening with your grandfather, I can only imagine how hard it is for you and your family (ánd himself, to at least sóme extent), and wish you all the best. …Are there perhaps some non-fat and non-sugar (and probably non-taste) cookie-like snacks you can try offering your grandpa instead of apples (healthy, but still fúll of (fruit)sugars!!) maybe? You probably tried something like that already, but…?! Good luck, and as always thank you for your online comic! Greetings from The Netherlands.

So your grandpa has become Super Kami Guru from DragonBall Z Abridged? He’ll drink up all the water and become super fat, but live forever until cannibalized?

Apples, oranges and bananas are not really great snacks. They are pretty much all sugar and sugar is addictive, leaving you craving your next hit. So, look, controversial here but I did the Adkins diet about twenty years ago and lost 40 pounds. Medical wisdom back then was that that kind of diet would kill you. Today, not so much. I’d do the whole Adkins/keto/carnivore thing again but a pure meat diet is expensive and I’m one of the poors. I’m also addicted to my carbs. There is an alternative I’d like to propose, however. Eggs. Specifically boiled eggs. When I was on Adkins My diet was about 2/3 eggs. If you boil a huge pile of them and keep them in the fridge you can give them to your grandfather whenever he wants food. Just give him as many as he can eat and he will soon not be hungry all the time. Keep him on that diet long enough with no carbs and he’ll lose weight. And get so sick of eggs he’ll eventually puke at the thought of eating one (that’s why I eventually dropped Adkins). Sorry about the wall of text.

I’d second this. I’ve lost about 70 lbs. just by controlling carbs, including natural carbs such as fruit. Eating carbs, even healthy carbs, isn’t really very filling at all, and in fact sugar or simple starches tend to make me feel MORE hungry, not less. Could be this is part of what’s driving grandpa (as well as despair).

Cheese is also a good way to fill up grandpa and keep it (relatively) healthy. Both eggs and cheese are high in both protein and fat, and that combination is what’s filling.

If anyone’s unfamiliar with this kind of thing, here’s a simple thought experiment. Most of us can go to the movies and eat a huge bag of popcorn. Now imagine that bag is filled with cheddar cheese. It would be a lot harder to eat the whole thing.

Hi Jackie, This is Animufan under a different pseudonym (which is coincidentally very similar LOL). I decided to re-read the comic as I am just now getting back into webcomics. It’s just as good as I remember, if not better.
The transition to color is still one of the best things I’ve ever seen, The character interactions are splendiferously heartwarming, your blog posts alternate between witty and deep, And you still try to connect with the readers. I want to thank you for every single day, hour, minute, and second you have put in the working on this. I forgot how much I needed this comic I’ve been struggling with depression for the last two years and your dedication of this is inspiring to say the least. I don’t truly know you as a person but from what I’ve been able to gather from the comic you seem like one of the kindest and most caring people I could ever meet. I want to thank you for all of your dedication laughter sadness and clear to what you brought me from everything you do I cannot express in words how much does comic means to me. Thank you for everything Jackie, and I wish you the best in everything you ever do, want to do, and can do

No problem man. Thanks for keeping what you do free for everyone

Hi Jackie, Also a caretaker here but for my sister.She has a heart condition and is a serious fall risk. One of the things I’ve found to help with the sweets is always having like 3 or 4 types of propel flavors. Pop that into a water bottle and it’ll keep her hydrated and give her the sweet but usually none of the calories. Granted I’m usually more worried about making sure she eats enough…. it’s hard almost every time I leave her unsupervised she falls. Which leads to new injuries that we have to deal with. Anyway good luck and I hope things get better.

Hehehe, I liked Carol’s look above.