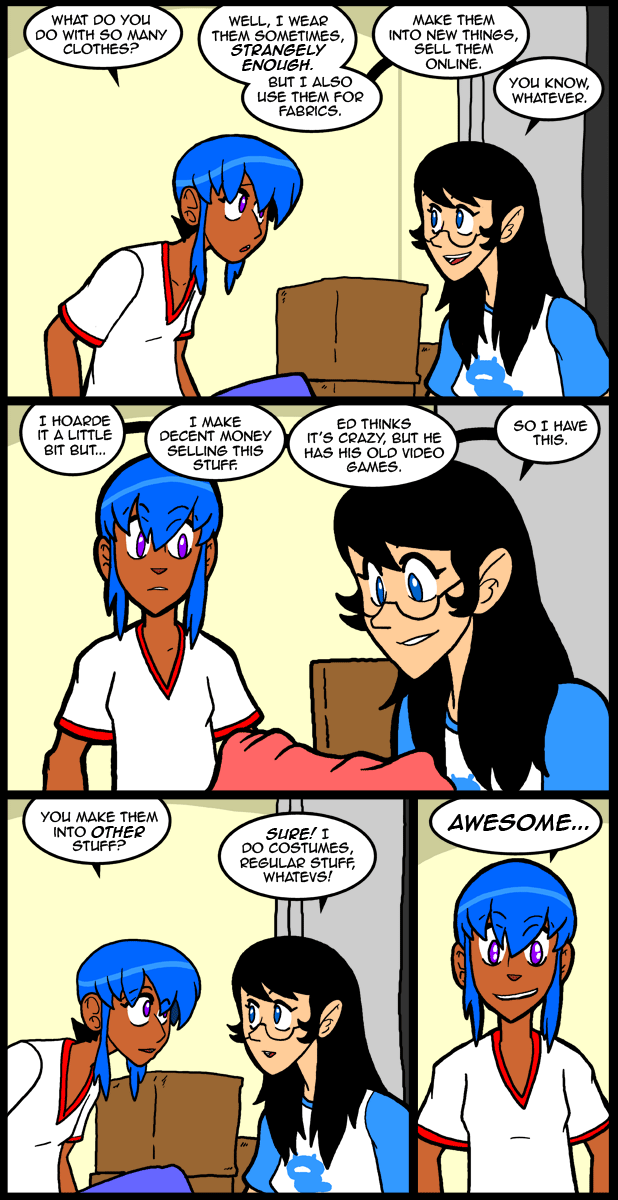 As you regulars will no doubt be aware, my internet service is terrible. Pretty much everything in my life to do with the internet is crap, from the servers that host the comic and right on down the line. This has caused me to not add anything new to my reading list, or media folders, in a long time. If the site requires even the basest amount of bandwidth I can’t experience it fast enough to tolerate it. In fact, if I were not me, but had the same service for the net, I wouln’t read my own comic. That said, I got a rare good night yesterday and decided to start reading Homestuck in earnest. Prior to this I’d never gotten more than a few pages in because it just wouldn’t load fast enough, but I took advantage of this brief window and read the first section. I had a couple of people try to explain the whole thing to me, so I had a general grasp of the plot, but the journey is really hard to describe clearly. Having experienced it properly it makes a lot more sense.

In some ways it reminded me of playing Earthbound for the SNES. It has moments of self awareness that are so silimar to games of that time. Games like that were unique even then, so not as many people are aware of them now, but I feel like young readers of Homestuck would enjoy the Mother series based on this similarity. Nintendo should market some kind of remake special version of the series or something and mention that stuff. (How do I always wrap this junk back around to Nintendo…?)

Anyway, there’s no telling how long it will be before I get to read more of it. I only stopped where I did because it was a good point to remember for later. If I had a free day coming up I would have just gone as long as I could have until the net gave out. I haven’t even properly seen the whole main cast yet apparently. So I still only know the girl who wears the shirt Jessica’s is based on from fanart. XD

At this point Homestuck doesn’t need any more fans, so you can take it or leave it, but I intend to take it. Eventually.

Yes! A new number to add to the Horde!

Keep it up though, every section seems to be better drawn, animated, written, and when it comes up has better music.

Unfortunately the self aware mechanic goes out the window somewhere along the line. There are some bits with Hussie but other than those…

Anyway, yeah! Glad to have you aboard the Homestuck Express.

It’s not very express in my house. T^T

The Homestuck Handcart then?

You should report your ISP to the UN for human rights violations.

I was so happy when I read that, I don’t even..

It’s a bit before my time, but I had the chance to play mother 2 via emulator. Amazing game. I believe a Mother revamp should have had priority over the Kid Icarus..

You should name-and-shame your ISP.

For example, Brighthouse of Central Florida has the worst damn payment system. They have javascript to ensure you enter your checking account & routing numbers by hand TWICE, specifically killing auto-fill and copy’n’paste. They go out of the way to make it as difficult and error-prone as possible.

Heck, I just looked, and their entire site is down… bill-pay, tech support, sales, everything. All of brighthouse.com is not responding. Sad.

You know, I havent seen what homestruck is, but, if it’s a webcomic/story and they havent put specific safeguards in to stop right clicking, i’d take a few low-peak hours (on your bandwidth) and “borrow” the “panels” down onto the comp to read, i mean if you’re hosting this yourself the bothered readers would prob understand if the site slows down a bit, after all.
If you delete the panels afterwards I wouldn’t consider it as illegally copying or piracy, just borrowing xD (besides you could allways ask them, if you would feel guilty without permission)

I don’t think you can right-click and hit ‘save image as’ for flash animations or text, so there’s a bit of a problem with your theory.

the text is a bit of a problem yeah but he could just save the entire pages as html.

I’ve found that this sort of problem (low bandwidth) isn’t very difficult to work around. If you have a series of pages you want to visit, you can load a bunch of them up at once. Most often, you want to queue them up in order. The reason this can work is because I don’t use my computer all the time. In fact, I don’t even use it half of the time (though it’s a close thing). So while I’m sleeping or working or off doing other things, my computer can be patiently building up a buffer of pages for me while I’m gone. Of course, you can’t really do this for normal browsing, but I don’t find that to be a problem. That’s mostly because I have broadband and the pages I have to queue have hundreds of megabytes of data attached to them, but it’s also because no matter how fast my computer is, untill it gets to the point where it can predict what page I’ll want and load it before I ask, my browser will never be able to load pages as fast as I’d like it to. Also, it seems to sometimes take the browser a moment to figure out the page layout and actually render it, even after it has the data. Is anyone else annoyed by that?