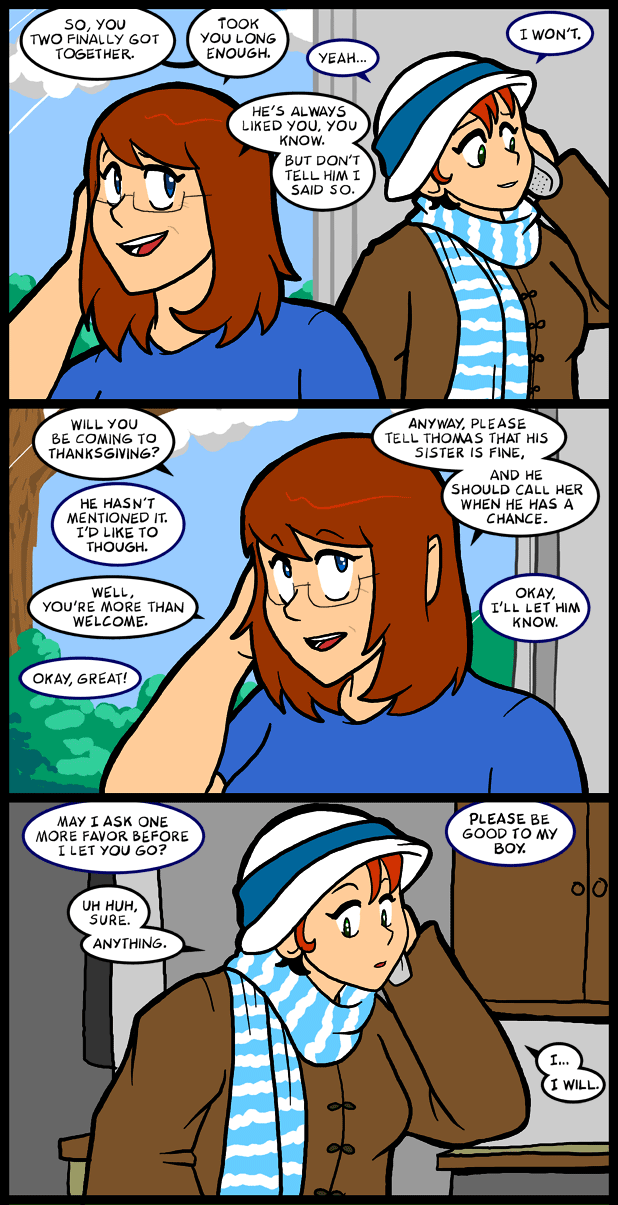 I’m a real sucker for stuff like this, but most of you are already aware of that.

At no point does Thomas’s mother actually identify herself as who she is, but I meant to imply that she had  met Carol previously.  Likely while visiting Thomas.  Not as the mother of her boyfriend, but as the mother of a coworker.  Carol is not so stupid as to not realize who she’s speaking to.  The prior page more or less states that she’s seen Carol in person.  For the moment I’m sold on the choice, but I may alter the dialoge slightly someday to make it more pedestrian if it looks like people are confused.

If some people are confused, let them be. It’s not your job to spoon-feed them. Besides, all that background is implied, and the conversation feels more natural this way. Let it stand.

Also, even if anyone *is* confused, it’s not like yours would be the first where someone found themselves saying “huh? did I miss something?” then reading the author’s notes, or a later panel, and realizing what it was. Then they say “ooooooooh, I get it …” and they move on.

The ones that don’t, they either stay quiet, or they make the mistake of trying to get all haughty about it, and the pet trolls come out to eat them.

Also, she reminds me a lot of Ash Ketchum’s mom in the cartoon. No, I don’t know why, it’s just a feeling I’m getting.

Now it’ll be Carol’s job to remind Thomas to change his underwear.

I want to see more of “MOM.” Intriguing and attractive with a streak of savoir-faire… GO MOM!

It made more than enough sense to me.

Its very clear from the context, and .. yes, it seems more real this way.

Actually, for the sake of storytelling, I’d urge you not to alter the dialog as a writer myself. Anyone coming into the story on this page should at least have some sort of understanding that such things were already dealt with in previous pages. Often times implications have a way of explaining themselves.

Why do I hear Thomas’ mother speaking with a Northern Minnesota accent? Obviously Thomas grew up in the area — he and Nina went to the same high school — but I get the impression she moved back ‘home’ once her boy was on his own.

Oh, and @Crave– I think you nailed the hat this time.

Any plan where you lose you hat… is a bad plan!
–Kaja Foglio, Girl Genius

As an audience member, I urge you to do what you feel is right for the story and then clarify the best you can (or let the rest of the viewers do so for you) when asked. Understanding is a multi-person venture and stories run almost like a dialog between the author and audience. Anyone who thinks they don’t need to alter their diction (proverbial or not) from time to time for the sake of understanding runs the risk of never obtaining it at all….

I echo the sentiments that the dialog is fine as is. There is enough there to infer that they have prior knowledge of each other at least.
Although when she mentioned his sister, I had a second when I thought she was referring to herself and got myself confused, before I remembered that her mom-ness had already been confirmed.
Plus she talks like a mom. Don’t let this make you change anything, I confuse easy anyway. :)

I’m always a little put off by that line “Please be good to my (son, daughter, sister, etc.)”. What do prospective spouses say or do that makes future in-laws say crap like that? The worst is when a burly brother or dad takes you aside and says “If you ever make my little girl cry…”. Which can be interpreted as “If she ever cries for any reason, including she has a bad day at work, she’s on her period and she can’t have the puppy she wants in your apartment…”

It’s nothing that a prospective spouse may do – it’s just that we are very attached to our kids and want the best for them and now we are about to turn their happiness over to someone else. We still wish we could make sure that they are happy, but we realize that we will no longer be the center of their universe and its our way of saying “please love them as much as we do!”.

I think I get that they have met before, seems fine on that level. My concern is how quickly she asks about her coming to thanksgiving. I guess maybe they know each other enough and they live in the same area or something, but for me that was always a big deal. Bringing a significant other home for a holiday meant you’d been dating for a while. Though that could just be me and my inexperience with that..

In my family almost anyone is welcome furring the holidays. We get girlfriends, their parents, old people I don’t know… and what have you. This might be unique to my family, but it’s so normal to me I didn’t even think about that.

I want you all to know that I am tremendously endowed.

“I want a gal just like the gal that married dear old dad!” We should be so lucky. Tough break for her, though.

I guess I’m the only one that didn’t get that they’d met before. Maybe it’s from my own experience. But when she was describing her, I got the impression that she only knew her through talking to Thomas. I guess looking back Thomas wouldn’t have described Carol as having large breasts to his mother… most likely. But, it did make the last page kind of cute… because then it meant that the number one thing that Thomas had told his mom about her physical appearance was her eyes. This all would be similar to things from my life, so that’s probably why I saw it that way.

I retract my statement from the previous page. Thomas has a hot Mom.

And it made his “type” a whole lot more Oedipal….