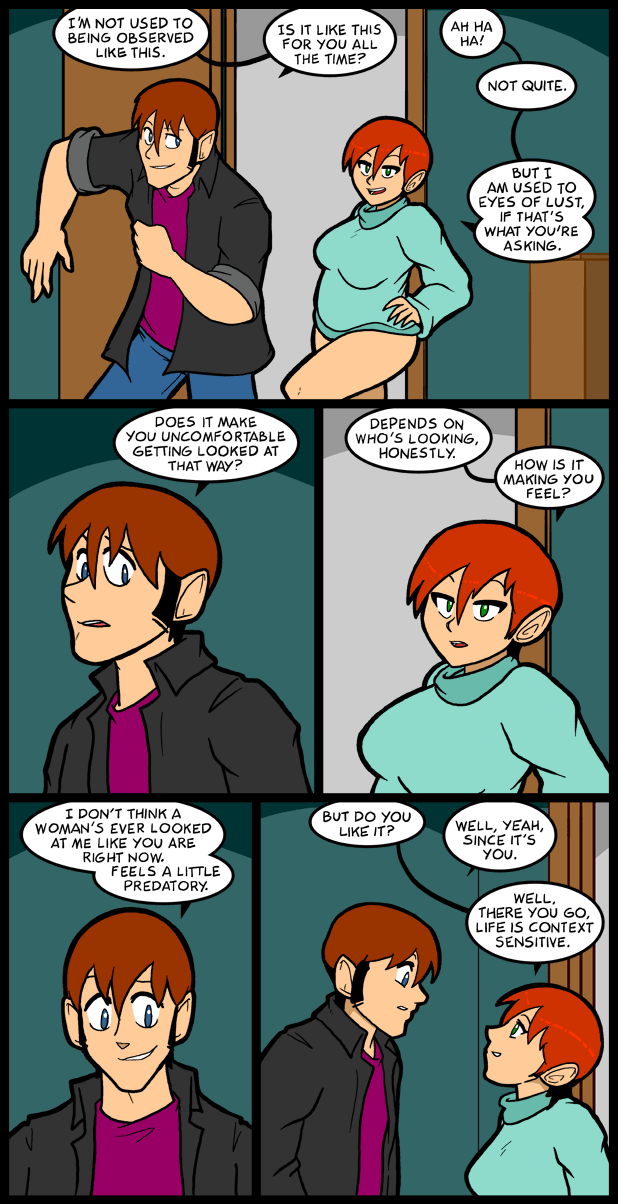 The last page made for some interesting fan interactions. It is surprising how much of an affront some dudes find seeing another dude in a state of undress. It’s like, what’s good for the goose, man. The ladies need a little love too. It was also surprising to see that Thomas has a dedicated following of women (and a few guys) who were very pleased with me. Anyway, I accidentally made a page out of order and it threw off my counting. The dressing Thomas page wasn’t meant to be the Friday post, but it was far too late by the time I worked out the dates. Not that it ended up making any difference anyway. By and large you guys are pretty free and easy about everything I do. I’m certainly glad of that. XD

Manekochan sent me a Christmas box. Well, I don’t think it started out that way. I think it was just a friendly box that became a Christmas box because the calendar snuck up on us. Snuck up on me more than her since her stuff is still sitting on my desk. I’ve now made it a public affair though, so shame will drive me to brave the post office.

Anyway, she sent me a set of Green Lantern toys. (Other stuff too, but Green Lantern is what I’m concerned with at the moment.) True to my suspicions they are well made figures, if simple. The box had Hal, Tomar Re, a 4 armed guy I don’t remember, and a robot. Hal’s left foot had been warped by the package, so he couldn’t stand very well. Luckily it’s a type of plastic that can be adjusted with hot water. He’s perfectly fine now. The other guys, against all odds with their thin limbs, were fine. The three biological Lanterns are the best ones. The robot guy is weird and off putting. He’s a concept figure. Now, I can understand doing a concept figure toy if the concept is cool, but this one is not. There is a really awesome robot lantern pictured on the box. My guess is that they made the toy before someone at the studio said “Who the fuck designed this abortion? Get over here and fix this shit!” At that point the toys were already made and nothing could be done. He’s still not a terrible toy per se, just not as cool as the others, and waaaaay not as cool as the box art. XD

They each had a construct made of translucent green vinyl too. They are fitted to their arms, but the hands are so similar any Lantern can use whatever you like. They’re really heavy though, so you have to support them with your hand. Which is fine for a little kid anyway. Doesn’t make for a very compelling display, but there you go. I’m not the target audience. They still look pretty cool just standing there. Plus they are more or less in scale with the Marvel toys.

They are pretty solidly made. They feel made to be played with. The lack of articulation reminds me of the old Star Wars toys, not in a bad way though. All in all they are good toys. I hope DC sticks to this scale and level of quality. Their other toys are just too big.

Dammit.
I realized it’s PrO and not PAO …

I would like to add myself to the group of fans who say Thomas without pants is *yum*.

“Well there you go. Contex sensitive….”

and frak I was gonna make an illusion to conker’s bad fur day… Fml..

I think that Thomas in the first panel here is probably the sexiest one yet. Not really sure what about it is sexy but definetly sexy! Also I have been feeling an extreme sense of deja vu these last few strips because my husband and I have had almost this exact conversation… Heh. The results were much the same :3

On yet another readthrough, I find it necessary to say that Tomas’ outfit is absolutely badass. I actually have similar clothes, and now I’m kind of inspired to wear that particular ensemble. Not sure if I have that same color shirt exactly, but I do have a purple which is probably close enough.

As someone whose only redeeming feature is his own selection of badass clothing… I’m unimpressed by Thomas’s collection… but to each their own.