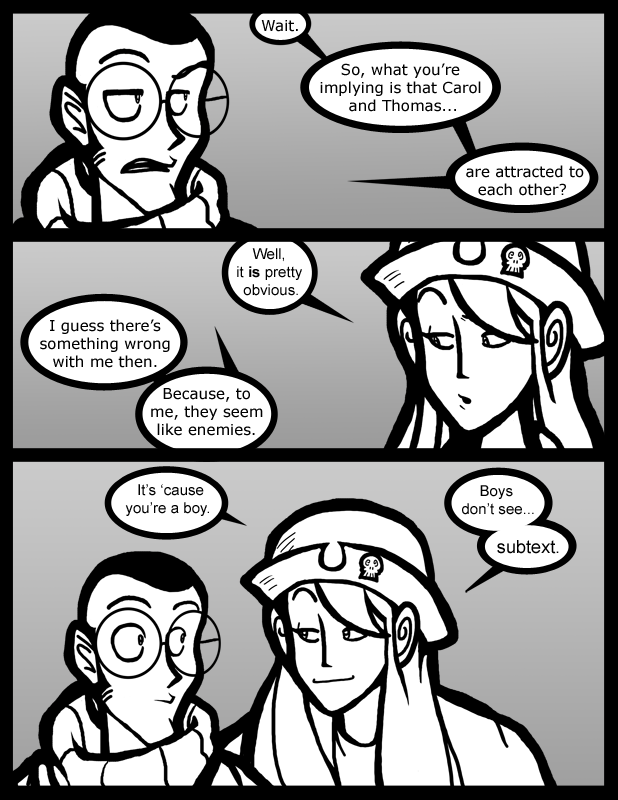 Hhm I’m a boy and I’m sensing some subtext :D

It’s cause subtext hides from us.

You just have to highlight it. Or inspect the code.

Subtext is something you have to train your mind to look for. You have to pay extra attention to see the little details.

Oh no… we SEE subtext; we just tend to assume we’re hallucinating and ignore it.

How I wish that were more often true. I was like that, once upon a time… Then I was connected to TvTropes, and my thin veneer of sanity was rebuilt with laser eyes.

Soti, you are absolutely 100% right lol

For me its like i see the matrix, except instead of numbers, theres subtext.

Nina’s face says it all.

Soti’s right with that one. I can tell when someone likes me, but I’m going to wait until they have the courage to say it.

Yeah, we mistake subtext for girls just generally not noticing or hating us.
Mainly because 99.999% of the time it’s because they did not notice or hate us.

Its easier to see subtext in a comic than in real life.

Oh, I see subtext all the time… especially between girls, but then, I’m a pervy yuri writer and shipper.

Of course not. You need a genetic mutation on your second X-chromosome, as-well as X-chromosome mosaicism to develop extra cone cells in your eyes that enable you to see subtle variations in the subtext spectrum :))

Personally, I feel being able to convey oneself honestly should be more valued than the ability to see subtext.

Also, I would like to assert that the problem with guys not seeing subtext is that a guy who misreads subtext frequently gets in a lot of trouble for it. Gals that misread subtext usually don’t, except with other gals. As such, many guys learn that it’s safer to ignore subtext.

Oh, and I’d like to assert that something like 90% of the time that some woman has asserted that she read some subtext in what I was saying, she was completely wrong about what my real intent was. I’m autistic, but I focus on my communication skills. So there’s generally no subtext to anything I say.

The only thing I may never master