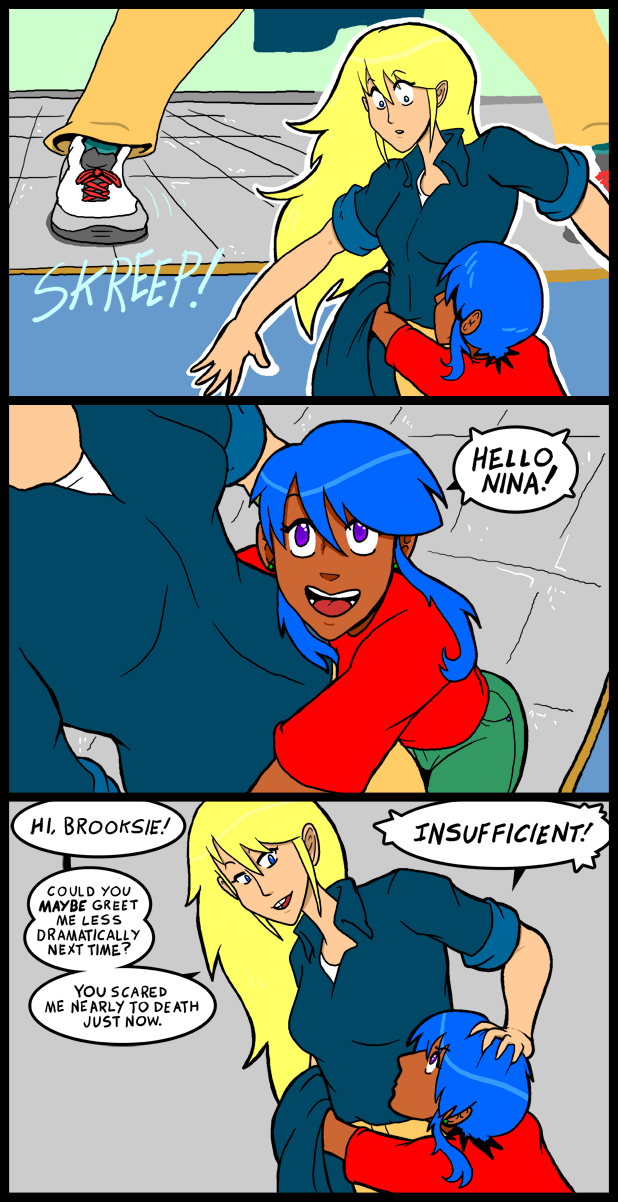 I’m not sure if I’ll have the site in working order by the time this posts.  If nothing else it can be navigated.  This whole mess started whith the Internet Explorer thing.  I was sitting here trying to figure out why I was messing with stuff in the first place.  I had forgotten.  XD

It looks like you guys might be able to transcribe the comic after I’m done though.  That should be fun.  Then foreign people can translate the transcripts and get an idea of what  the comic is about.

Okay, so with Nick’s help from over at Treading Ground I was able to get the front page kind of working.  Most regulars won’t notice anything other than the new page.  As far as the archives go I have no idea.  Nothing I do to anything helps.  You can read them at least, which is something.  Nothing to do but to keep at it, I guess.

If it can’t be done in an overly dramatic fashion, it’s not worth doing.

I’ve always said there’s no such thing as overkill.

And then Brooksie being cuteness incarnate.

And then I comment in the transcription part. Derp.

And is it just me or is the home screen darker than it was before?

And the text is gray now, not green. That didn’t help when my straining eyes were assaulted.

Over all, I’d say my reaction was positive!

And every thing is shoved to the left.

You have got to start thinking out what you want to say before you hit comment, dude. X3

But I do have to concur. =( Text on the main page was way too dark, background in comment mode is way too glaringly white.

I’m working on it.

well then hurry up, that text color is makin it INCREDIBLY HARD to read on my iPod and PSP, which are the only ways I can access the web rite now cuz my computer got broke by my cats (don’t ask)

Take your time, oh glorious master of the fine arts!

Happy to report that the comic is working in IE now! Yes, things look different, but all is good. Get a nice relaxing massage, you’ve earned it! :3

Oddly I’ve never had a problem with it working in IE…. what was the problem, anyway? (I use IE 8)

The art and the story people, not the stupid pages they’re presented on… Geeze!

On my screen the Comic was cut off on the right hand side by the banner.

Perfesserbear makes a good point, as long as you can read the comic life is good.

GO NINA!! She Stayed On Her FEET!! Total props! That would have taken down a lesser mortal!

Firefox 3.6.10 here and no problems at all. (Except that the new colours aren’t as easy to read as before.) As a matter of fact, I’ve never really had any problems before neither.

I discovered this comic probably less than a week ago. I plowed through the archives over a few days, and now this is one of my new favorites. Well written, well developed characters, and I enjoy the interaction between them. I hope you can resolve the site issues, but as long as I can see the comic itself, I won’t raise a fuss.

It just occurred to me this morning that Nina reminds me of a woman I used to work with. (Not in retail.)

I have a suggestion for a voice actress to play her if BF gets animated! =D

Nina Futterman could do it. So far I know she voiced Adam Lyon from My Gym Partner’s A Monkey, and Chum Chum from Fanboy and Chum
Chum…

Really, I imagine her voice when reading dialogue spoke by Brooksie.

Wow this is weird.

Normal archive viewing equals white everywhere with “Between Failures” and navigation buttons only being text links.

However, append “comment-page-1” to the end of the link and full site style applied including colors, navigation button images and the temporary logo. How does that work? And does this information help you in any way?

In terms of the comic, it still looks awesome and the floor looks so shiny. I’m not sure but this might be first time we’ve seen the floor, but I might be wrong.

I should mention that all comic images are visible, it is just white everywhere else, in case I wasn’t clear. Also, this is a Firefox version 3.6.10 user.

why don’t I have a Brooksie?

also this is the first time I’ve ever seen any actual complaints in the comment section on this site, usually it’s just glowing compliments or wishes to return to Brooksie and Nina

Totally read that in an Immortan Joe voice.

That is just too cute.