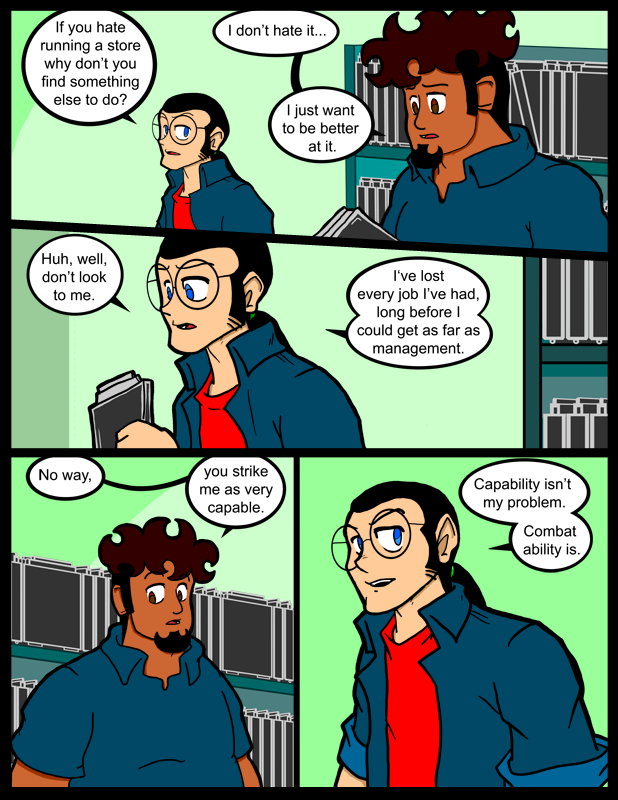 I had a series of weird dream the other night.  The only one I remember, or am comfortable talking about is as follows:

This girl was working for a big company and ended up in an industrial accident which caused her to grow many stories tall.  She was kind of timid and weak willed, so when they turned her into, essentially, a walking billboard she didn’t really put up a fight.  The company made her live in the basement of a skyscraper while the “tried to find a cure”.  Anyway, a rival corporation decided they needed a giant to show that they had the same kind of technical skill, so they made this really insufferable guy into one.  Eventually they ended up meeting each other and the guy was such a tool it ended up as a fistfight.  They were encouraged by both companies at first, since the press would be spectacular, then they started destroying the city in earnest and endangering lots of people.  As the fight escalated they both began to exhibit additional powers.  The guy’s were mostly ray based and the girl’s were flight, super strength, and that sort of thing.  Eventually she flung the dude into space, so he died a most hideous death.  When she landed after disposing of him she was really, really, mad.  I woke up at that point but I suspect that everyone was in a lot of trouble.

Rofl. I could run a store if it were pizza if I had the drive to actually do it. My problem is that I’m lazy about the amount of effort I exert. As for dreams, have you ever went to sleep and dreamed an entire work shift? Then when waking up, you thought it was the next day?

I don’t think I’ve had a one workshift dream.

I did have a dream that felt like it covered years of life to such a degree when I woke up I had forgotten my entire class schedule, despite it being half way through the semester. Fortunately, I was able to find where I had, um, left it in the pile of papers on my desk that I’d let build up over the course of that half semester, so I was able to recover well enough…

hmm strange dream indeed, I also have had strange dreams. but what struck me as wierd one time was that I was dreaming of a girl (one whom I have never met) in more than one dream, over a span of 3 years. there are some dreams I remember vividly well, and the dreams she was in was in most of them.

the odd thing was, she was never that “dream girl” kind of representation, she was always in the sidelines of my dreams, no matter what they were. like in those shows with that “mysterious watcher” character. I would see her once and BAM shes gone.

“Kicking ass is my specialty!”

i hope, for your sake, you never have dreams at the level of messed-up-ness that mine get to. One of the last ones i remember was me and my friends talking around a table on an airplane over the antarctic ocean when a giant shark thing came out of the water and scared us all by jumping above where the plane was(reasonably high) and then zombie/robot things that looked a lot like regular people started entering the doors to the area we were in(apparently the inside of the airplane was the size of a small mansion) then me and a friend survived by hiding in the economy class section with some of the passengers. Then, some of the robot things came and sat down a in different places all around us, but not in our row.. A few passed by us and we ducked down under the seats, and then when we sat down again, we saw all of our friends, formerly human, now the robot/zombie things, pass by us, fleeing in terror. We heard a loud thumping noise getting slowly closer to us and then I woke up, screaming. Not my worst nightmare, but the only one ive bothered to try and remember, and i know i left out some parts that added more fear in.

he is capable of kicking your ass!

Every place that I work closes down, even, to some extent, the Wal-Mart photo lab that I worked at. It eventually was demolished and rebuilt in another section of the store. It has yet to happen to the place I currently work, but, I wouldn’t be surprised if it happened in the end.

The strangest dream I ever had happened when I fell asleep in my seventh grade science class. I was in a dark room lighted only by a vistorian oil lamp were a Victorian woman was knitting while a boy was playing with a ball by rolling it across the floor, I took a step and ending up slipping on the ball. I woke up clutching my desk, at which point my friend turned to me and asked “Did you fall asleep?” It is also one of the few dreams I have been able to remember after years have gone past.

I’ve had a few odd dreams also, but I’ll just tell my favorite odd one. Ok, it took place entirely in my front yard. I was playing with some girl I still have no idea who she was, but anyway- There was snow on the ground (even though we were dressed for spring or summer. We were just having fun throwing snowballs at each other, until she smirks and puts her hand behind her back. Strangely i saw what happened next in 3rd person-water started forming in her hand, till it became a more or less ball. She threw it, I woke up wondering “What the..?”