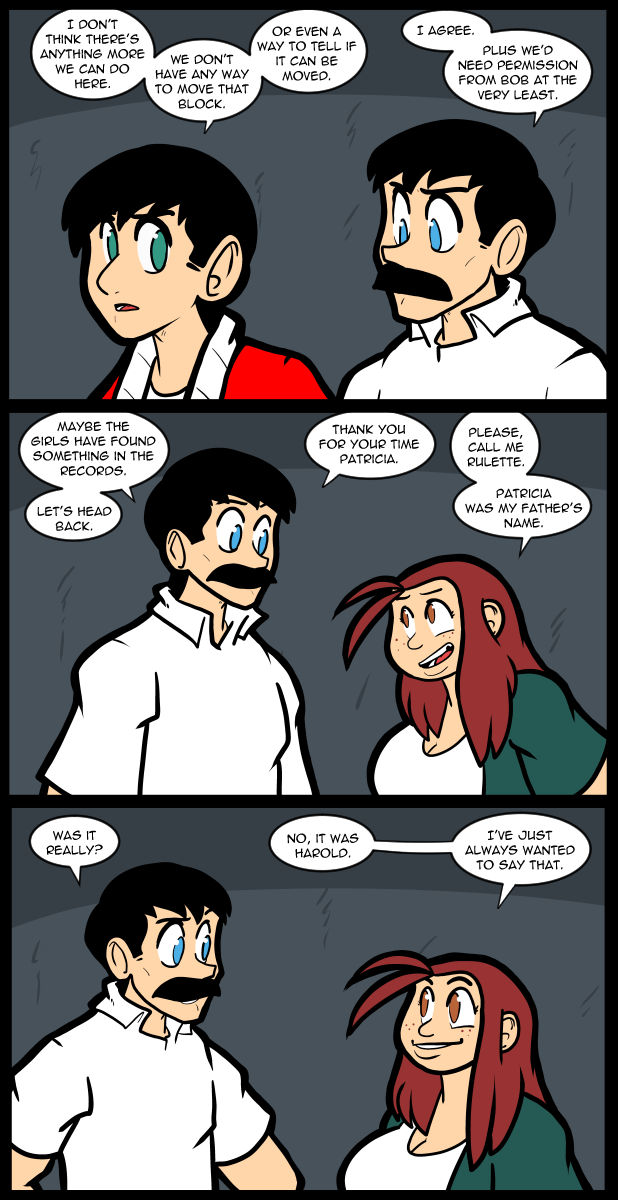 I suppose I can’t continue to simply not write anything under the pages, in spite of my very resilient anger. That said, I am not feeling very jovial. How about some numbers instead? The Patreon has something like 922 or 4 members at the moment. It was 948 at the end of last month, but it’s very common for Patreon to not process some members well into the next month, if at all. On top of that they relentlessly fuck with their payment system so it’s possible that the missing members simply don’t know their pledges were denied. As far as I know Patreon doesn’t do anything like, I dunno, telling anyone. In any case it seemed like “we” were on track to get to 1000 by the end of the year, but who knows at this point. The jobs from which my audience tend to come from aren’t as prevalent as they were even 5 years ago. That was usually the way in. Things have shifted much more to being about the adventures of the cast now, & that’s not on accident. Fewer people have retail work experience these days. Especially in the catch all kind of store that Megatainment is based on. I’m not sure if any exist at all now. I know the actual chain that inspired it has been gone for a few years. In any case I guess I’ll just go along as I’ve planned & see what happens. If you’d like to support that the links are above, and in other places about the page. If you’re not in a position to help with cold hard cash just spread the word around online if you see an opportunity. Every new set of eyes could potentially help. That’s all I have for now. End of line.

Oh I don’t know about the derth of catch-all retail.

Grocery stores now have clothing, housewares and alcohol. Okay the booze is a given in the states but it is something new in these parts.

Drugstores now carry enough of a variety of foodstuffs to kill most convenience stores. Except for the occasional corner store in urban environments, they have all but disapeared.

What is left of bookstores – the great amalgamation just before Amazon killing most of them and the independents being priced out by greedy landlords – have THAT coffee shop, less than half the floor space for shrink-wrapped books with the rest being media, Chachkies, toys, giftware and other schlock.

Patricia was my father’s name is the kind of cheek I expect, and enjoy, from Rulette.

“Patricia was my deadname.” That’s better.

I have a literal deadname from before I was murdered by a guy with a pickup truck. True story.

Well, tough-guy actor, john wayne’s real name is “Marion Morrison”, so why not be a mr. patricia?

Well, my daddy left home
When I was three
And he didn’t leave very much to my ma and me
Except this ole guitar and
An empty bottle of booze
Now I don’t blame him
‘Cause he run and hid
But the meanest thing that my daddy ever did
Was before he left he wanted to
Name me…Patricia.

Yeah, don’t I know it about media stores.

The video store is also a dead concept. Family Video was the last of the major chains, and it shut down earlier this year. Government lockdowns finally did what streaming never could.

A guy named Patricia… considering all the genealogy work I’ve done and some of the names I’ve seen, that’s not the weirdest thing. There was one gal named Johnithan who married a guy named Johnathan and they had kids as well as siblings, so their nieces and nephews would have to refer to Aunt John and Uncle John.