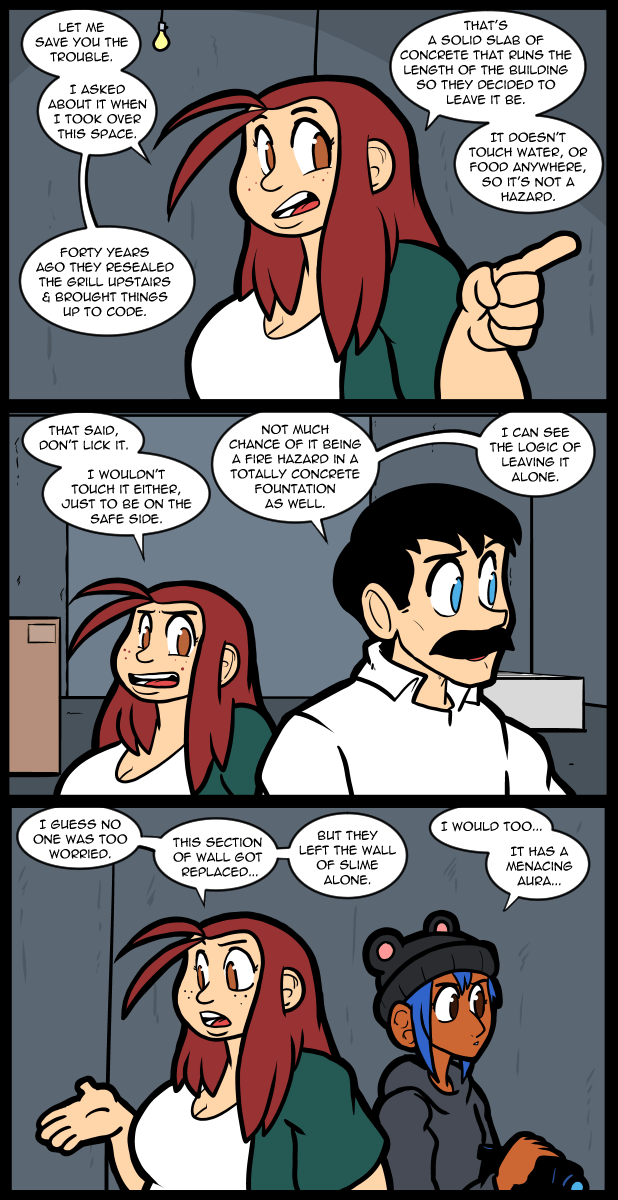 Rulette’s flyaway hairs were supposed to be just a little visual flair at first & I really let them get out of hand. I like how they look & love making the hand motions to draw them, but they make placing her next to other characters way harder. XD I can always change her hair between arcs but usually I think about this stuff before doing it. With her I just kind of did whatever I liked & here we are. It’s not a huge problem, it’s just one of those weird things that happens when you don’t plan things out a swell as you might have. Kind of like how I didn’t plan out how to monetize this comic over time & here I am mentioning Patreon so that people think about it, instead of having some more solid kind of plan.

And maybe keep your son Far away from it. Things have a habit of going up in flames around him….

Besides the heat getting to dangerous levels, all that smoke in such a contained area is way beyond dangerous.

The way you talked about Rulette’s hair sounds in character to me. Like something she would do. That said, she might look cute in some bangs.

“A character of its own” could describe Louise belcher’s bunny ears hat, The Monarch’s eyebrows, or Bugs Bunny’s ears.

I wouldn’t mind seeing Rulette’s flyaway hair bump into someone.

This foreshadowing makes me think that there’s a twist to be had here involving the Grandfather, which could be why things weren’t discovered sooner.

It’s time to just wall up the wall of slime and hope it never moves again. It’ll end up like Armus: Skin of Evil in Star Trek: The Next Generation.

We don’t need no EDUCATION!

All in all, you’re just another slime on the wall!

Don’t everrrr touch the wall!…If you do, the Ghost in the Diner Grease will GET you!
:)

Jo: “But why is the stain shaped like a person?”

…And this is when we find out that Reggie’s Dad, or Reggie’s granddad, is a multiple killer.
“Reggie’s Dad,…WHY did you lure us into this abandoned building, at night, and not tell anyone else where you were going?…..”

There it is – the perfectly ordinary explanation, but still sublimely creepy. The slime, that is, not Rulette’s hair.

40 years ago, you say?
For some reason, that sounds to me like a “key” plot-point, that’ll come back later to hit them all with a REVELATION — right smack between the eyes!
I’m just wondering how the “life-history” of this slimy wall might align with the “timeline” of Grandpa’s bunker-design?
Maybe there’s the seam of a hidden opening concealed beneath that filth.

Perhaps a hazmat-suit & an EXTREMELY acidic solvent might do the trick?
In any case, I’d want to start by looking for some way to determine the precise thickness of that wall, if at all possible.
I’d imagine that disgust might be an extremely effective method of concealment — even better than camouflage.