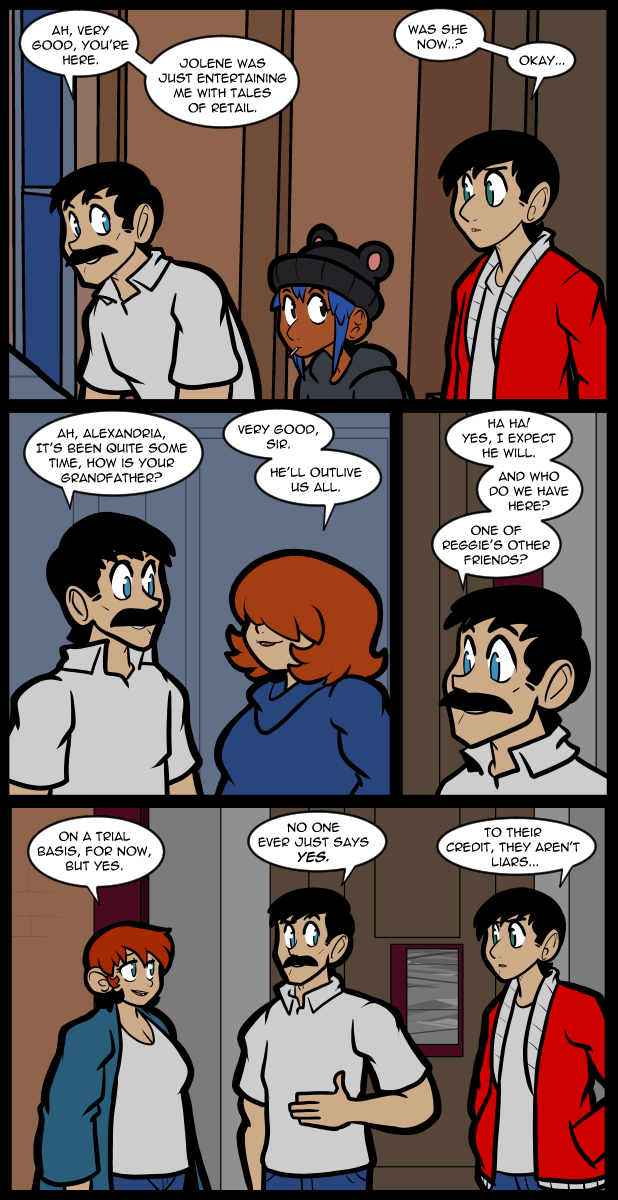 These last few pages have really been prime examples of the kind of humor that I really like. None of them just say yes isn’t a side splitting punchline, but it’s my favorite kind of punchline probably. If I were talking to you I could really break it down, but trying to type it all out is unwieldy. If you get it, you get it, & if you’re down here reading you probably do. Also there’s a good chance you’re a patron. If you aren’t, however, maybe you should think about it. You’ve enjoyed this enough that you want to see what the dipshit who wrote & draw it is saying, maybe you want him to keep doing it. I think there’s a chance at least. XD

The guy who wrote Back To The Future said that part of the inspiration was seeing his dad’s high school yearbook & realizing that he probably wouldn’t’ve been friends with his dad. His dad was a jock, a leader, while he was a gross nerd. In some ways that’s what’s going on with Reggie & Garret. They’re seeing each other more more as people instead of the versions of each other that lived in their heads until now. Reggie isn’t good with people but his dad easily converses with Jolene who is famously shy. They’re very different, but somehow are built on the same kind of base.

You know, this right here is what makes the comic so good. Exactly what you said, we get bpth the snarky punchlines and the new depths of their father-son relationship. Amazing work

It’s the sort of half-snark, half-disappointment that makes that sort of punchline work, and even then it could only work once it’s been established how the two people involved in it are related. That sort of humor isn’t something just anybody can pull off, so you really shouldn’t put yourself down so much. Good writing is just as important as good art, and one can totally make up for the other.

Jackie, you said “None of them just say yes isn’t a side splitting punchline” but that exact line made me laugh out loud hard enough that it turned into kind of a wheeze. It’s very much my kind of humor.

I like your art. You make characters and stories I care about. And you keep hitting the kind of jokes I like. Dang, do you also have detectives spying on me to keep fine-tuning your work to make sure I like it the best?

It was a great line and it worked perfectly. I enjoy all of the character stories you create, and this comic is one of only two I still support financially. Thank you!

On a side note, when I looked back at the class pictures of my youth (nearly 30 years ago), I realized that in grade school I was a nerd but somewhere in middle school I jumped out of that area into the “not a nerd but not a jock” zone. Not sure what happened, other than I found my spots in both music (band and choir) and in sports (cross country and track). So I fit in and didn’t fit in. It was a weird spot. Once I reached freshman, my parents got me contact lenses so I could run without problems, and suddenly I was a little more popular than before. In a lot of cliques in school (band, choir, drama, academics and sports, but mostly because I wanted to get the fuck out of my farming town).

None of my classmates are my friends. None of them. There’s two or three people who were underclassmen that I’m still in contact with, and only one is my friend (I guess we could say his brother is my friend as well?). When I watch Back to the Future, I see myself as one of the people who probably stood idly by in the background. I did stand up for the people who got bullied, but I didn’t have anyone near as big as Biff in my school.

Weird when you look back on your high school years almost three decades later.

Got weird long before that out here. We had a small high school class so I guess that helps. I remember our 10 year reunion. Wild night, that was.

My class has never reunited on its own. My old high school has … multi year reunions. So if it’s our 10th, it’s another class’s 20th, or 30th, etc. So I went to my 10th year reunion with five other grades and I spent more time talking to the upper and lower class people than my own group. In fact, only six of my classmates showed up. And out of the six, I only talked to ONE of them.

My class was notoriously the most hated class in school, primarily because the 10 girls in my class monopolized the volleyball team and took them to state, and then rubbed it in the faces of the girls on the JV team. And five of the jocks in my grade often bullied other kids. I even broke the nose of the star quarterback (he was in my grade) when he tried to beat another kid up in the hallway. The animosity between me and my classmates reached an all time high that when I graduated salutatorian, my speech was basically, “So glad to be going to college far far away from this shit hole of a town and away from most of you fuckers.”

What drives me crazy is August is our 30 year reunion, and the committee is pestering me to show up. Fuck that.

“Very different but built on the same kind of base.” Isn’t that pretty much every father-son combination everywhere? Comparable, even similar, but always with a few extra idiosyncrasies that come from a combination of the mother’s side, the intermingling of the mother and the father, and from the environment? Most of the time, you can tell a father’s son.

Yeah. This is the kind of punchline that has me laughing out loud.

“If you get it, you get it, & if you’re down here reading you probably do. Also there’s a good chance you’re a patron.” *checks marks*

Others have probably figured this out from time to time but the thing that gets me more than anything else, is that I know these people. Or rather people like them, they are in spite of being cartoons, real people with real people reactions to situations. In a word the execution of this graphic novel is perfection, in at least as far as capturing a slice of humanity.

While Garret’s last line is funny, the REAL punchline (to me, at-least) is Reggie’s response.

Him being just a guy here, a dad instead of a father, is the real punchline to me, and it keeps giving.

I do? That’s very kind of you. Many thanks!

Amazon says Wednesday… so watch for it!

I’m pretty sure it’s on the porch.

If only Garret knew how Reggie tended to act superior towards others and belittle them. It would answer so many questions he might have.

Garret calls her Alexandria, even though she’s familiar and friends of the family.

I wonder how much of Reggie’s old-fashionedness politeness he picks up from his dad.

I will chime in and say I also enjoyed your punchline. I am also enjoying your segues into mentioning your patron. I find myself looking forward to how you are going to work it in each episode.