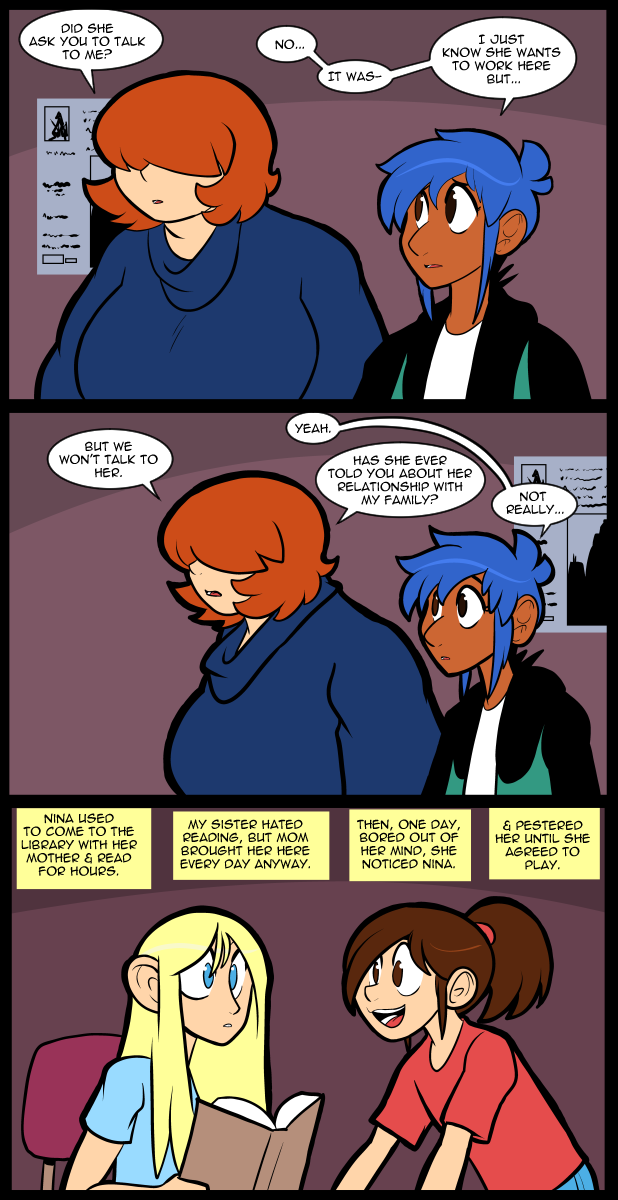 I wrote this backstory in the first few weeks of writing the original story for he comic. Originally there was no connection to Alex, but as more elements introduced themselves over time it seemed like a perfect fit. A tragic backstory that connects a few characters & gives motivation to their actions & reasons for their personalities… All people are united in mortality.

After nearly 15 years it’s kind of strange to actually come to this part of the story. Although the best parts of the stories are the ones I have the most time to go over in my head & hammer out. The original story was in my head for at least ten years before it actually became Between Failures. Getting time to work & rework this will hopefully make it resonate in that way that fiction seems almost more true than reality. In any case, Nina is getting her long awaited focus story. Which will go on for quite some time & be woven into the overall tale for even longer than that.

I think this is one of the few strengths of MWF comics, or just comics that don’t update daily in general. I read this page and instantly remembered that Nina has a tragic past life event, but with the length over which the story gets told, it’s like a surprise all over again.

You’re going to take us on, what the kids would have called it around 5 years ago, a “feels trip”, aren’t you?

Things are going to start all fun & silly & sweet, and the eventual reveal is going to be one hell of an emotional nut-shot, isn’t it?

Well, here’s to our eventual collective emotional breakdowns! (And I mean that in as positive a way as possible)

I promise not to fuck up the emotional moments with fart jokes.

It maybe a thing, about Carlos Mencia:

Doh, I was thinking Russel due to the reference to bad smalls.

That’s not the same as saying there won’t be any. Sniff.

That seems altogether too limiting, but perhaps you, of all people can pull it off…so to speak.

I may not comment much, but I remember being here for the first time this whole situation was briefly, vaguely mentioned. Way back when Nina talked about wanting to work in the library, but not really being able to because reasons thatninvolved losing someone dear. Never really thought we’d be getting to it like this… In this almost trivial way, if you get what I mean. I don’t know what’s coming, but I’m already sad. None of these characters deserve tragedy in their lives.

Thanks for making something that makes me feel so fully for people who aren’t even real, Jackie. You make me feel a little more human, and inspire me to want to look out for people close to me who might be hurting too and may need a little help. To me, your work resounds with the sound of humanity, and does so because it has a very solid core of reality in it. I’ve been learning from you for a while now. Thanks for that too.

I remember this coming up and hoping some day we may get Alex’s family’s version of events. I’m glad we’re here!

I also hope there’s still a place for a reconciliation maybe, but I know that’s not always possible, at least not until everyone involved is ready to reconcile. Fingers crossed, though!

I wonder-
it might be that people in Alex’s family are avoiding Nina, not because they blame her for the accident, but that Nina + other people [remind some of Alex’s family of an event that is too painful for them to deal with…right now].

For example- a couple that I know lost a Mastiff-like dog, to a natural accident.
I think that experience was so dark for that couple, that they’ve never tried to get a big dog, since then. Hm.

It has always struck me, that there is something… odd, funny, other,… about Nina. I hope we find what it is in this arc. I like myself some backstory.

…something like 70 percent of Nina’s skull is eyes and ears. It’s good to see she’ll grow into her features later on, but holy shit, the initial contact is disturbing. :D

Oh my god Nina was ADORABLE!

both of you are very good friends of mine.
Please tell me what might be off-kilter between the two of you, so I don’t accidentally step on the toes of either of you guys.

Yeah, that’s what *I* would be thinking in Jo’s place. Being in the middle bickering (or worse) friends is definitely not fun, especially if you’re typically the one who has to play peacemaker.

Last panel: Little Nina really grew into those ears when she hit her spurt.

I am looking forward to the child versions of anyone in this story.

Oh yeah it has been that long….wow

I’m actually really looking forward to hearing their (Nina’s, and related Alex and her family) story. Sad or not, it’s part of their story. We don’t get to be the authors of our stories, we get to experience them. For better or worse.

I was in a car accident years ago and luckily I was the only one physically hurt. I don’t remember events too clearly…Still, even now, I get triggered* when I hear certain sounds. The panic and pain comes back to me. It sucks because I can’t always predict what sounds are similar to a car skidding, or clashing of metal (even a video of a snowstorm did it for me). If just a sound can cause such strife, I can only imagine what seeing Nina is like for Alex and her family.

*I cringe when people use this outside of actual trauma, and even now I don’t like using it for myself. But I don’t know a better phrase to call it.

Sorry if this isn’t the right place to leave this comment, but I thought you should be aware of this news item – an abandoned old mansion in the heart of Paris is being auctioned off for renovation, and a corpse, hidden for 30 years, has been discovered in the basement! Ring any bells?

This kind of thing happens a lot. I researched several similar events before writing the story.