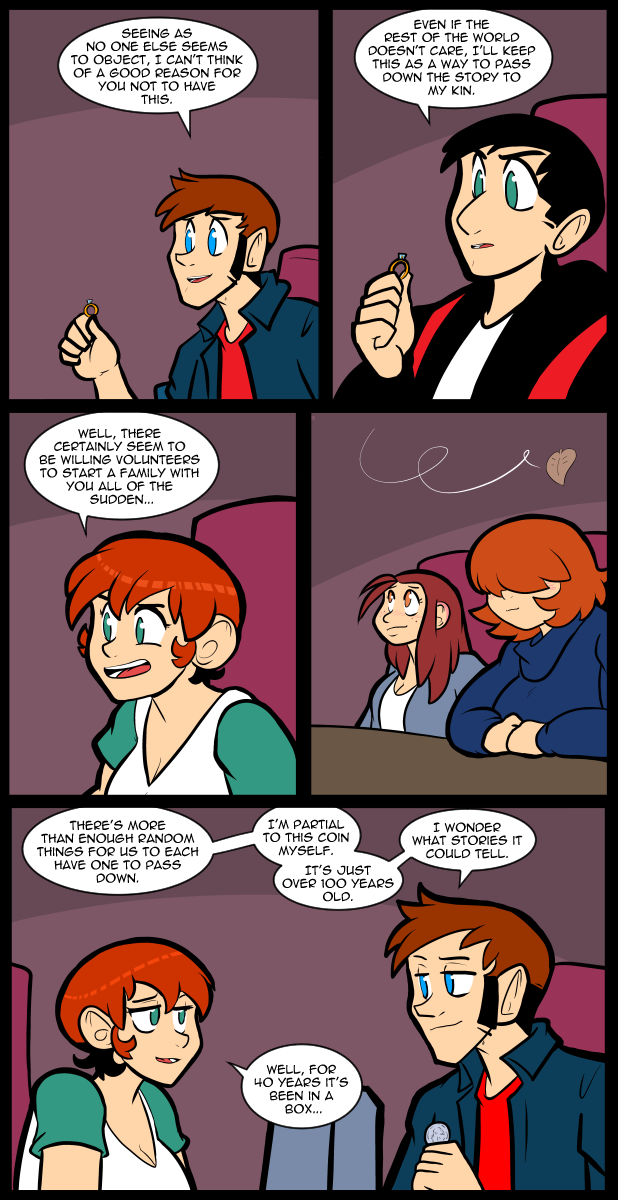 I legitimately debated about putting in the leaf thing because I know some people aren’t going to understand what it is. I didn’t want to have to deal with answering the question over and over because the kind of people who will ask it will never read the comments, or the blog. Then I liked how it looked so I was like, fuck it. It’s a minimal issue & sometimes it’s better to get any kind of interaction at all. I used to leave in spelling errors on purpose just to see if anyone was paying attention because generally the pages don’t invite a lot of commentary, so it was a way to find out. You can bait out a pedant pretty easily so I advise you to try if ever you make a comic & want to see if anyone is reading beyond just looking at your site metrics.

This page probably should’ve been broken up into two, but I decided to just squeeze in the joke at the end in case I forgot it. I very rarely write anything down as far as scripting goes. Not unless I know I want to say something and know I can’t remember it in an intact form. Mostly, & for years, I just do it all in my head over the course of the preceding day. The downside is that if I ever unexpectedly die no one will know where I was going other than the very broad instructions I left in my “in case I die” file. Not that there is anyone to take over for me anyway. Although there really should be. This site does well enough to make someone a decent, relatively stable income. You could do worse than carrying on my legacy, potential inheritors. Although I don’t think there’s anyone alive who could get my particular idiom correct. Mot people don’t even notice things like Brooksie’s nose. I get fanart of her sometimes where she has a standard anime nose & that’s absolutely wrong. She has a defined nose. That’s not an accident. Nina’s teeth are the same way. When people draw her with regular teeth it makes me sad. Anyway, whatever. Hopefully it won’t matter & I can see this story all the way to the end. But you never know, tomorrow’s not promised after all.

I miss Nina wonder what she’s been up to

Same.
We have not seen her for too long

“it was cold and dark”
-old coin

WHERE IS A BURGER STAND??

Well, now I want to watch for intentional spelling/grammar errors just to be…. like…. totally… like… ironic.

Well lucky you, there’s one on this page! Couldn’t tell you if it was intentional though.

I really love Reggie.
I’m not sure how intentional it was- I don’t know much about the writing process for this comic, I know sometimes character arcs are planned in advance and sometimes they evolve along the way and naturally develop, but I love Reggie’s development and place in this comic.
I hope that doesn’t come across as condescending or odd to say in any way- I just mean that regardless of being planned or developing naturally with the narrative, I just wanted to appreciate the growth he’s undergone. I’m sure there might’ve been some blog post that mentioned Reggie’s character at some point- I just don’t remember.

I really enjoy his group dynamic. I also adore Thomas and Carol, but I feel as though Reggie’s really been shining lately.

I don’t usually have anything intelligent or of substance to add to the conversation so I never used to comment, but I really do enjoy this comic and thought I’d share my appreciation this time. Not to say my personal appreciation is anything special or that this was particularly intelligent (it was not), but I decided to stick to “its the thought that counts” as I figured positive feedback is always nice.

I always get excited to find this series has been updated, it’s been a long standing favorite of mine :)

Thank you for taking the time to share. Speaking up is ok and welcome. It’s why there is a forum.

I don’t beleaf I’m familiar with that visual idiom …

Leafing through the results of a quick search was in vein and left me hoping the answer will come blowing in the wind since I’m treemendously short on attention and time right now.

The leaf blowing just needs the subject is out there, but nothing concrete has happened yet. Notice Rulette is looking elsewhere and Alex is looking (well, even eyes covered) intently ahead. It’s just noting that yes, here are two potential people who Carol is talking about.

Though I guess it could also mean that Carol’s comment flew over the heads of the two people who are exactly who she is talking about.

It’s an Animal Crossing emote representing someone getting a chill up their spine.

is it bad that i heard the sound of the emote when i saw the 4th panel?

My money is on representing awkward silence since both girls know Carol is referring to them. Then again English is not my 1st language, so who knows :)

That’s more likely the case as you can see both of them are blushing.

Did not notice that, but my screen just went wonky, so not great for noticing small details. Understandable for the $5 screens I get a garage sales, but I gave about $100 for this one. A while ago………

I thought it was like a tumbleweed blowing quietly, and unmolestedly, through. They’re visibly not moving or responding, and quite deliberately.

Yes, both appearing as quiet, sleepy western towns as a tumbleleaf passes through. Not responding to drama the big city folk try to rile them up with about love triangles and such.

if that was intentional, my apologies.

I’m now analysing all the noses. You do have an awesome collection of different noses. I find a lot of comics tend to give everyone a generic nose, but it’s a pretty defining feature. Well done!

And Nina needs her bucked teeth. It’s why she’s so frikking adorable. Small imperfections* make you much more characterful and attractive.

*as we are fed by lifelong conditioning by the media. Not any actual imperfections.

I was gonna say. Nina is perfect in every way – teeth and all :3

Nina is a very beautiful gal!

Ahh, the classic “whooosh” of a statement going completely over the intended acused’s head, personified into a Japanese visual gag for the purposes of communicating the effect into a medium without sound.

Well, If there Were a soundFX It’s just the sound of one leaf falling.

I’m NOT gonna go all pend-antic here, but I have – since Nina’s introduction – taken the buck teeth to symbolize that rabbit aspect of Nina. and I most seriously don’t mean playboy bunny, rabbit, I do mean her quick wit. She gets some zingers out there, mostly unnoticed by the recipient (but not Thomas – who notices them if not comments on them.).
I also appreciate the ear symbols Differing for each character… although I don’t get the Symbolic meaning of them,…. if there is any.
And thank you for leafing the symbolic fluttering image. Not only iconic and not in vein, but I wasted coffee, … upside is I’m down one paper towel and now have a VERY clean tablet. So thanks!

I have no idea what you’re trying to say, and I think you may have replied to the wrong comment. Or are trying too hard to be witty.:\

Only because you mentioned it. Second Paragraph, Sentence 11. Mot, rather than most.

Oh yeah, could be. Maybe I read too many of Tycho’s blogs on P.A., but I thought Jackie specifically meant the french ‘mot’, meaning ‘word’ as in, “un bon mot.” Essentially that word people wouldn’t notice the art like Brooksie’s nose. It does seem more likely to be [most people], since that’s the far more typical language construct.

The leaf was okay, but a tumbleweed would have been a better metaphor, I think. :D

A tumbleweed Visual, for me, sounds like wind with an ocarina playing the bird-song motif from The Good, the Bad and the Ugly. The single leaf creates an image a one lone guy standing on a sidewalk, whistling, but not any tune anyone but the guy knows; and by alone I mean not cars, no bikes, no peds, no dogs barking, just empty Silent city city – with a guy whistling.
Or like when I open my mouth at a party, and everyone stops their conversation just to glare at me. But that’s me.

That or the tumbleweed is in a contract dispute with the studio and the leaf was brought in to cover for it. :P

Maybe somehow depict the sound of crickets chirping.
I got it. A lone cricket hops up on the table at that moment to start chirping.

What does the leaf mean?

Uh, Alex. John is right there, and you’ve yet to actually go on that date with Reggie. Nice to see that D&D girl is also interested in Reggie.

Question, Jackie – Has Reggie earned a spot in the Comic title banner yet?

It would be more efficient to have no one on the banner now.

I love your character design. (And enjoyed Carol’s delivery of the last joke).

My only question about the ring is: does it have initials Or words engraved on the inside? Has anyone looked to see if it does? Many rings have ititials and dates engraved inside the shank.

lol I heard the leaf in the wind sound effect in my head when I read that panel.

“Don’t worry about it. I’ve written an in-case-I-die file for the ending. It’ll be great!”

In Case I die

Ed and Nina get married in secret.