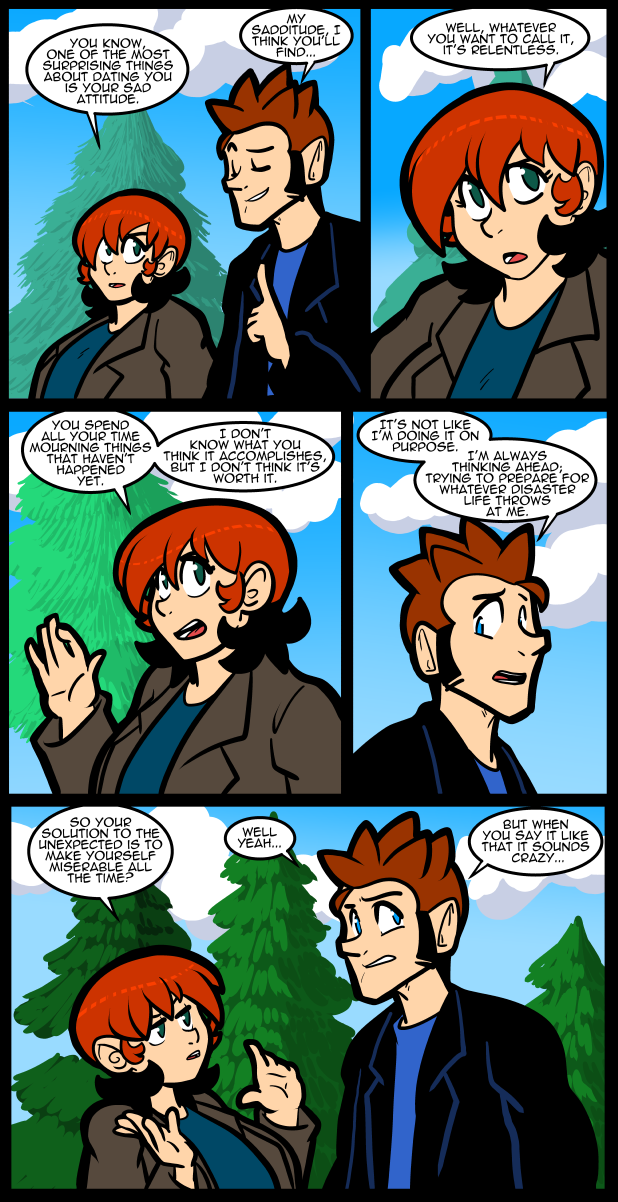 Carol wants more of the confident surface level Thomas & less of the sad inner bitch. This is one of those things where she makes up for a deficiency in him with much more inner confidence.

Maybe he suffers from a form of depression.

Possible, but it’s more likely that it’s related to his general attitude. He’s said flat out in previous comics that he only wants to do the bare minimum to get by and that much of his confidence is a front to make people think he’s competent. That’s classic defeatist behavior, where one convinces themselves that there’s no point in trying because the odds are so small that they might as well be zero.

The problem with this viewpoint, of course, is that any choice to not bother turns it from low odds to zero odds. They think that failure equals wasted effort, but in reality they’re wasting much more effort and energy trying to avoid the choices in the first place than they would actually, you know, taking the chance in the first place. It’s an aversion to change; you may hate where you are, you may complain and gripe and wish fervently that things are better, but you won’t actually do anything to change your situation because it’s comfortable. It’s familiar. You don’t want to take any risk.

It’s an incredibly common mindset in this day and age, and society at large only encourages it.

Because where you’re going could be so, so much worse.

And that’s the attitude that gets nobody nowhere. It COULD be worse, but it COULD also be better, and if all you do is err on the side of the glass being half empty, that’s defeatism.

I would highly recommend checking your language and your hostility at the door, friend.

Common sense has more to do with anticipating what could happen and adjusting your actions accordingly, and less to do with expecting the worst and acting, or not, based on the worst outcome. Defeatism may seem similar at a suface level, but the attitude and motivations are entirely different.

For example, a defeatist sees a penny (or other low denomination coin) on the ground and leaves it there because, by itself, it is only worth it’s face value and it’s not worth picking up. Someone using common sense picks up the coin because, 1) enough pennies equal a dollar and you might already have others saved up and 2) it cleans up a piece of litter from the ground. There are other, better examples I’m sure, but that’s what came to mind at the moment.

Also, I doubt any one person is exclusively a defeatist or exclusively uses common sense, so it’s more of a generalization of attitude than a personality trait. Thomas is just good at personifying that attitude right now and Carol is commenting on it, partly because it probably annoys her, but mostly because she cares and thinks he should change it. How that impacts their relationship remains to be seen, but I look forward to seeing how they resolve the conversation.

Err, I think you’re mixing up common sense with adaptation philosophy. Common sense is simply a measure of one’s ability to intuit the correct course of action without prior exposure to the problem or needing to be shown a solution, i.e. it’s common sense to clean your dishes instead of letting them sit because you realize they’d get moldy if you didn’t. Adaptation philosophy is a reactionary viewpoint where you pre-emptively adapt to and prepare for predicted circumstances so that the blow will be softened.

ENDG4MER, if you were to look at world affairs on today’s stage and how it affects our generation and what we’ve been brought up on, you honestly can’t blame this generation for the attitude that they have.

We’ve been brought up to believe that helping one another and making a difference would help steer the world in the right direction. The reality? Nothing is worth making a difference for unless money is involved. It’s not about principle, it’s about the almighty dollar.

Also, negativity gets the most attention. Nobody pays attention to positive people because negative people are more entertaining.

If you want to prove me wrong, go right ahead.

Why would I need to prove you wrong? You can say that the rest of the world is corrupt, the system is broken and say, “Okay, I shouldn’t bother with anything because it makes no difference,” if you want to. That just shows your limit as a person.

Myself, I treat people better than that. I may not be able to affect the system as a whole as one person, but I also don’t need to. I’ve been an example to several people who, in turn, treat others better as well. That’s an exponential growth right there. Sure, there’s no guarantee that your example won’t take root, but I’m also happier and it doesn’t take any more effort than expecting nothing to make a difference.

You can feel free to give up. It won’t affect anyone.

But I won’t. I’m just stating my views as is. I wanted to test you to see if you were willing to challenge it.

I’m not going to challenge your views for you. All I will do is set an example; you can choose whether or not to follow it.

Well of course he”s sad all the time….

And yet Goku doesn’t seem to suffer from that mind set.

Goku is in competition for the title “Worst Anime Hair Ever”

Too bad Yugi Muto has him beat out of the starting gate. ;)

My vote for Bad Anime Hair goes to (Mr.) Bobobo-bo bo-bobo!
(Where do the writers of B get their ideas?) Huh.

In this video, he’s the guy in the blonde hair + sunglasses:

The nice part about being a pessimist is that you are constantly being either proven right or pleasantly surprised. –George Will

Everyone always says that, and yet, look at Thomas in this strip. Optimism is not all about expecting the best, but also finding the silver lining and making the best out of what does happen.

I don’t think anyone is truly a pessimist every single moment of their life. Sometimes, when positive things do happen, they’re more than willing to let their pessimism take a backseat so they can revel in the opportunity.

Well shit, you just outlined a conversation that my ex had with me when we were together.

“A ‘cynic’ is what an idealist calls a realist.” –Sir Humphrey Appleby, ‘Yes Minister’

“An asshole is what people call a cynic/pessimist who mistakes their perspective for reality” -me, just now

“‘Weak’ is what people call a low-effort restructured quote used as a comeback to said quote.” –Most People

“So your solution to the unexpected is to make yourself miserable all the time?”

As opposed to being blissfully unaware and reacting to life, instead of living it?

That’s precisely how I’ve described my own outlook for 30 years.

“Inside every cynic is a frustrated idealist.”

It’s the easiest way to become a cynic.
Be an idealist, enter a broken world, find out it’s broken, try to adjust your expectations and adjust them further them lower than your surroundings.