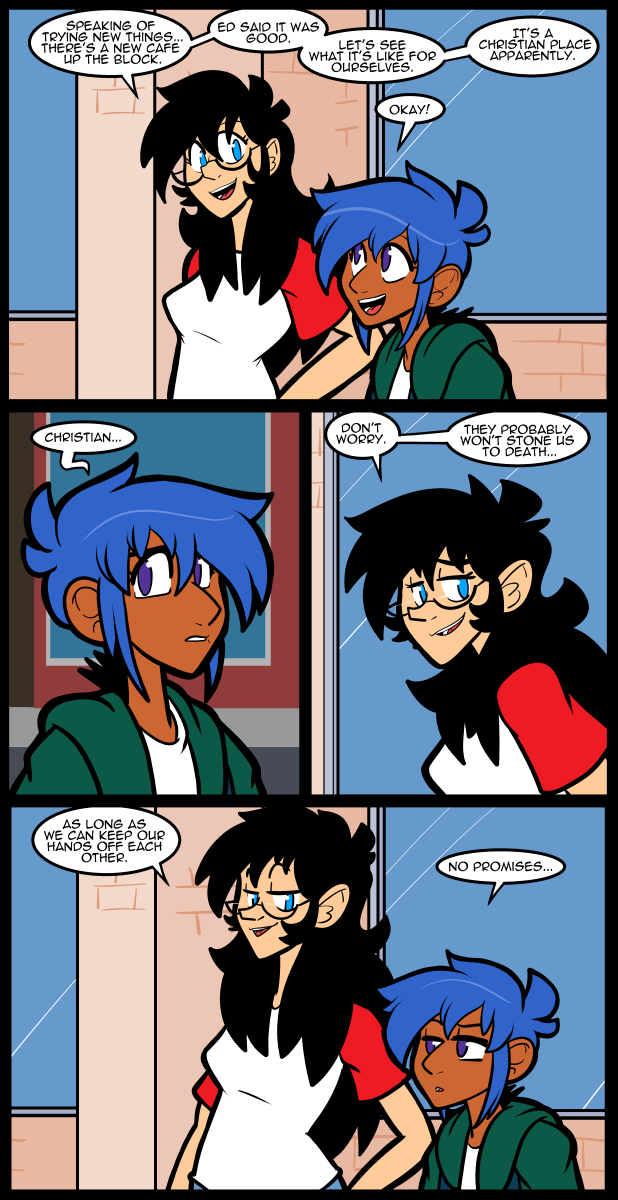 Say what you like about Christians, but they very rarely stone a person these days. Most you’re usually gonna get is a disapproving look & maybe some snide comments. As a religion they’re pretty chill on the whole. Some people mellow with age, maybe that goes for belief systems too. Of course we already know that Ramon’s little shop embraces all the forgiveness of Christ & not much else. If you’re gonna pick & choose a few aspects of a prophet to follow you could do worse. Clearly Jo has some grievances, but we’ll get to those in time.

I know it’s pointless to say this, but if you feel attacked at any point during these next few pages maybe hold your tongue & let things play out before you throw a tantrum.

Oh boy. Putting these two in the same room as Ramon and Evrina promises to be fantastic.

This will most definitely be entertaining.

I don’t think Ramon is the type to hate anyone, i.e. a Christian in truth as well as name. (A test that I myself fail most days, to be perfectly honest.)

So I don’t anticipate trouble. But we shall see.

It’s not trouble I expect so much as slightly bewildered attraction. I’m curious to see whether Evrina ever finds out about the connection between them and Nina, too, considering that she seemed more than a little aroused at being called “little mouse” again.

I think Ramon and Evrina probably just WORK there, because they have to do something to get by – just like almost everyone else in Jackie’s godforsaken town – and aren’t really the devout Christian types themselves.

I mean, Evrina herself has led a furry meeting, which any true Christian would consider some form of degeneracy… however, but if they have to follow the cafe owner’s rules and kick them out, is a completely different thing. We’ll see how it pans out.

Wasn’t it established that Ramon owns the place?

Yeah. Ramon’s put his life savings into setting the place up, even though he had no idea how to run a business.
And then God sent Evrina to help him figure out health codes and business permits and finances. At least, that’s how Ramon tells it.

And as soon as I give up on finding the [citation needed], it turns up. Go figure.

I thought stoning was more of an Old Testament thing. Burning heretics used to be a popular pastime, but not so much in the last few hundred years.

People tend to get carried away when they have an overwhelming majority in… anything, really.

Also a fondness for the aforementioned stoning/BBQ guests personal property.

We also almost never blow up buildings! Or buses. Or random chunks of real estate.

The US Navy and/or the US military has, what they call- a 2% a**hole factor.

Meaning- if you look at any Navy, or group of people, that has 100 or more people in it, you will have 2% of them be- a**holes, mean spirited dorks, mean idiots, idiots, + the like.

I think that that 2% just gets into groups, as a fact of human nature. [ To me- This also includes 100 ppl., or more, who get into a theoretical religious group.
Not that I’m making excuses for people who act like a**holes, mind you.
That 2% just seems to happen, in groups. Or as the film[s], Men in Black, says- a person can be smart, people are dumb. *shrugs*

Human nature or not, I still don’t see what good it is for someone in this day and age to even feel the need to be an asshole. I mean, who are you trying to impress here?

I don’t quite understand that. Are you asking me about something?

OK, I think I get it. you were asking a question[s] to theoretical people.

Back when I wore my psychologist hat the number that was quoted a lot was that about one person in thirty has significant sociopathic traits. If you allow for those who cover it well that matches pretty close to the two percent cited above.

Yeah. I can see that.

Y’know, that last paragraph is damn good advice for just about any medium.

I don’t know. Jo sounds like she wants to be a bitch there now. “I’m gonna do what I think will cause trouble.” is how I’m reading it.

Looks to me like she’s debating with herself whether it would be worth it.

Reads more as a jest to me, just one colored by weariness and apprehension meant more to steel her nerves than to elicit laughter.

speaking as a southerner. No, christians are not chill.

Compared to olden times. They hardly ever stone people to death.

The people Guiltaur speaks of would, if they thought they could get away with it.

Of course, I would not call them Christians in fact, whatever they call themselves and however they think of themselves. Anyone who reads the New Testament and comes away with a vicious mindset has missed the point and needs to start over from the beginning.

Eh, I live in a southern bible belt town. Hardly anyone cares about me being gay. Heck, I get more flak for being a guy in the food service industry because “that’s a woman’s job.”

Trying to categorize Christians, especially in the southern U.S. is like herding cats in the middle of a thunderstorm. Christianity has been spinning off sects since just after the crucifixion. Through the years I’ve met preachers who would happily perform a marriage ceremony for a gay couple all the way over to people who would throw the first stone.You get everything from mainstream mega-churches to flat earth creation sects with fewer than 10 members. Aside from claiming an origin in the teachings of a Jewish heretic 2000 odd years ago the beliefs of these various groups have become so diverse that to label them all under the heading of Christians has become almost meaningless.

You would think a religious practice like Christianity would be so ironclad through Jesus’ teachings that the forming of different sects would be meaningless but apparently not.

All that being said, I think Jackie’s point is accurate. As a resident in the U.S. I don’t spend a lot of time worrying that I will get stoned because I said that this fish was good enough for Jehovah.

Which beliefs? The ones Jesus taught are pretty good, but may need to be adapted for culture chznge. The ones that have attached themselves through 2000 years of church politics peehaps not.

According to the TCP/IP version of the Bible, there’s a verse for that.

”
Matthew 7:21-23
21 “Not everyone who says to me, ‘Lord, Lord,’ will enter the kingdom of heaven, but only the one who does the will of my Father who is in heaven. 22 Many will say to me on that day, ‘Lord, Lord, did we not prophesy in your name and in your name drive out demons and in your name perform many miracles?’ 23 Then I will tell them plainly, ‘I never knew you. Away from me, you evildoers!’
”

Or perhaps
”
John 2:1-6
1 My dear children, I write this to you so that you will not sin. But if anybody does sin, we have an advocate with the Father—Jesus Christ, the Righteous One. 2 He is the atoning sacrifice for our sins, and not only for ours but also for the sins of the whole world. 3 We know that we have come to know him if we keep his commands. 4 Whoever says, “I know him,” but does not do what he commands is a liar, and the truth is not in that person. 5 But if anyone obeys his word, love for God is truly made complete in them. This is how we know we are in him: 6 Whoever claims to live in him must live as Jesus did.
”

There’s apparently SEVERAL verses about living the life being far more important than wearing the label. It is almost as if they knew there would be loud evangelicals who proudly proclaim their faith while ignoring all the tenets of said faith and warned everyone to ignore them.

Usually, that’s referred to those who are agnostic.

It’s not a mellowing with age effect for Christianity; it’s more an effect of enlightenment era and modern liberal values.
There were times in history where Islam was considerably nicer than christianity on average.

If you look at christian groups in subsaharan africa things look a bit different.

On average, christianity tends to be one of the less chill religions (with a lot of variation by sect) historically, but more chill recently, still causes a lot of problems though. admittedly religions can not be truly disentangled from the societies they’re mostly found in, which makes it hard to rank.

On the internet? Yeah, that ain’t gonna happen…

I work at a Christian-run eatery, and I must say that we’ll sell you food whatever your race, creed, ethic or religion. We’re in the business to sell food.

But if you ask me about the Bible verse on the reader-board, be prepared for a calm, but intense discussion.

Isn’t that sort of the point of asking after such verses? Some of those chats can be pretty fun, and help us heathens see perspectives we might otherwise go unexposed to.

When an adulteress is brought before Jesus, He says,” Let he who is without sin cast the first stone.”When they’ve all left with downcast eyes, he says,” I also do not judge you-go and sin no more.” (simplifying) But of lawyers, he says,” Woe unto you also ye lawyers, for you lade others with burdens impossible to bear, and touch not those burdens with one of your fingers.” I figure if Jesus speaks against your profession-and did not feel it necessary to speak against adultery (and told a thief on the next cross that he’d be with him in heaven) there’s something there. My sympathies to those 1% of people in the legal profession given a bad name by the rest.

True that. Lots of people, including many a professed Christian, have failed to understand that when Jesus said all those things about peace, love, forgiveness, and so on, he didn’t just say it, he meant it.

I used to be on Brooksies’ shoes. I hated Christians because of a small subsect of people who ruined things for me. Over time I’ve come to terms with that through growing into an adult combined with a passing study of theology. I find most Christians do not know their bible very well, and often forget how to both accept their brother and forgive him.

Approaching Christmas one year, we were given the exercise to read a chapter in the Gospels (Matthew, Mark, Luke, John) each night. It went pretty well, and when we finished that part, we all said,”I don’t see any reason to quit.” We read a chapter together most nights, and are on our second run through. We’ve jumped around a little this time. You really absorb a lot more actually going through the book-learn the parting of the Red Sea was not an isolated incident, learn that you disagree rather strongly with some things done or said by Paul or Moses. Find that some parts of Paul’s letters read like an Abbot and Costello routine.(Who’s on First?)

(This comment is me remarking on how this implies some people still get stoned. I don’t think anyone has been stoned recently, but please corect me if I’m wrong.)

It still happens in the Middle East with relative regularity. Also being burned alive & other torturous execution methods.