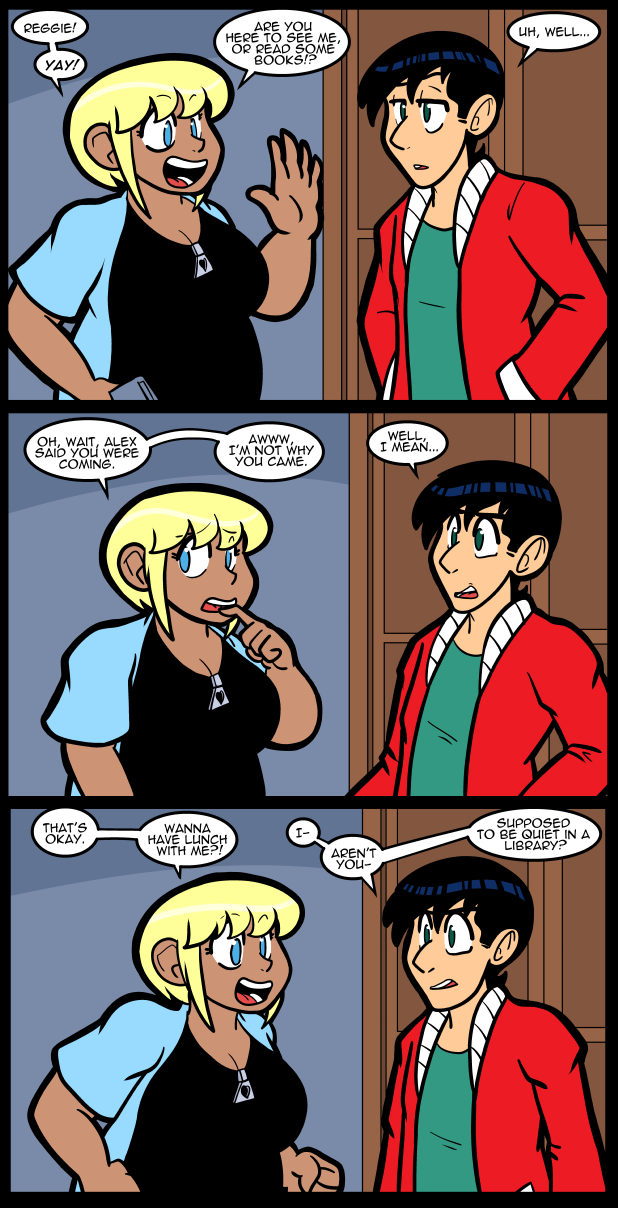 Reggie really doesn’t know what to make of Maddison, but I think he likes her in spite of himself and herself.

I was sooooo sick yesterday. I got that weird dizzy barf bug again. I don’t know from what but it was bad. In fact, I’m still feeling kind of crappy, but I’m past the worst of it. I spent most of yesterday in bed, watching Bob’s burgers and Clerks animated on DVD. At one point, when I couldn’t lay down anymore, I inked the comic and did some patreon stuff. When I finally got up to make dinner I was well enough that I wasn’t wobbling all over the place. I think I’ve disinfected all the things that I might have picked it back up from but I honestly don’t know. My sinuses were the most inflamed they have ever been last night. It looked like someone struck me over my left eye. Hopefully this is the last time I have to live through this stuff.

In other news I decided to buy a yoga mat to see if it would be an acceptable surface to sleep on. I’ve tried all kinds of things but nothing works for floor sleeping, which I have to do to keep my body lined up at least 3 times a week. I found a cheap one and it was pretty comfortable. not as hard as floor, but still firm enough to keep my parts in order. I don’t know why I never thought of them before. I guess because I’ve never seen one in real life before now. Honestly I kind of wish the entire floor was covered in yoga mat. it’s very pleasant to walk on.

Reggie, stop being so loud.

Jackie, another thing that might be good for sleeping on the floor is a self-inflating camping pad (Thermarest). It’s open-cell foam in an airtight skin, with an air valve. You can pressurize it with a few breaths. Mine is an inch thick, and I think they make thicker (and maybe wider) ones. Much more comfortable than an air mattress or unpressurized foam, and luxury compared to a yoga mat.

Certain depths of shag carpet are also pretty soft to walk on.

When I was in Japan, the floors were covered in tatami mats (woven grass). Reasonably soft to walk on, but you sometimes needed slippers to keep it from cutting up your feet/socks. When coupled with a native futon (essentially a double- or triple-thick quilt) laid out on the floor (like futons are supposed to be :b) it made for some pretty firm sleeping. Don;t know how practical that would be for a mid-western USA dweller, but at least I got to mention Japan again…

I think Maddison is going to become everyone’s Mai Waifu because how can you not love such a sunny personality?

I just really relate to Reggie, he is a lot like my younger-self. I really find Maddi quite attractive, and I would have, too, as a younger self, but her Level of Sunshine would have put me off, cause a little bit of loud is fun, but running at 11 all the time is exhausting to be around.

As good as sunshine is, gimme tall and nerdy over short and bubbly.

Has the idea been floated that perhaps you have an inner-ear infection? The symptoms you’re describing can be caused by that.

Dunno if you’ve already considered it as an option, but Amazon has twin size futon mattresses for relatively inexpensive. I bought one for spare guest sleeping, specifically for a certain guest, as that’s all she sleeps on is a futon mattress on the floor. But a yoga mat is going to be lighter and waaaaaaaaaaay cheaper lol

Nice work on the yoga mat. That has to be helpful.

Also, Maddison continues to grow on me.

It’s like Maddie is unintentionally bullying Reggie with sunny enthusiasm.

Reggie’s such a gentleman, keeping eye contact for three panels.

By the second panel, I would probably be staring at her cleavage and wondering how that zipper works.

I think Maddison should changer her name to: Maddaboutreggie.

I can second the thermarest, as having just enough cushion/firmness for me.
Another suggestion, the snap together, kids foam floor squares sometimes found in Goodwill stores and other used goods outlets. I like those cause I can break them down, throw them in the bathtub and give a good scrubbing as needed. Very close to tatami.speaking of which, we used to stretch canvas over ours at the dojo for a smoother surface, but had to take canvas off every few months and scrub it outside, dry in the sun.