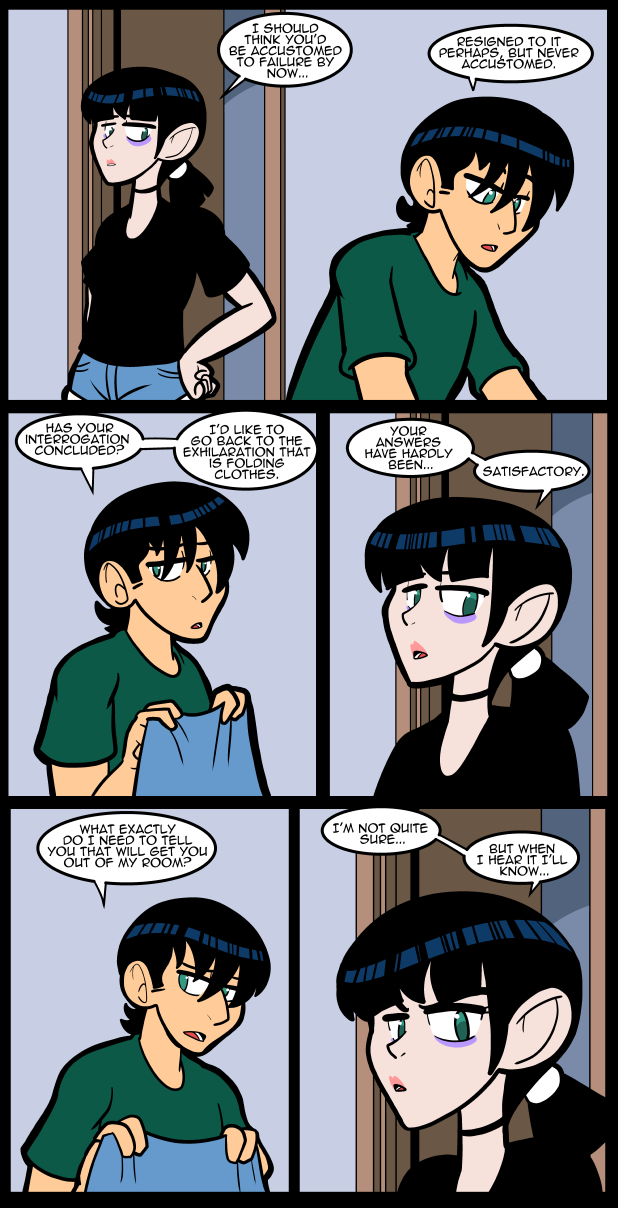 The internet has decided to fail this evening. Of course it happens on the night I decide I might allow myself to play some Splatoon since I’m sort of feeling okayish. The comic has to be loaded via the better connection my phone has. It’s not very good for much else, but it’s good for emergencies at least.

Unsolicited Advice Time! With the caveat that I am a dropout Psych student who narrowly missed the family curse of a cornucopia of fun mental illness adventures, from schizophrenia to depression. So, I’m biased.

” I’ve been voicing exactly what makes me afraid for years and it hasn’t changed anything. I just find it hard to accept that the addition of paying someone to listen is the panacea I’ve been missing in my life.”

A good psychologist (this may or may not apply to therapists, where I come from they are different and have different skills) does more than listen. They can help you find out why you feel the way you do, change your thought processes to prevent harmful thoughts, etc. Talking to a pro is a lot different than talking to a rando-no matter how well meaning said rando is.
In many cases it’s beneficial to have both therapy and medication, but as you’ve said, it isn’t an option for you at this time.

There’s a book “house of cards” about how little difference there actually is between talking to a pro and talking to a random person off the street.

Hello, having suffered from severe anxiety and depression all of my life, and having been through 15 different medications at this point, I felt very much the same about counseling that you do, so imagine my surprise when it actually helped. The counseling took place 3 years ago and is one of the major factors why i am still alive.
I would strongly suggest trying counseling, it certainly wont make things worse.

I wish I could win the lotto so I could help you out Jackie. Hell, I wish I was in a position to give you any money to make your life easier.

Your work got me through some dark times, And I suspect a lot of other people too. Just keep working just be patient something will change wish I had better advice. But know this no matter what has happened in life you have created something that brings Jo to many people. You’re an artist no one can take that away

Indeed, it does bring Jo to many people, and that is something to be grateful for.

Look at it this way: You’re already telling us about your issues, it’s just that most of us don’t have the training to do anything for you with that information. Telling someone who is qualified to help you won’t be that much different. Heck, ask the therapist if they wouldn’t mind just doing an archive dive on your blog posts. Couldn’t hurt. Stay strong Jackie. We’re all rooting for ya!

I feel like I’m watching Wednesday and Pugsley: The College Years.

Have you ever tried meditation? “mindfulness based stress relief”, MBSR, is a training program which shows decent evidence of helping with anxiety.

Victoria is seriously rocking that up-do.

Glad you’ve got an appointment to see the doctors, Jackie. I hope they can help you out.

I wish you well, I do enjoy this coming

Regarding people who want to help, I think this would be a great topic for a Black Mirror episode.

Here’s hoping you feel better soon. Who knows, maybe the change is right around the corner for you!

This comic is one of the things that makes me happy. Those are few and far in between. I am starting to forget what it feels like, but this helps keep the memory fresh. So thank you, buddy. I hope you get the help you so rightfully deserve, for bringing a little joy into a shrivelled prune of a heart.

I’m amazed how well you’ve done with your comic despite your health, Jackie!