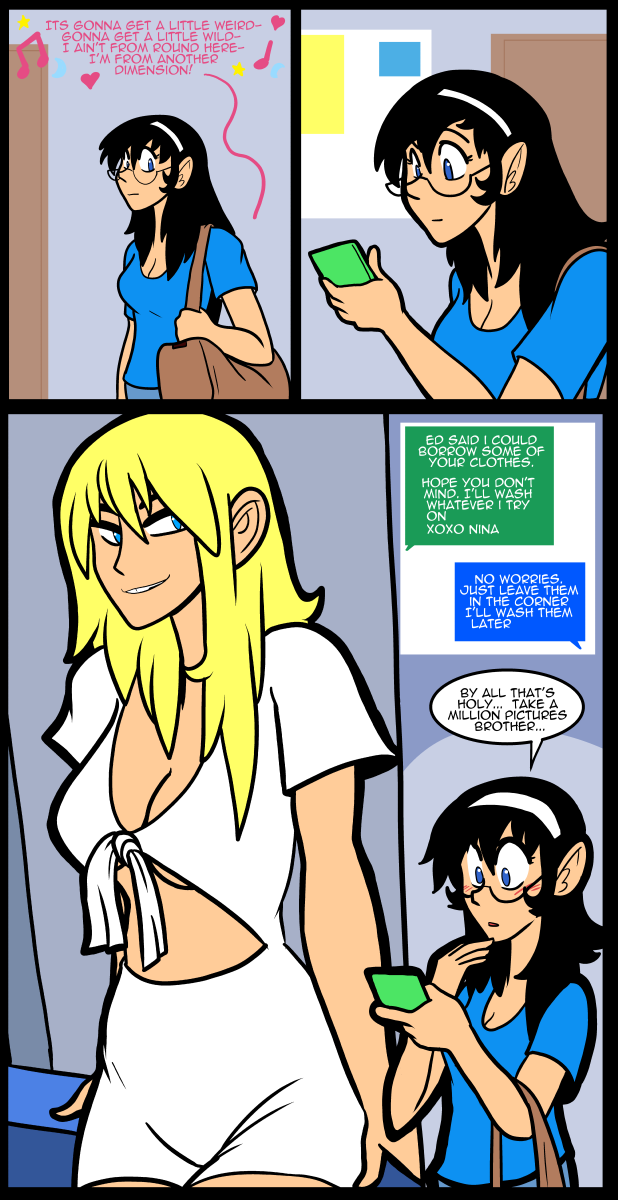 Jessica’s ringtone is the theme from Star VS The Forces Of Evil A show I’ve only seen snippets of, but I’d really like to see the whole series. It seems like it has some really good stuff in it. In a weird coincidence one of the characters is named Jackie Thomas. I think that song would make a really good ringtone. It does suit Jessica too. I’m pretty sure Jeffery Tambor is a voice in the show too.

The dress I used as a reference for Nina’s was, like, a floral pattern and was really busy. I don’t like florals in real life and I sure as fuck hate trying to draw them. Then I tried a bunch of colors, then I just went with white.

Ed is probably getting a new pair of pants after taking the first photo.

You think he can get them off?

I don’t think he had a choice.

I think tyersome meant cause he was glued to them

Actually I had a different mode of sticking in mind :-)

I don’t know which I find more terrifying: “Just woke up, bead-head” Nina, or “I’m gonna eat you for lunch” Nina.

Now here’s a man able to rise to the occasion!

When Nina is both of those at the same time.

Love parallelogram! You’re really angling for the out-of-shape squares with that one …

I think Nina is doing a lot of [squares]…at least two that are brother and sister. : )

I wasn’t aware she’d gotten ’round to doing either of them?!

Heh, heh. maybe soon.
No one know the angles like Nina.

Do you mean she has a degree in angles?

I don’t know.
But Ed seems to admire her measurements.

Heh, heh.
I hope that he won’t be obtuse about Nina.

I think he’s probably sharper than that, but I agree it could be acutely painful to watch him miss the point …

Star vs. The Forces of Evil is very good, you really should check it out!

Star v for is the best! But you want to start at the beginning. Starco ftw!

To describe Star Vs. The Forces of Evil…

Imagine taking a VERY ADHD girl from another dimension, that knows NOTHING about Earth and the cultures here, has magical powers, feed her buckets of sugar, then turn her loose on an unsuspecting junior highschool, put her in the home of an otherwise normal Hispanic American family (with the son as her guide) with the two of them (the girl and the son) traveling to many other dimensions having adventures with her rather odd other friends.

Oh, and she sometimes fights against some semi-evil creatures from her home dimension. Forces of Evil and all that…

Overall, an insane frenetic compilation of insanity that is way more addictive than one would suspect.

Ed is a lucky lucky man…

They just had the season 2 finale, so you got to.e to catch up.

If you have a chance, watch that show. It’s truly something else.

That’s because it ain’t from ’round here, but from another dimension

All I ask is that if this leads to a fashion montage, we get Nina in the Virgin killer sweater.

It’s now a competition of who faints first between Jess and Ed.

How to I get on that phone tree?

Not only is Tambor a voice actor, but so is Michael C. Hall. He’s responsible for one of the most genuinely frightening lines by a cartoon villian…well, anywhere really, but definitely in the Disney universe.

Exactly. That’s what I was thinking!
Nina’s white outfit reminds me of the 1940s singers, The Andrews Sisters, or something. : )

With that ringtone, what does it mean for the Between Failures timeline? How much time has actually passed from the start of the comic to now?

Now that’s what I call a ringing endorsement ;-)

Pretty sure time is moving exactly at the speed of plot.

@Crave: You want another “weird coincidence”?
I once dated a girl named “Jackie Thomas” back in highschool.

i watched all of star vs evil, and it’s a good show… once it finds it’s footing. there are a quite a few episodes in the first season that don’t really work, and it still has a scene or two that is a bit too trope laden, but it is overall a very excellent show.

Even to see her putting that outfit on would be a sight worth seeing. The libidinous thoughts are overflowing now, but then there was already sex in the air. This will be a good day and great evening for the Nina and Ed.

Id like to see that reference photo, I dont mind florals.

I….actually have that song as a ringtone. I ripped it from YouTube and converted it to .ogg for my phone (I have an Android).

I’m not sure “modelling” is the right word for that picture! It’s… um, breathtaking! :o