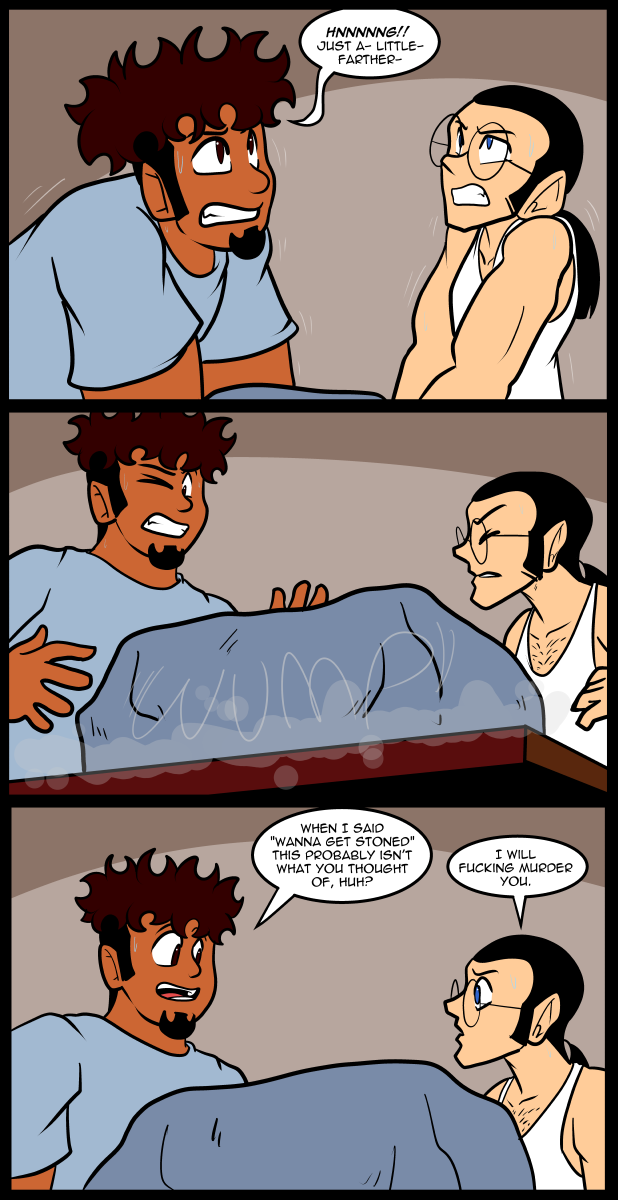 The story continues. This thread started way back on page 1267. Jessica showed Jolene an old town curiosity that set off a chain of events which leads us here.

I certainly can’t say that nobody cares what happens to the comic. A ton of people commented and contacted me in other ways to make sure I wasn’t ending it. XD Maybe I wasn’t clear enough in my post. In any case you’re stuck with me for the foreseeable future. Thanks for all the support and encouragement over the last few days though. It’s nice to be reminded that people enjoy what you’re doing from time to time. It’s fallen out of favor in our culture to be supportive of others, but I appreciate you taking the time.

Last week I randomly watched a video of the Haunted Mansion ride at Disneyland. I’ve never been to any of those parks, and I don’t really want to, but I’d kind of like to ride that ride. Nobody has taken a decent video of it, so I only have a shaky video camera idea of what it’s like. I’ve always liked haunted stuff, so that’s the one thing in all of the park I actually find interesting. From what I’ve seen it’s not very scary, and it shifts in tone wildly at the end.

There’s a whole industry of people who just make videos of Disneyland. The dedication to it is fucking wild. One dude sounds like SpongeBob, but he makes pretty comprehensive videos. Livefastdiepoor is his username.

Anyway, as you guys are well aware of I like supernatural nonsense. Which is why I desperately want Lego set 10228. It’s retired though, so it’s like almost $500 after market. I really wanted it when it came out, but I wasn’t doing very well at the time, so it wasn’t possible. It’s still not possible now that I’m doing better at that price. XD Anyway, the set looks almost exactly like the Phantom Manor in the French Disneyland.

Lego does sets like that every so often, I was hoping that the Scooby Doo theme might get a similar build, but there haven’t been any new sets announced. The haunted house they made for Scooby is less epic and more cartoony, obviously. It’s not retired yet, I think.

Just the ghosts from Lego sets go for $10. They added a few new ones in the blind bag sets, which was cool. I’d like some more classic ones though. That way I could maybe build a really spooky haunted house out of parts I already have. I found out you can get certified as a Lego artist and I totally want to know how to do it. You can get special deals on bulk legos to make stuff. XD

Teen Corner
well hello interweb world miss me yet? I dint think so. I’m not sure I have anything new and exciting to tell you. now that its summer and I have no life I am constanmtly freeting about the future. I have come to the conclusion that I am not ready to be a senior or an adult at all. I’m taking some senior pictures Friday and I keep trying to convince myself its not a big deal but the voice in my head is like THIS IS A LIFE DECISION. ridicuolose I know but that’s me for ya. I also realized this is my last summer before I graduate and its already flying by and I’m still here doing nothing. and then I’m like I need to do things but I can never decide what to do. I even made a list of adult like things ill need when I move out so my birthday and Christmas gift list ideas are just going to be things like plates, silverwear, kitchen utensils, other things adults use! so that about sums up my life recently in a paragraph.

Well, this comic got off to a rocky start.

He’s just making a boulder out of a pebble.

We shale not speak of this again.

Only if you stop rubbing basalt in the wounds.

These puns are fracking ridiculous; I feel so sick I barely have any apatite left.

Of quarts you all go for the rock’n puns already. I suppose we will need a stratus-gy to continue them. I coal dibs on the next one!

This is a marbleous thread, someone should take on the Sisyphean task of adding to this cairn of puns …

Look at all this sediment of puns. You’re putting a lot of pressure on the next guy, he might have to gypsum-one else’s ideas.

As long as they aren’t pyrite-ting somebody else’s joke. This pun line has been tumbled to death.

Seems like a pile of schist to me. :D

Dang!
I came too late to the pun party!
All the good puns are taken!
I’ll stop my a-LEDGE-d wisecracking, right here. :D

So use the bad ones! I lava when the comments metamorphose into a slate of terrible puns.

Whatever shale I add to this list of jokes? It has to be good, of quartz.

Found this back when I was in middle school, and I graduate high school tomorrow. So, this comments section is likely neither the time nor the place, but I’d like to thank you for putting in the time and effort. Your writing definitely shaped who I’ve become thus far in life. On a less serious and more topical note, that pun rocks. Can’t take joke-writing like this for granite, friends.

This was me when I was asked to help my older brother move for the 3rd time in one year.

If you ever do go to Disneyland for the haunted mansion, do it around February. Lower crowd levels, and hopefully by then they’ll have converted it back out of the “Hoilday theme”. Normally I’d say go around October, but apparently they started putting the Christmas decorates up by the end of September for that ride.. It sucks cause I haven’t been on the “Original” since I was a wee babe.

No one has a good video because it’s truly a dark ride. It’s very hard to get any kind of photos out of it, much less good video. Camera phones are not going to cut it. I suppose someone could use an IR video camera, but then you’d see all the hidden stuff that makes it work, too.

We finally picked up the haunted house a year or so ago. Still too high then, but if you hang out on ebay and brick forge long enough you can find one for slightly less… :/

Ah, the Haunted Mansion? I’ve actually got a special CD they made for one of the anniversaries of that ride. It’s got a bunch of pre-production audio from the making of the ride, classic 1960s radio advertisements, sound effects and music, but the key attraction is track two.
Track two contains the complete audio loop for EVERY room in the Mansion. Including each section of the “Grim Grinning Ghosts” graveyard finale, broken out into individual parts. It’s over twenty minutes long, much longer than the actual ride.
Oh, and it also has an unused, alternate English narration of Disneyland Paris’ “Phantom Manor,” as voiced by master of the macabre, Vincent Price. It’s a pity that French laws required them to use a French narration on the actual ride.

Jackie, would you like copies of my mp3 files?

I can say with some confidence that a number of readers here would be interested in those files BUT this is the states and the the RIAA and MPAA are more dangerous than a bushel of rabid hamsters.

For a quarter of a second there seeing sweaty men groaning in the first panel had me think something lewd was going on.

Guess that says more about me than anything but I can’t be the only one!

Everybody must get stoned

To the soon to be former teen – Some of us never adult, we just play one to the outside world to varying degrees of success.

If you are beside yourself on what to do this summer and are already putting together lists, may I suggest yard sales and visiting every sally-an shop you can get too. Even if you don’t actually buy anything it gets you out of the house and doing something while meeting weird people who go to yard sales.

We all may be getting older but we can still be immature.

As my dad often says, “Growing older is mandatory. Growing up is optional.” That’s why I plan to be a kid in an adult’s body as long as possible. It’s awesome some of the stuff you get to do as an adult that so many stop themselves from doing just because they think they’re supposed to act a certain way. It’s true there are times to be serious. But the times between rock and I hope everyone here finds those times as well.

Be sure to stock up on ramen noodles for those lean times when you can’t afford them. (been there…)

I’m afraid if someone got decent video of one of Disney’s rides and shared it, the Big D would come after them with hammer, tongs and lawyers. Of course they would be justified, because if anyone actually saw the ride footage, they would instantly and permanently lose all interest in visiting the park, let alone taking the ride. Right?

Nope. Disney world is still one of my favorite vacation destinations. Everything about the place just seems to say “quality”. The place…it’s like it’s impossible to not feel joy there, so much so that you don’t care how much tickets cost, it is worth every penny.

Love the subtle “WUMP” in panel 2

If that’s a gravestone, Mike might just get buried if he pushed the puns.

Hey I just realized something … Carol is really helping Mica, he’s got boulder!

Ha hah ha!
Really, I’ve gotta get off the internet, now!
These great puns are making me yell out loud. Fun! :D

You mean you don’t live here? I’ll have to chalk that up under the ‘you learn something new everyday’ column.

Here is the [best] video that I found, of the 2009, Florida version of [ The Haunted Mansion].
This is a hobbyist’s video.
Please take a look:

Here is the Disney video:

XD I see we frequent a channel in common there in the first link.

In Nail’s voice: “Whatever.”