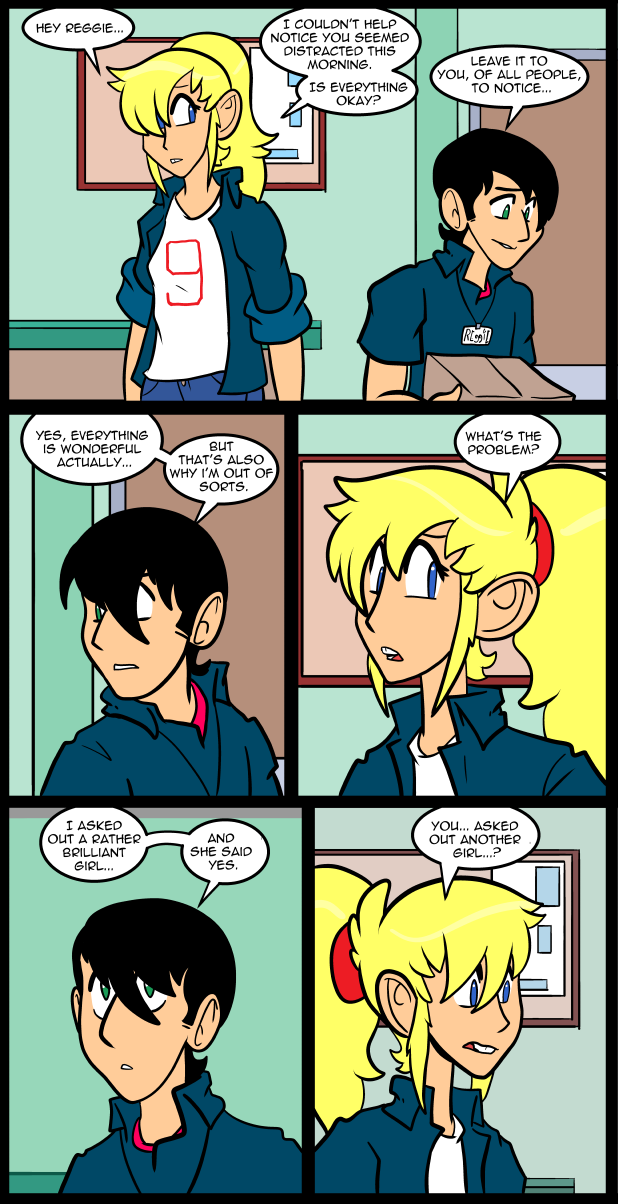 Oh shit, Nina has to deal with some feelings she didn’t know she had.

Remmeber that guy I talked about the other day; the one that I put a bit of in to Wes? His sister in law was one of the girls I made Nina from. She and her sister were both very tall, and very blonde. She was nicer than her sister though. She didn’t however, work in books, or have any particular interest in reading. That was another girl. I actually dated the one who loved to read so much that she did it on the clock. I still think that’s a pretty baller thing to do in a book store. Alphabetize with one had while reading with the other. I quite foolishly dated/romanced coworkers from time to time. It causes nothing but trouble and you really shouldn’t do it, but I have a dick and it sometimes gets control of things. And don’t misunderstand this, it’s a bad for both parties. I am just a big a fuckbag as anyone else, so having a relationship with me at work was stupid too.

The girl who read (which would be a good title for something.) was high most of our relationship and I could never get over it. It really bothered me that she had to be high in order to cope with everything. It started to feel like the only way she could have any feelings for me was if she was stoned. She was also from a deeply religious family that had given her a few issues that were tough to get over as well. In a rare move for me I broke up with her first because I realized this dynamic was never going to change. I did it in the worst possible way though. Via a smiley face post it note. She had driven away and not let me say my piece so I stuck it on a pile of books and left it on her door.
I have to say that the meanest part of my sense of humor still giggles over the idea of a break up note on a smiley face post it note. As I’ve clearly said, I was hardly blameless in the affair. I couldn’t just let things be, or leave things unsaid. Plus, I always get attached faster than the people I’m with. I go from zero to totally devoted in 60 seconds. The fact that I was able to logic my way out of that relationship was a new thing for me. Before then keeping a cool head long enough to make the best decision, even though it wasn’t what my heart wanted, was unthinkable.

Some of my friends are still friends with her, and they’ve never told me she was dead, so I assume she’s fine now. I’m not sure who dodged the bullet in this scenario but I tend to think it was her. I doubt that I would be where I am now if we’d stayed together longer, or as long as now. She was a step on the stairway to my ultimate failure. I needed to stumble over her so I could just keep falling. She was still a few flights up from rock bottom though. At the time I was her least worst option.

Did his hair always do that?

it probably should have but I didn’t hold to the rules.

everyone who skips over this really needs to click the link

John Green — ‘The venn diagram of boys who don’t like smart girls and boys you don’t wanna date is a circle.’

Seconded. Holy crap that was awesome.

I thought that too.

Jackie man. Jackie. “Step on the stairway to your ultimate failure”? Your use of language is fantastic, and come to Albuquerque, New Mexico. I will buy you a beer or whatever and give you a hug. Only shallow people, I think, really let go of the past. Deep folk, if you will, acknowledge the past helped shape and define us, and we gain the strength by shouldering the past and carrying it with us. I salute you sir, friend I have never net. And I thank you for sharing you with all of us.

Nina suddenly realizing that being worshiped from afar, even by Reggie, is actually kind of nice.

I met someone once who had so many childhood issues, that even though she was away from them finally in high school. She still needed to make use of the in school drug dealers for marijuana so she could stay high.

She made straight A’s, remembered everything she studied after graduating, and stopped smoking joints somewhere around 2005.

I can understand Nina being like shocked at Reggie asking someone else out. But being upset I don’t get. She pretty much told Ed she and he where going to be or are a “thing”. At least that what she lead ED to think. So why be all Reggie didn’t ask me out upset? Be Thankful at the fact she and Ed are getting together won’t cause more drama between Ed and Reggie and move on. Thankful you missed that bullet. And If her and Ed getting together dose cause drama w/ Reggie it can be pointed out the Reggie is seeing someone. so whining for him stopped being an option. why making thing harder then you have to?

I’m sorry, but not all hearts work that way…

I’ll probably word this wrong since I’m no where near as good with words as you, Jackie… but. You’ve covered many facets of the emotional and relationship spectra far better than pretty much any writer I can think of. You are to matters of the heart as H. P. Lovecraft is to fear & the deeply unsettling.

You’ve clearly gone through an unfair bit to get there, but damn are you good at it. You are no failure, sir.

I thing Reggie is growing up and Nina realizes that he may no longer idolize her.

Regarding the dating coworkers thing: I know it’s not recommended, and can get messy if things go south, but I also know many that have met their spouses at work. It’s high risk/high reward.

Dating co-workers is a lot less risky in environments with high turn-over. In that case, if it doesn’t work out there is a significant likelihood that one or both will be elsewhere in the future so the awkwardness is more short-term. I know someone who was the supervisor for the TA’s at a university and met her husband when she was supervising him. If it hadn’t worked out, they both would have graduated and moved off to separate lives in a year or so. The good thing is that since they were both in the same major, they started out with at least one shared interest. Likewise, co-workers sometimes can start a relationship based on their shared experience of working the same place. I’m not trying to convince everyone to date their co-workers – just pointing out that it isn’t ALWAYS such a bad idea.

Poor Nina — losing one of her worshipers like that. B{)}

I’m all over the work/relationship thing. I’ve only had one work out, and that dissolved long after both of us had left the job at which we had met. The others have been disasters, from minor and mild to major and maddening. Bad plan, overall.

My current relationship started in the building I work in, but we met in the cafeteria and she works a few streets over.

Regarding the co-worker you previously dated: I’m very sorry you had to deal with caring for someone with addiction. It’s hard enough when it’s a realtive, so I can only imagine seeing someone the heart chose slowly destroying themselves, and deciding that an altered state is better than real life, in spite of the fact you are a part of that reality. Ugh.
On the bright side, you did make me remember Chips Ahoy! by The Hold Steady, so that’s good.

Art goals: bangs logic like this, this level of subtle expression

Thank you for sharing so much with us. It takes a lot of courage to make decisions like the one you made to break up the relationship, especially if you are easily attached (I’m the same way, tending to feel strongly for people rather quickly). Going against what the heart wants is never an easy thing to do, but I’m glad you made the right choice for both of you. I’m proud.

The former cheerleader is losing her last fanboy. You’d think a boyfriend would be enough, but what can you do?

I really hope in the next comic Nina gives him a big hug and a ‘that’s great!’ because for some reason I feel like that’s something she’d do in this situation. =3

C’mon, guys…why assume Nina is *upset* that Reggie asked someone else out? This is *Nina*…she’s more likely confirming the good news before she has a squee-fit. She’s probably going to drag him somewhere to dress him up and plan a double-date with her and Ed, and telling Reggie to reserve the china patterns for the wedding. With everything we have seen and know of Nina, I don’t see how anyone…much less so many commenters…could imagine she’d be upset or have her ego bruised or whatever. Sure, next couple comics could be her all mopey and “I never realized how much your interest meant to me *sniffle* No, no, Reggie, go, be happy! And I shall always think of you as The One I Foolishly Let Get Away *sob*…”

Then she becomes a webcam girl, stripping off her clothes for the approval and accolades of faceless strangers in order to reclaim her lost validation.

Yeah, guys…that’s just what Nina would do, huh?

I like the idea, but J has always been pretty spot on with facial expressions, and Nina’s is that look of a heartstring you didn’t know you had being tugged on.

Didn’t realize you had issues with near-instantaneous devotion too, Jackie-o. I feel you on that- I broke off a relationship with someone my heart was set on, because i was rebounding hard out of a failed engagement, and didn’t want to end up doing something stupid and/or selfish that’d hurt her.