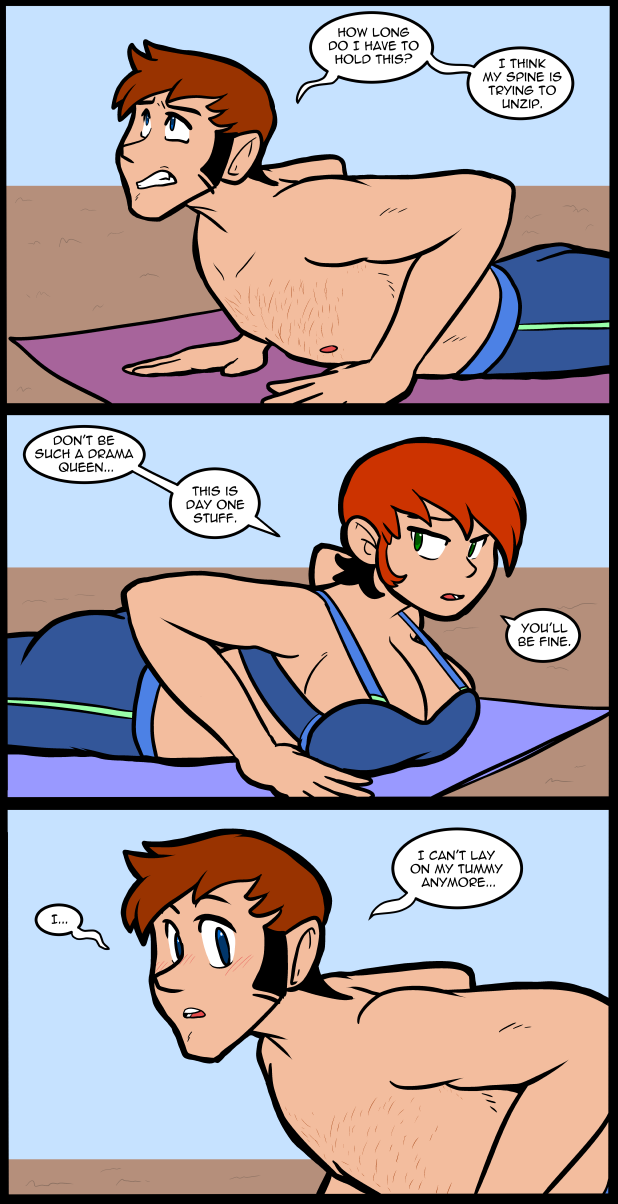 I watch a lot of random stuff while doing the comic. Of course, when I say watch I mean listen to. It was Game Grumps at one point, ASMR sometimes, ghost stories, etc. It changes over time. Eventually I hit on yoga videos. The reason I like them basically is the same as Bob Ross, or ASMR. They tend to be people speaking softly in a calming way. I even tried a little and decided that it was a low impact enough exercise that Carol would like it. It fits her former dancer persona. I suspect she might also do tail chi. Of course she does the in her own way, basically minus the magical horseshit that people ascribe to the practices. Also she’s not a very good teacher. She lacks a certain amount of patience and empathy which shows in her work as well. Being a manager is similar to being a teacher in many ways and I think its pretty clear from past events that she is not a good manager. She lets anger and arrogance take control too easily. She’s good at her job, but not as good as teaching it to others or inspiring them. With Mike and Ed she got lucky and managed, in spite of herself to make friends. With Reggie and Wes she made enemies. One could do worse than a fifty percent success rate, but it’s hardly ideal.
Hopefully Thomas will temper those flaws and also benefit from them. He lacks many of the positive aspects of Carol’s flaws. Passion, for example. He’s directionless. He doesn’t commit himself to his job. Which is not to say that you should be a slave to work, but Carol takes pride in doing her job well. Even if you are unsatisfied with your job it’s good to take pride in the work you do. I know that can seem like opposing views, but that’s being human for you, right?

I tried to go to the store yesterday, but didn’t get very far. Even after dark it was so hot out I almost instantly started to run down. Since I haven’t been able to buy petrol I decided to cut my losses before I ran too low to get to town eventually. The closest fuel station just changed hands, so I don’t know how well the self serve pumps are working. I know the card readers inside are messed up still. Apparently they are trying to work through all the problems, but there were a lot left over from the previous owners. This doesn’t surprise me. The place was always sort of falling apart. They have their work cut out for them. Unfortunately for me this makes the location an unknown quantity for a while.

My leg is looking pretty normal till you get to the ankle. From there down its still healing. It swells if I’m on it for very long, or upright at all really. All I have to do is elevate it and the blood rushes back out though. It still has an effect on my blood pressure though. I can stay on it for thirty minutes or so without sitting, if I’m cool, but anything much past that and I have to get it elevated. In the heat it’s almost instantly too much and I have to retreat. Even in a relatively well cooled store like Gamestop I can’t last long, and once the feeling hits it hits hard and I have to rest. The recovery time for being upright in the heat is a lot longer too. My body tries to trick me by feeling fine for a few minutes then it just goes into a spiral and I have to quickly try to Harrison Ford it onto a golf course.

I’m pretty sick of not being able to travel on my own terms, although it keeps me from driving into town for junk food. I don’t like the feeling of being trapped, but I like not having to take the Teen places when she has some ridiculous whim. Pros and cons.

As instructed here is the go fund me link. I want to give a huge thanks to the people who have given so much, especially the most recent anonymous donation that was so huge. I hope I am successful enough someday to throw down that kind of bank for the unfortunate. The generosity I’ve been shown is amazing. I may not have the most readers on the web, but your quality is second to none.

Thank you for all the work you’ve done. I hope to see many more in the future

Taking pride in your work is a very important part of doing well. No matter how you feel about your job. It’s one of the foundations of the renown Protestant Work Ethic. As is giving $7.50-an-hour work for a $5.00-an-hour job (increase the amounts proportionately for your particular situation).

It may almost be time for Thomas to begin laying on Carol’s tummy….

Your mind and mine must be in the same gutter…

Count yourself lucky, Thomas. Carol can’t lie on her tummy at all.

Oh, she can lie on her tummy just fine, what she can’t lie on is her chest, at least, not without really arching her back.

For shame, Thomas. It should be “lie”. I suppose lack of blood flow to the brain could be a reasonable excuse though.

Little bit of both really…

…So when will this be expounded further upon?

Soon we shall hear a crack from his spine.

If we don’t hear a “squash” from his crotch first.

That brings back mammorys.. i mean memories. I had an ex girlfriend built like Carol that I took working out with me. It was excercises on machines but the affects were the same…. the post workout was much more enjoyable and very needed. Lol

So, is Thomas’ modified Cobra workout pain, or actual pain? Because yoga can do some serious damage if not done right.

If you enjoy yoga videos, might I recommend Rodney Yee? He is by far my favourite when I’m not being lazy.

It’s Thomas being a little bitch pain. He’s fine, just being a baby.

I really cannot blame Thomas for not being able to lie on his tummy any more. It’s too hard to do, looking at her like that.

It’s probably not doing “ballcano” any favours either.

I practiced tae chi for a while, its hard work, takes a lot of leg and core strength because you have to slowly do these squat and balance moves. Basically they are like forms in any other martial art but more demanding in that you have to hold the positions, which are usually somewhat strange, for long periods of time.

As for watching massage videos on youtube, have you seen that crazy blond girl who does all this “harmonizing her energy” with the person she’s massaging, which basically involves her moving her hand’s like 6 inches away from the client’s back for like 15 minutes? Like I don’t have any issues with people believing in chi or ki or chakra (depending on what language to which you subscribe) but when you get to the “energy forcefields of emotion outside the body” territory, I’m gonna start thinking you have issues. And if a person charges me for fifteen minutes of “harmonizing our energy fields” unless I’m getting something really special at the end, then we is gonna have words.

And back to the furry club we go!

Eddie Valiant: You don’t know how hard it is being a man looking at a woman looking the way you do.

Redheads. Gets ’em every time!

I started learning yoga when I was in 5th grade, and still retain a little. I had a girlfriend who was into it when I started working in IT, but we went our separate ways more than 20 years ago. It’s useful for relaxation and stretching, but I wouldn’t attribute great powers to it.

I find that it is a good counterbalance to weight training, do the workout, then finish with some yoga, good cool down and stretching to help the muscles recover. The spiritual stuff, I tune it out. Same with tantric practices, I try to extract the useful bits out of it while ignoring the spiritual silliness.

Ah! Back to the main attraction! If I had more extraneous body parts, I’d give one for a Carol. Probably would anyway.

I hope your health issues are fading into the void. I have had problems with my legs swelling up and they gave me compression stockings to wear. They look like something my grandfather would have worn but they work. Sadly I am an aging pensioner so my funds are limited but I click on your link every day. (several times)

There was talk of a compression stocking but the doctor decided the leg was healing fine without. The foot still seems to be swelling too much for me but he said it would do it for a long time. I need to keep losing weight.

Re-read where you said carol might do tai-chi… you wrote tail-chi. Which makes me think of our resident furries, alex and victoria. I can now imagine them all suited up and doing tai-chi together with carol wearing cat ears going “you know this shit isn’t magic right?

I know the next comic is almost up, but still… That is some epic cheesecake