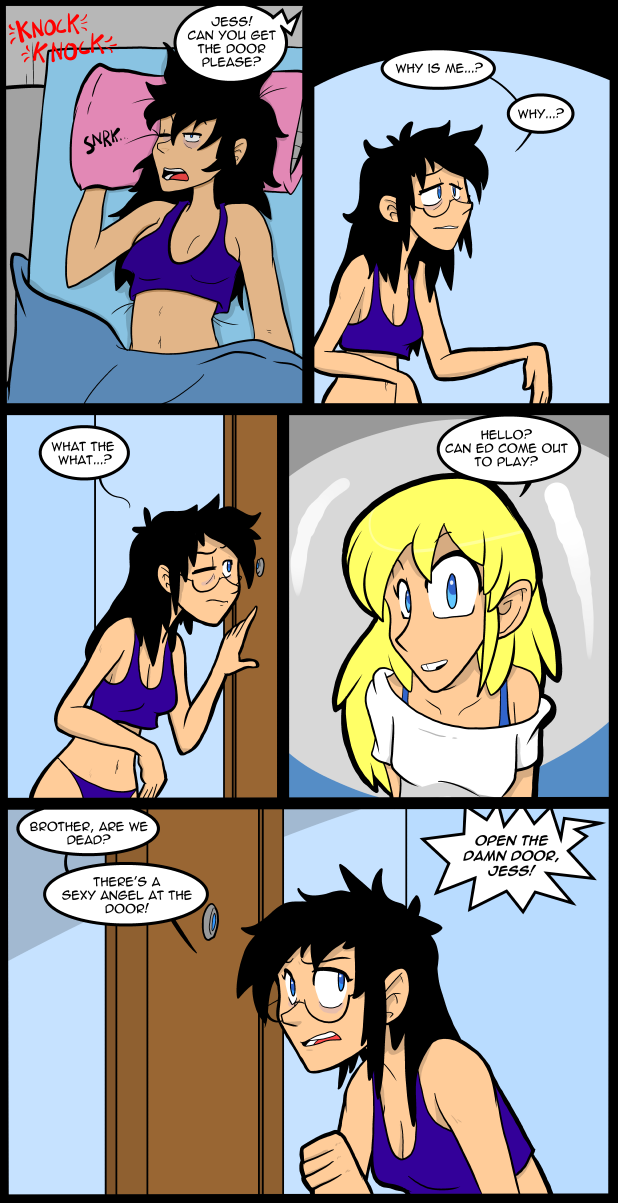 If you don’t follow me on social media got back one page to see the bumper image for this part.

This story idea is OLD. It goes all the way back to the conception of the strip. I wanted to have several threads work out well before I ever needed them, so I wrote more than I needed. Since then I’ve explored some stuff I didn’t plan on, but it’s all worked out just fine and now we can get back on to this particular track.

True to her character Jess isn’t bothered by the idea of answering the door in her smallclothes. In fact the characters are generally okay with their bodies. Of course if I looked as good as they do I’d be okay with mine too. I mean some of them have expressed issues, but on balance the cast is comfortable in themselves. I suspect that Mike worries about his weight, but it’s never come up. Carol does too a bit, but also revels in the advantages that being bigger has given her. Jolene would like some more boob if anyone has some to spare, but she’s hardly obsessed with it. Ed is about as bad as it gets because he’s very sensitive about his height. Apart from that though he’s fine. He’s a buff little nerd with a good mind. What’s not to like?

The day I’m typing this is the last day of school for the Teen. She is having a slumber party. So I am holed up in my room, far from that potential disaster. At this point I’m just waiting for the sounds of food being delivered. After the ruckus fades I’ll make a run for it under the cover of darkness, or blankets. Whatever is handy.

Hmmmmm.. Am I the only one hoping that’s a queen sized bed and Jo’s on the other side we can’t see?

Aww yeah! I was wondering when this arc would be taking place!

Finally! Time for the ship to sink or float!

The best part of waking up, is NINA in your cup?

Out of curiosity, is it just a coincidence that your Ed has the same name and body issue as another famous Ed or was that done on purpose?

On another note; yay, more Nina!

Since I don’t know who you are talking about I’m going to say no.

From the series Fullmetal Alchemist the main character, Edward Elric, also has problems with his short height and will just fly off the handle if anyone makes mention of it.

My Ed predates FMA by a couple decades. XD

How do you reckon that? Full Metal Alchemist came out in the early 2000s.

damn, you’re in for the long haul. here’s hoping that i will as persistant in my artistic endeavours.

To be fair the characters in FMA may have been around for ages too if we’re counting unpublished stuff.

Sure, but in the context of Jackie being influenced by the FMA Ed, I think it’s safe to say that unpublished FMA wouldn’t have influenced him. :D Unless Jackie has a hitherto unknown telepathic connection to anime/manga authors and artists…

Search your feelings you know it to be true…

He is a little skinnier though; he’s the halfling to our Ed’s dwarf, and while they’re both musclebound, Elric’s is lean. This Ed? 100% beef.

Very lovely depiction of Jess as one of the walking dead in panel two. I can certainly relate, especially when the awakening is involuntary. Also, you did a really great job with seeing Nina through the peephole. The magnification and distortion is spot on, even if it makes Nina remind me slightly of Earthworm Jim.
But it is a little unusual to see Ed asking please given his usually rougher manner, especially with someone he should be so familiar with.

It’s important to be polite when you really need a favor.

I can’t wait for Nina’s response when Jess opens the door!

It would depend on whether Jo was there or not.

Maybe … but Nina is going to see a sexy zombie female Ed (Has she met Jess before?) … I predict hilarity…

If I heard that there was a Sexy Angel at my door, I’ll be zipping to that door like Sonic! ????

I’ve gone fast. It isn’t something you gotta do.

I wouldn’t recomend running at the cover of darkness or blankest, one of my best friends as kids was running at my house and hit himself so bad he bounced his head on the wall and fell
and I don’t think I need to explain the blankest

and how badly does Jess needs her glasses
I don’t bother to look for them unless it for tv or I’m heading out
is she that blind?

“That blind”? Well personally, I’m very short-sighted, which means I can see things clearly within about 20cm of my nose, and beyond that they start getting fuzzy. I can navigate through the fuzziness without my glasses, but I really prefer not to.

I’m pretty darn near-sighted, but even when I wasn’t as near-sighted as I am now, I would’ve grabbed my glasses to answer the door. Especially as a female with a brother who might or might not be able to assist in my efforts to defend myself if the person on the other side of the door turned out to be hostile. Better to be clear of who’s on the other side of the door before opening it – and that takes glasses.

At first I was going to write it off as an exclusively Boothe-family trait, but today we have Jess referring to Ed as “brother.”

Is that a common thing over there? I live on the east coast and we always refer to our siblings by their name when addressing them directly.

Or is it just Regina and Jess exhibiting their flair for the dramatic?

Side note: are you planning on adding other characters to the cast page? Or do you plan on limiting it to “core” characters as to avoid spoilers?

The only reason I haven’t updated the cast page is time and having changed the servers. I don’t know for sure how to update the page anymore because when I moved to the hiveworks servers I lost access to the brains of the site the way I know how to do things. I’d have to learn a new way.

I think it might be a common thing, at least it is where I am from.

Once again, I applaud you on capturing the humanity of your characters. Jess looks how I feel in the morning.

Does Deviantart count as social media for the dispensation of special comic update knowledge? That’s all I have for a “social media” site.

Nina, how can I put this?

I’m sorry. You can’t look at me like that anymore. I’m already married.

You took brooksie! leave us nina! Also that is possibly the best wake up ever. well if nina was calling for me instead of ed. Nina alarm clocks should be a thing. Can we fund this?

This one can comment now? Wonderful. I think I like the term small clothes. I may try adding it to my vocabulary. Also, I’d probably die of a massive nose bleed if I saw that through the peephole. Stupid sexy Nina.

No, no.
Brilliant sexy Nina.

Oh, this page has so much good! Sleepy Jess in her smallclothes (I didn’t know anybody this side of the Big Soggy used that word except Cousin Barnstable and me). Nina drawn through the optics of the door lens (Power to the Peep-hole!) peeking back.

And the dialog! Yeah, I used to go out with an angel (she could have posed for this album cover), so, yeah, Jackie. That works so well!

What did you excpect, Jess? Jehovah’s Witnesses?

I’m not at all surprised by her surprise.

Nina would be a great way to wake up.

Jess= Living proof that just because you look good most of the time, does not necessarily mean you’re a morning person.

You deleted my shit? fag.

I thought shit usually got flushed.

She’s incoherent. The full thought is “why should I have to do this”, but it came out as “why is me”.

Great job on the perspective in panel 4, Crave.