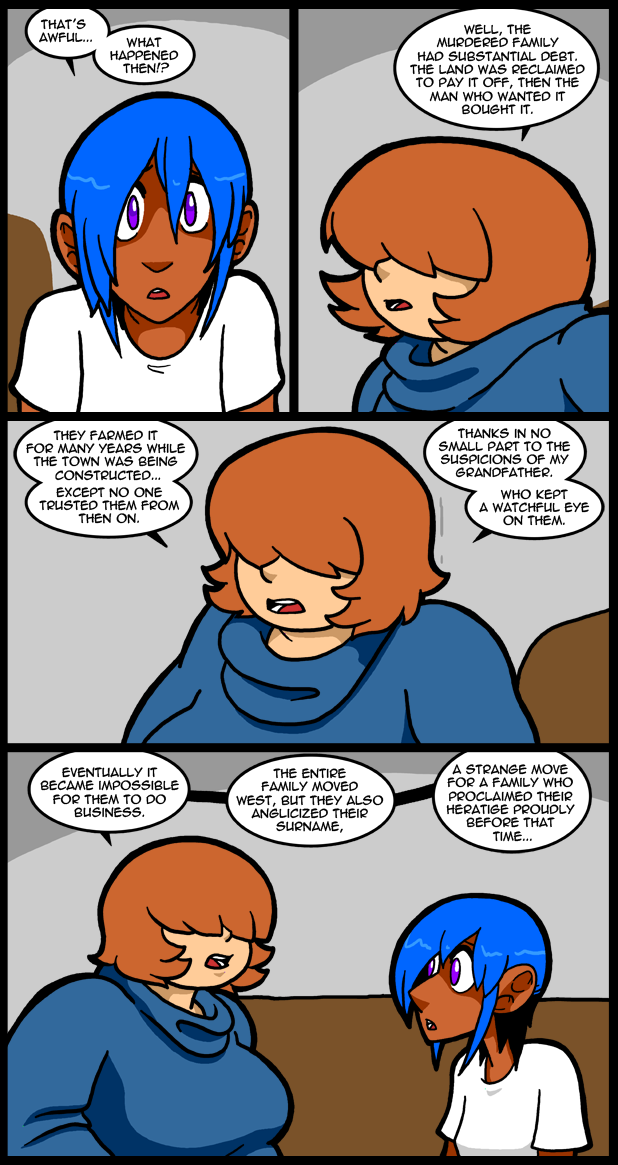 I forgot to mention on the last page that I researched common burial practices of the time period to make sure the story was plausible. That led me to the flu pandemic as a way to bolster Alex’s theories. The event was absolutely devastating. Still, burning a body is generally considered abhorrent for a multitude of reasons, so it was never widely done. Suspicion would have been warranted in this situation. Of course without anyone to enforce the rules around the unscrupulous will take advantage of the less fortunate. Hell, even with a complex system of laws the unscrupulous run rampant. Just imagine what it would be like without that. Well, you don’t have to. All you need to do is read a history book about the settling of America. That’s what happens. Eventually some kind of order will be imposed. Even tyrants hate disorder. In order to feel safe from unsavory elements humans will always set up some kind of system of laws. Of course the problem can then arise of too much law. Sometimes in our efforts to be thorough we go a bit far. (In addition to being racist and a host of other reasons…) Then the law gets out of control. As we see time and again in life balance is what we should strive for.

As far as the comic story goes it’s based on a mish mosh of events I’ve read about and whatnot. Not least of which is The Ghost In The Shed, which I’ve mentioned before. It’s not hard to look up, so I’ll leave that to you. The stories are mostly apocryphal seeing as the point of them, in part, is that the murders are unsolved. Of course families are ostracized out of communities for a lot less than suspected murder, even today, so no problem there.

and the plot thickens

Eventually you’ll need a chainsaw to cut through it.

Nah, the chainsaw would get all gummed up and then where would you be? Standing there with a thickening plot and a gummed up chainsaw, that is what.

You need to get some hardener before taking a chainsaw or a jackhammer to it. Mind you, if the plot gets big enough you might have to resort to a backhoe to get top the bottom of the mess.

chainsaw at this point we probably need a chain sword

Does this story take place pre or post civil war?

This would have taken place sometime around 1873 which is 4 or so years after the American civil war.

That would be eight years, since the war ended in 1865. Sorry, compelled to nitpick.

I’m thinking we are going to be very familiar with the anglicized NAME when it is finally revealed. Perhaps branch family relatives of the family in the Graves are also present somewhere amongst the cast….

I thought of that irony too

What if it was Carol’s ancestors? It should would make for a great irony twist

I’m just going to put this out there..

The Family that changed their name, are the ancestors of at least one member of the main cast.

That’s a pretty safe bet, otherwise we wouldn’t be left hanging at that last panel. The real question is, does he or she already know that part of the family history?

Some people REALLY don’t like it when you find something out about their family that paints great-grampa in a bad light.

my immediate thought was “What if Brooksie found out that the Lincoln family did it? That it was Jess’ ancestor who did all this… What if she found out that Carol or Nina belonged to the family who died?”

Then I summarized… Anglicized leaves Mike out, Wesley wouldn’t be much of an effect, nore would Reggie. John would really suck, and his name kinda fits the bill, but still wouldn’t be a grand explosion, although those two are close…

And then it made me wonder… What if she found out Nina, her beloved long time friend and smell to her clothes, was the descendant? How could she go to work then?

What if. What if it was a domestic thing….. But the Lincoln family was killed… and Brooksie’s ancestors killed them? Brooksie’s world would be shattered, crushed, pure’d and destroyed!

I’m totally with you on the balance thing …

Unfortunately as we keep learning things that give ‘normal’ people access to greater power, that balance point is probably going to keep lurching away from individual freedom … If someone suffering from what used to be called paranoid schizophrenia (or a psychopath, or fundamentalist nut job, … and yes I know there can be some overlap in those categories) turned violent 1000 years ago, they might have killed a few handfuls of people with a sword, 100 years ago they probably couldn’t have done much better even with a rifle, today they can kill hundreds (e.g. Timothy McVeigh) and any educated person with the right bent could probably come up with at least a few ‘clever’ ways to do ‘better’ than that. At some point this seems likely to become an existential problem and provides my personal favorite answer to the Fermi Paradox (http://en.wikipedia.org/wiki/Fermi_paradox).

On a lighter note, I wonder why you are so deeply concerned about the possibility that some of your readers might think they’d found a grave plot hole?

(note for the terminally geeky: per person power consumption over time: http://gailtheactuary.files.wordpress.com/2012/03/per-capita-world-energy-by-source.png — of course, this kind of power is not even the most dangerous)

Sorry to ask, is that supposed to be “heritage” in the last panel?

Brooke or Blackwell? Or maybe Lincoln.

Brooke could translate to Bach (like Johann Sebastian Bach) in German, but it could come from any language.
Blackwell came from living in a village in a dark wood, so it is possible it exists in other languages as well.
Graves has several German versions, Grawe, Graefe, Graewl, Graf.
Grace could come from any language.
Lincoln mixes Welch and Latin but the meaning (colony by the sea) could exist elsewhere.
Kepler is a German surname, so it is not anglicized.
Asel is not a surname (or word) I heard before.

Asel is a variant of the German Esel which means donkey or ass.

Never met one here, but it looks like several low-class names that got a simple change (like Schwein to Schwen) to polish it up.
But that also excludes him.

Asel is German for ass (or donkey) but it is also a surname; possibly a serf-name.

There is also a German surname Schwarzbrenner. Guess what it translates to in English?

I read that Blackwell came from living in an area with a stream with “dark water” whatever that means….

I now want to read a spin off series based on Alex’s Grandfather’s adventures.

Burning bodies is pretty common now, I know that cremations after funerals seems to be all the rage with a lot of people I know.