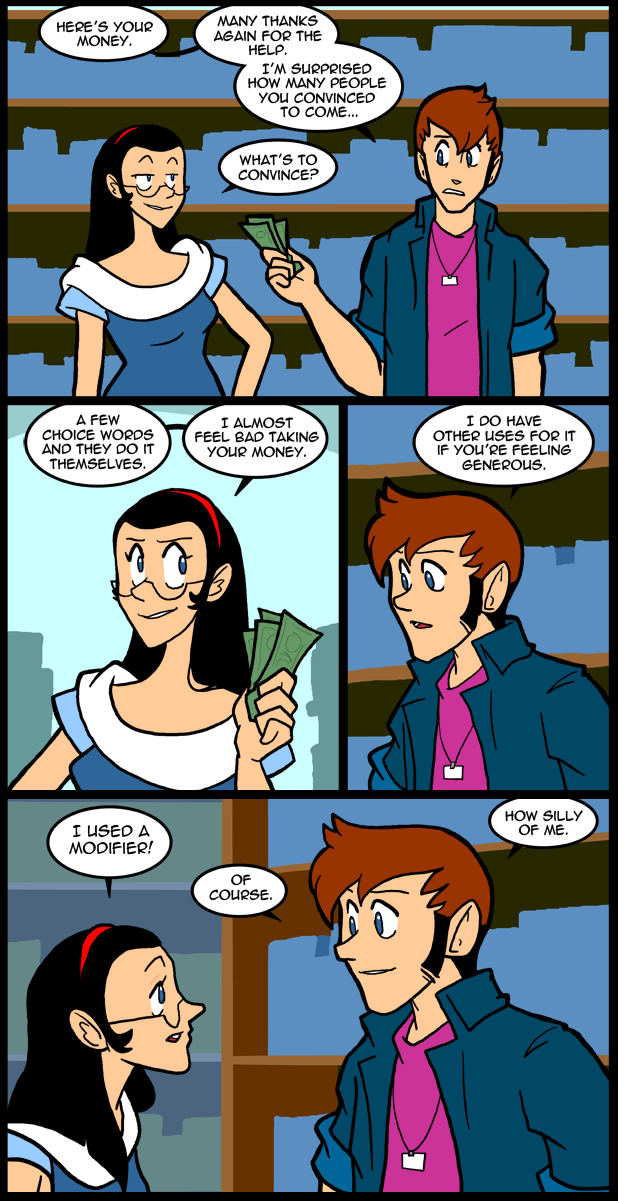 This should be a fun week for Jess fans. Hopefully it will be a fun week for all fans, but if you are particularly fond of Jess she, as is her way, steals the show. I had actually forgotten about her when I first started toying with the idea of Between Failures involving Ed. When she was included I thought I was creating her for the comic, but later on I found some old writings that made me remember her original creation. Strangely enough it was tied to the ideas that eventually evolved into the fiction story some of you have been enjoying. (And which sadly does not continue this evening. My apologies for that.) I even found some ancient drawings of her. At that time I really didn’t draw that much. Not when compared to the virtually endless amount I do now. I maybe drew her 2 or three times. Her basic design has remained the same through every iteration: girl Ed. I have come to adore her much more than in the beginning as she has grown as a character. She is someone who starts trouble and then revels in it. Things start because of her need to be entertained all the time. That’s a very important kind of person in fiction and in real life.

In other news, if you look to the sidebar you will notice a little Brooksie above the twitter feed. She is a clickable image link for the voting page of Between Failures, on some comic ranking site whose name escapes me at present. I’ve been asked to add such a link many times but never was able to get the page to accept it. This evening it worked. So, if it pleases you so to do, feel free to vote for Between Failures whenever you notice the adorable link guardian.

Ahhhh… Well, I hope she wasn’t trying to score a critical hit.

I can’t confirm that.

These little conversations you have with yourself are always so amusing. X3

See… cuz… most players only score a crit on a 19-20 but it has to be on the die… so if you have a modified 20 (15 plus and ability modifier of +5, for example) you don’t make it. Like wise, even if you roll a 19-20 you have to roll again to confirm. The confirmation can be a modified roll but we have a lot of “does not confirm” flying around at our table so this one made me laugh…

Only in 3e. In every other edition, there wasn’t any need to “confirm” it.

Yeah, no if you are playing Pathfinder you ARE playing DnD. It may be its own little off-shoot but it’s still freakin’ DnD. As in the following conversation:

Calling it D&D in our town is likely to cause us to lose the players we have because, since we were RPGA and people knew it was RPGA, any D&D games we played after the switchover meant 4.0. To call anything D&D is to make them question whether they want to play 4.0 or not and it has the added stigma of being D&D so people that aren’t already playing don’t want to be branded as nerds. PFS is more accommodating and accessible, won’t chase our players away and when you explain it as “basically 3.5 with a little tweaking” to D&D people, they get on board.
Sometimes I forget there are people out there that play at home and get to choose whatever edition they want to play, but, for us, we’ve been playing either RPGA or PFS almost exclusively for over 10 years now so the editions are sanctioned by whatever group you’re in.
Since there’s only one edition of Pathfinder, it answers the critical hit rule with no room for error which is why I mentioned it in the first place. And the above RPGA reasons are why I said “not D&D”.

I’d never played 3.x. I tried to play PF once. After 2 hours and still not figuring out how to make a completed character, I threw in the towel.

First time I played 4e, I had a character done in under 20 minutes. Even with all the added stuff, using the character builder, I can be done in 5 if I have an idea of what I’m wanting, and 15 if I don’t.

(* I knew my 3rd Grade teacher was a Grammar Nazi because instead of putting an X on a wrong answer, she’d make a little swastika… *)

Thomas still owes her somehow, he just doesn’t know it yet.

She already has her brother, Grumpy….

huh. Jess has always reminded me of Lupin III. I don’t know why.

Her unceasing desire for treasure, I expect.

Maybe I’m completely wrong, but I’m thinking the punchline was about a grammatical modifier instead of a tabletop gaming system modifier. In this case, it would be “almost.” Jess ALMOST felt guilty about taking Thomas’s money, but not enough to give any of it back.

That’s what I thought she meant! Then I saw all the comments and thought I might just be crazy…

And a great callback to the three kids from the “teambuilding” arc.

Im in love with Jo on the twitter feed art. Just YES!~

Is there somewhere that we can go to view the original Between Failures comic that you are always referencing?

Sorry, only a few of the parts survive. Not even whole pages in many cases. Plus, all the old sites are long gone.

Money?! Jess, I am disappoint.

I can understand why, though. She’s in college and money can get scarce.

Hey, I can finally view the site again!

No, just managed to chew through the straps enough to click the mouse. Yum….mouse…here little guy-I’ve got cheese!!

Some pages just don’t lend themselves to a lot of comments. I don’t know what the magic is about drawing in commenters.

Or rather I don’t know what magic draws in commenters.

Just benignly mention something either incorrect or vague. That’ll get it started.
Oh, you want the comments to be about the comic? … I’ve got nothing for that… Sorry… 9_9;

Well, there you go. Text wall!
We aim to please.

(scroll up for text wall)

But, I JUST scrolled down! All this scrolling! Geez!