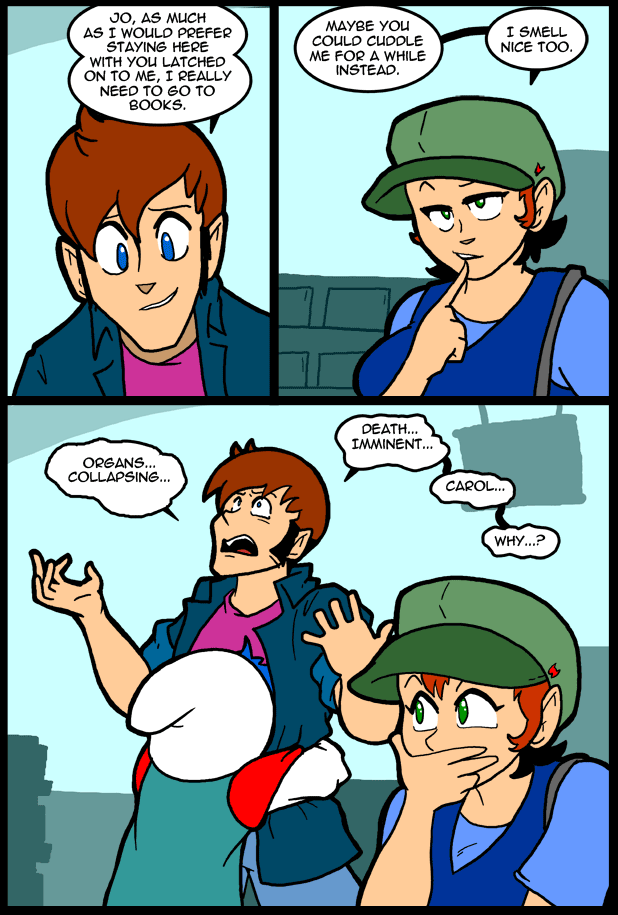 I can’t remember the last time I posted a page that was actually a single page tall. It just worked out that I didn’t need so much space so I decided not to stress it. Plus this is a pretty funny moment.

I didn’t have time today to write a bunch of new story, but I’ll write a bit more until I have to post the comic.

Eventually Niona stirred and cheerfully relieved him, although she did so without putting on any more clothing, which made falling asleep a herculean task afterwords. Exhaustion eventually overtook him though, and he settled into a decent sleep. When he woke up he was on his side, leaning against a warm, soft, something that was doing likewise to him. He rolled over to see what it was and nearly passed out as Niona slid her back snugly against his belly in her sleep.

Language fails to accurately describe the complex emotion soup Julius was feeling. Even through his clothing he could tell Niona had the nearest to perfect female body he had ever, and likely would ever, encounter. Conflict arose between factions in his mind. Part of it was just happy to be alive, to be experiencing this. Another part was annoyed, both with the embarrassment this situation would likely cause in the future, and about the fact that he had done his whole watch while Niona apparently decided it was okay to go to sleep. It wasn’t done in a haze of drowsiness either. She had placed her blankets over his and slid her bedroll flush with his own.

She had done this on purpose…

The thought did a few laps in his head. Was this a hint? He was terrible at reading women, but they did seem to have a certain kind of connection. She smiled and laughed a lot more than was usual for a first encounter. Did that mean anything? Had he failed to pick up on the signals? Maybe she was impressed with his knowledge of armaments. Who would be impressed by that? What was going on here!?

While the intelligent portion of his mind began its decent into madness the instinctual part offered up a course of action to the motor control centers. We should just put our had on her hip and see what happens. It suggested calmly. If she moves it we just get up and walk away. If she doesn’t…

Julius became aware of his hand moving. It reached Niona’s waist and all the noise in his head was replaced by complete focus on what he was feeling there. It slid a little further down to the curve of her hip and stopped. She rustled a bit. He braced himself for having his hand broken, wishing now that they were reversed in position and he was using his off hand. She began to turn towards him, his hand sliding across her tummy as she rolled. Her sleepy eyes met his and she grinned her toothy grin.

She did that on purpose

Behold, the power of awesome that is only known as…CAROL!!!

A statement that applies both to the comic and to the story.

Lol. Yup. She totally did. Just for kicks and giggles.

Now that was MEAN!

yay for between failures guy getting kind of famouse

There’s actually a part 2 to that QC comic, but I don’t know if Jeph got it or not. I made it real fast when he accidentally posted the other one early.

Can you post it here if QC doesn’t use it?

I have to start reading your comic earlier in the day. My oxygen depriving laughter almost woke up my roommate. :P I think Carol was not expecting so much response but defiantly a poke ment to get a reaction. Funny as hell.

Oh no, he’s lapsed into Shatner! Somebody… get… the doctor!

Damnit Asimov, Crave is an artist not a doctor!

I would like to respectfully request a desktop of panel 2. So good.

Also, Dude! Your story rocks and I’m looking forward to reading as much of it as you are willing to write and post here. I normally don’t get into reading text stories online as I much prefer a book if I’m going to read something without pictures, but this has totally captivated me.

Out of the 20 some daily comics I still currently read (of dozens that came before them) this remains my favorite this past year since I discovered it, and now a connundrum. I don’t know if I look forward more to the comic (hoping for more Nina as we go), or to the new story you’ve been writing. Starring lots of Nina.

Either way you continue to entertain greatly. Bravo

For a moment or two, I wondered why there was a giant smurf attached to Thomas’s torso.

Then I remembered Brooksie was wearing a hoodie….

Yeah, and Smurfs have blue in ’em too, right? Just not usually their hair…

Carol is evil. That is why I need to find my own 3d Carrol.

By the by, minor typo in the text story:
“We should just put our HAD on her hip…” had -> haNd.

When you’re done writing this text story in the blurbs, Crave, publish it.

I will buy it, and I will make all my friends buy it, because it is awesome.

I do actually know of a guy who had a burst appendix or some such similar malady after a particularly enthusiastic hug from an employee. Female, and not very big. She would blush when he would refer to her as “The Constrictor” after that. The problem was probably imminent, and she probably did him a favor in the long run.

Haha, I love it when these guys get silly. :D

Thus proving the EVIL of Gingers.

I forgot she *did* compound the problem! *laughsqueaks*