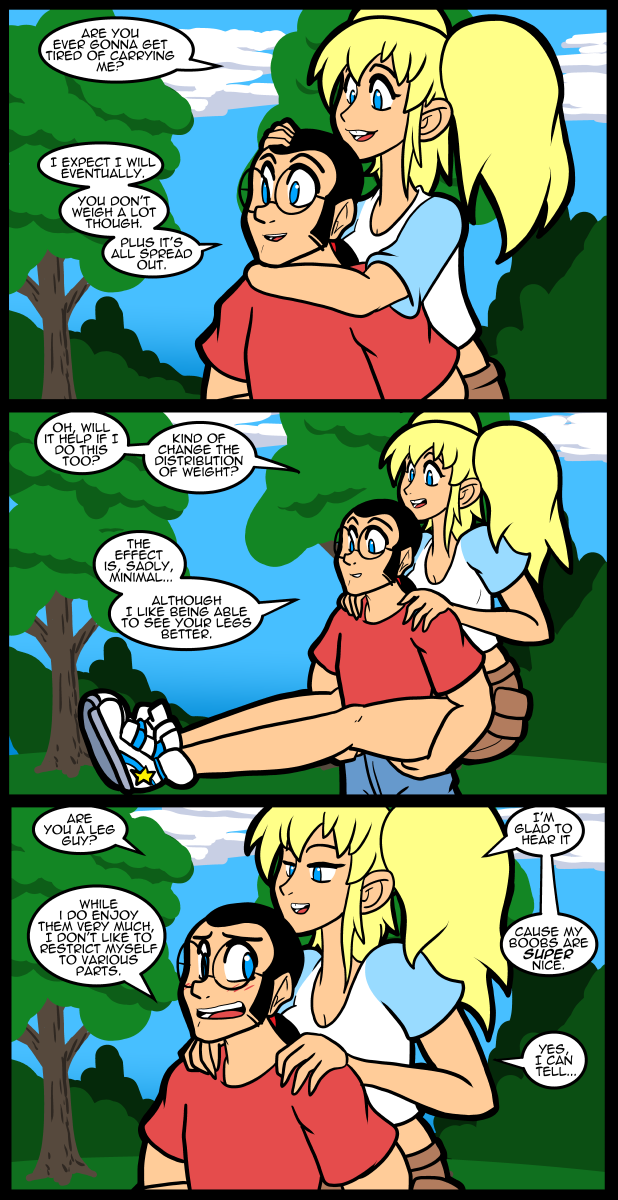 Legs are nice. Im a foot guy myself

Okay, I was watching this youtube thing the other day and the host read a comment about a guy wanting to see her feet. I’m not a foot person, but for some reason I really wanted to see her feet after that, even thought I know it doesn’t do anything for me. Maybe it was just because I hadn’t thought about it, but then it was denied in the same breath…

What you can almost see, or what’s withheld from you, is always more appealing than what’s just laid out in front of you. Forbidden fruit, I think the term is. This is the whole point of lingerie, for example.

Is that what it’s about? I never really understood lingerie… wouldn’t a careful selection of daywear used in a sexual context accomplish much the same effect?

Lingerie is also about accentuating features that are traditionally considered attractive. So, curvy bits, for instance. This is why suits are often called “male lingerie” by those of us who are into dudes, because it accentuates traditionally attractive male features, like broad shoulders and narrow hips. So, yes, daywear can create the same effect. It’s all about emphasizing the features that are most compelling and potentially disguising the parts that you might want to hide. Whether it’s with sexy undies, or nerdy t-shirts and skinny jeans.

That’s basically the attraction behind roleplaying and cosplay, some clothes are just appealing in the way they cover, or what they cover.

Let’s be honest, all of her is super fine.

I’m really enjoying the build up of their relationship and their interactions as a couple.

All though what man can resist a good pair of legs

Pics are never as good as experiencing it in person. ;) Which I have a feeling one day Ed will find out.

He kinda is right now.

not yet. this is just the previews. the main show happens later on. lol one of the things i’ve learned (and really isn’t taught these days) is women are just as sexual as guys but they have to be comfortable with you before they really show it. Teasing is one thing, it is ment to get attention. Actual sexual conversation, etc. is on another level.

Ida know. Never really realized how many nerve endings are in the human back till a well built upper grade girl leaned over my shoulder to show me something. For the life of me, I can’t remember what it was. As I was still in school, this was over 20 years ago. Pretty vivid memory, I guess.

I had a similar experience to Ed’s, in high school.
It wasn’t a Nina-looking girl hugging my back, but something that was like that.
And, like your story…I don’t [remember] a whole lot, from the the rest of that day!

I must be the only one in this list of comments who can’t relate then. I’m kind of the gross spud of the group of friends. People enjoy hanging out with me, but if the females aren’t clearly not into my, I have a natural tendency to push folks away, even when I’d actually like to get more acquainted. Troll-mentality, I guess.

time to clean up your act then. if people enjoy hanging out with you then that is half the battle right there. get into shape, relax and just be confident. if a lady you like shows interest then treat her with respect and have fun. very few guys get every girl so don’t sweat it if it doesn’t work out. women have their own tastes and like men who best “show them off” so to speak.

I rolled a five star Takumi when I first started playing. He is all I will ever need. I rolled a five star “Money Maiden Charlotte” after spending all 80(ish) orbs I’d saved up during the Bridal event. Not sure if she’s really useful though, the rest of my team is too high to find out.

Takumi is one dangerous fucker. People who have him tend to think he’s invulnerable, but he’s not. If you take him down most teams fall apart. The ones that don’t… Those are the real masters. I’ve only fought a handful like that and rarely walked away a winner.

Exactly. Placing him with a good defensive unit and a flier tend to make up almost any team comp that I’d play, but he’s too good for me to know how to actually make a team.

Early on my only good units were Cordelia and Julia. While I love them both dearly they both got destroyed by Takumi (Cordelia could sometimes kill him with brave lance before close counter could kick in, but not always). Once skill inheritance became a thing, I decided to give Julia quick riposte just so she could bait and defeat Takumis in one round, and not have to deal with vantage or the rare rehabilitate healer.

Hector was still an issue for me, but thankfully I got a Ryoma from the Hero Fest so all my bases are covered now.

Are you playing the game completely free, or have you put in any amount of real money into it? I’m playing Awakening, but curious about the mobile. Is it usable offline?

I’ve paid about $15 or so? They are really free with the orbs if you’re any good at all, so you don’t need to pay anything at all. I just like to support things that I like monetarily. It has to be online to play at all though. At least to start it up.

lol this is getting hotter than sex XD

The “Boobs of Steel” team…

Man, Ed is in great shape.

I gotta ask though, was there much intentional inspiration taken from FMA for your short guy named Edward whose love interest is a pretty, smart blonde girl who’s taller than him, which he’s kinda insecure about?

This isn’t a criticism, by the way, I just find the similarities between the two Eds to be rather striking and I love FMA.

Ed was originally designed four decades before FMA. All of the things that are similarities are coincidences. I don’t have time to discuss it at length but I think the two authors subscribe to similar storytelling theories more than anything else.

I loved the Fire Emblem games on my DS, only thing I used it for, aside from Pokémon and of course Advance Wars. You got me interested, I think I am going to check this phone game out.

Nah man Agrias Oakes is where its at. Although TBH Meliadoul Tengille is a baller all destroying weapons and shit…

Lest see how long he can carry her while having a raging hardon.

I don’t limit myself to parts either but I do like boobs, butts, and bellies and legs.